Hello KI Community and welcome to the new forums!

Here is our official bug reporting thread to let us know of anything you may find in Season 3. Please follow the instructions below.

In order to help us get the most out of your bug reports, please follow these basic guidelines when bringing a bug to our attention.
When posting in this thread, please be as specific as possible. If we can’t recreate the issue we won’t be able to figure out what’s wrong.
Be concise. Try to get rid of unnecessary steps so that we can get straight to the problem.
Here’s a basic format that everyone should follow when reporting a bug -
Provide a brief idea of what the bug is.
Describe what the bug is and then provide steps that recreate the issue. If you can include a video that would be awesome!

TJ Combo can perform his Ultra Combo an infinite amount of times.

Perform TJ’s Ultra.
Backdash after TJ launches the opponent into the air.
Perform Shadow Tremor.
Perform Ultra Combo again.
Repeat.
That wasn’t so bad now, was it? If you don’t know how to perfectly recreate an issue, don’t worry. Just try to be as specific as you can and provide a video if possible. We’ll handle the rest from there.

Also, If you are new to Killer Instinct and playing it on Windows 10. Please let us know your PC specs and setup with your report.

Thank You everyone
Iron Galaxy Studios

Not so much a bug but more of an oversight. Arbiter’s win animation on sadira’ stage shows a few camera angles where the stage hasn’t been modelled.

I can’t buy anything from the store. I keep encountering this error (see screenshot). It is a different error number each time. Is this happening to anyone else? 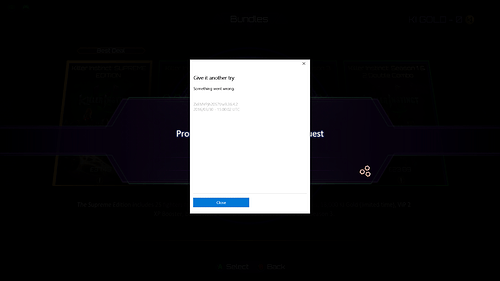 My Shadow Jago does is locked behind a paywall even though I bought the community bundle pack for him back in May of 2015. He’s playable on the Xbox One, but not on Windows 10 (which is what I have access to right now).

I’d also like to add that both achievements “Survival Arbiter” and “Stylish Arbiter” won’t unlock for me, but I was able to get “Arbiter’s Endurance”. My Arbiter is a Level 12, so I should have “Stylish Arbiter” by now. I should obviously also have “Survival Arbiter” unlocked since it’s for winning 1 survival match with Arbiter and I already have “Arbiter’s Endurance”, which is the same thing except I needed to win 10 survival matches.

I downloaded Win10 ver. KI 3/29 morning. Didn’t fire up because I knew that I have to start up X1 ver. first to transfer my process and purchase licenses.

Approx. 8PM on 3/29 (EST), I fired up X1 ver., got the message that I successfully transferred the save files. Played some matches then quit.

Started Win10 ver. it says the game found my save file. After the process I only can see my stats, levels, unlocked accessories & etc.

However, my purchase licenses are not properly transferred. The game kept saying I have to purchase characters or bundles.

I think the Xbox Live server issue during yesterday might affected the transfer process.

Please fix it. My friends have no issue to get their license on Win10 ver.

I can’t play the game on xbox one. It crash in the searching for dlc screen.
I reinstalled the game, deleted my save data to resync with the cloud and nothing works.
I hope to get a fix or an answer fast. I don’t want to lose my progress from almost 3 years.

I am currently having a problem on PC. I bought S1 Combo Breaker, got the Ultra with GWG, S2 Combo Breaker and S3 Ultra all on Xbox. However, when I log in, the Season 3 characters are all greyed out while I have everything else in S1 and S2.
Arby, Tusk and Kim have the “Available in” timer over them and Rash isn’t available while they are all available on my xbox version.
The double XP Booster works fine on xbox but isn’t present on the PC, but I do have the KI Gold.
I have restarted my PC and the Xbox app a number of times, but it is still occurring and it doesn’t seem to recognize the S3 ultra I have on the PC no matter how many times I restart the game, the app and my PC. But it works fine on xbox and my save transferred perfectly

Thanks for the thread.

Arbiter can follow up both of his shadow linkers with anything, including regular linkers. The rest of the roster has to use an autodouble or manual to combo after a shadow linker. I don’t think this is intentional, since it isn’t mentioned anywhere in his command list?

The exact same thing happened to me and still is

The game has started to freeze & crash with a loud buzzing noise since the Season 3 update.

Mortal Kombat X did (and still does) the same thing too…

More of a suggestion but on Windows 10 the game plays at max volume when it launches. So for the first 20 or so seconds before it loads your sound settings its really loud. Since it has no .exe you cant adjust the volume with the sound mixer. Be nice if it loaded your settings before the press start button menu or if the volume was slightly reduced.

Found a bug with Maya’s Ultra combo. I was playing a Cinder on ICEHAVEN and her pinwheel spinning daggers knocks down the opponent, then she keeps throwing her daggers before she performs an air knee, hangs there and then game goes to her victory pose. Happened just now. It did it every time on that stage today 3.30.16. I played all day yesterday and it didn’t do it then. Strange!

Pre ordered S3 Ultra Edition. When checking for ultra accessories on the new characters regular costumes it is making me pay gold for them. Have confirmed others have them unlocked. Playing on xb1.

I’m playing on a keyboard and I remapped WASD to arrow buttons (left, right, down, up accordingly), kicks to 1, 2, 3 on a keybad and punches to 4,5,6 on a keypad. When I restarted the game punches and kicks are saved but directional controls are back to WASD.

Omens Heavy Orda shield only hits 2 times and does not launch.

Since yesterday I have been unable to play KI on my X1, before the update was was out I was re-installing the game but while I wait for the game to download, it says I can play it while it’s installing, so I did, but after the menu screen where it says “checking for downloadable content” it crashes and so I think since it’s still installing that’s why it crashed, but after it installed it keeps crashing after the menu screen, I tried restarting the xbox, un-installing the game and re-installing it and it still keeps crashing at the same place, I PREORDERED THE ULTRA EDITION and I still haven’t got pass the menu screen, please fix this issue!!! PLEASE HELP!!!