Oftentimes, I see questions or general misinformed statements in regards to why “Move X beat Move Y” or things like “That makes no sense, I hit him first!”. Having a general understanding as to why certain actions take place within Killer Instinct can overall make you a better player and take your understanding of the mechanics to higher levels. 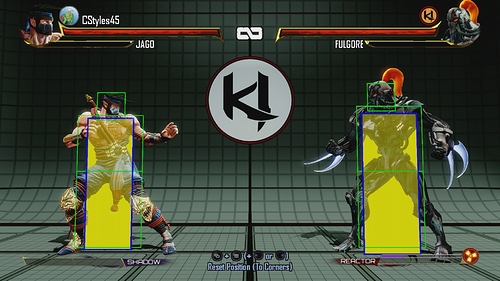 First off, there is already an in-game Dojo Lesson which gives you a general understanding of how Hitboxes work (Dojo Lesson 24). I highly suggest you go through that brief lesson first. 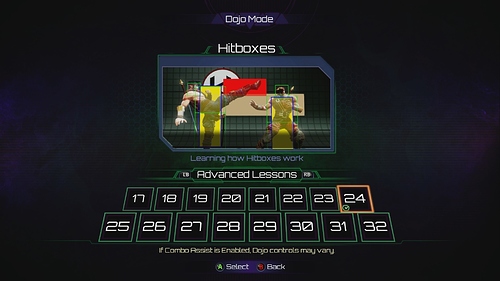 Hitboxes option is located in the Practice Option Menu once you pause the game in Practice Mode: 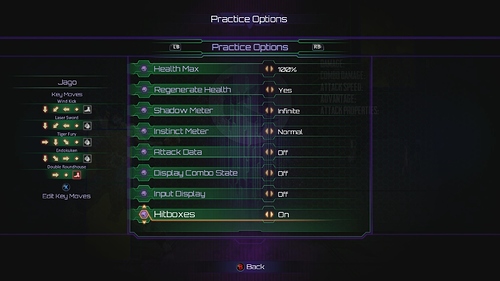 Additionally, it is important to understand that Killer Instinct implements a Priority System. It should be noted that the priority system ONLY comes into play when the two character would hit each other on the SAME FRAME. The Dojo Lesson briefly outlines this: 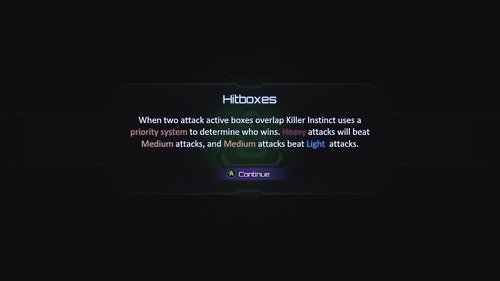 To further expand on this, the full Priority System breaks down the following way:

Also, you may find in your time practicing in Training Mode that there are a lot of different color boxes all depending on what move you’re doing. But what do they all mean and how do they interact with each other?

You may also see Solid Tan boxes – these force the opponent to block if they are holding back, and are known as Force Block or Proximity Guard boxes.
Solid Pink boxes - Kan-Ra has a bunch of these. They are active Attack boxes that you cannot trade with, so they don’t double as vulnerable boxes.
Light Green Boxes - You’ll see these on projectiles, but you may also see a Projectile Destroy box attached to a character that is a similar color.

Another great tool that is available in Practice Mode is the ability to turn on Attack Data. This information help tell you valuable information such as the damage output of your moves, their speed, frame advantage, and any additional attack properties the move may have.

Attack Data option is located in the Practice Option Menu once you pause the game in Practice Mode: 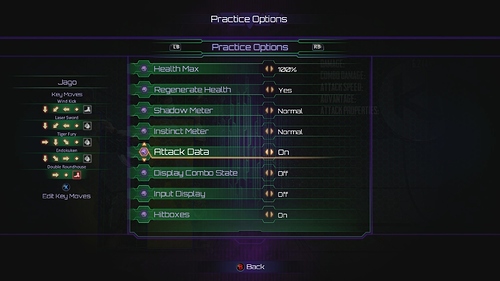 Once enabled, you’ll see the following information on screen:

As you attack your training dummy you’ll see all these values change depending on the attack you’re doing, but what do they all mean? Let’s break it down!

Let’s explore each one individually:

Damage: First off, it’s important to understand that the damage values of moves in Killer Instinct are calculate based off of Damage Points. Each health bar in Killer Instinct has a total of 360 Damage (Health) Points. Take for example Jago’s Standing HP. Attack your opponent and it shows a value of 30.0 (200%). This means it does a total of 30/360 damage points on your opponent or 8.33% damage. The 200% represents the amount this move’s damage is scaled. For those that weren’t aware, the first normal you do prior to your opener in a combo receives a bonus of double the damage, that’s why it shows 200% and that’s why it’s always optimal to start your combo with your strongest normal attack!

Combo Damage: Same principle as basic damage but this time focusing on combos specifically. Normally, when you do a combo, you see directly on screen how many hits it was and the % of damage dealt, but oftentimes this % of damage is a rounded number based off of the same formula above being out of 360 Health Points. Take for example a basic Jago combo of Heavy Windkick, Heavy HP auto double, DP ender. 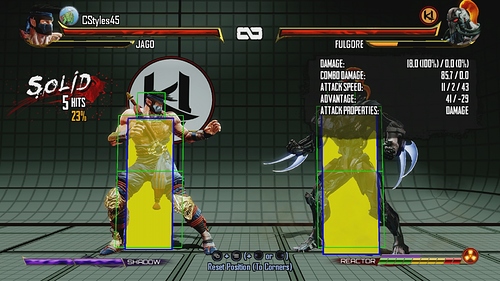 The second value while performing the combo is the Total Potential Damage of this Combo aka White Health. This is the amount of recoverable health your opponent will have assuming you do not perform an ender or “cash out” your combo.

As an example to see how the values match up, perform Omen’s Demonic Despair on your opponent in Training Mode. 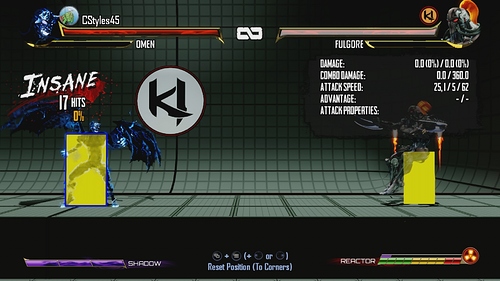 Attack Speed: The values found here represent the amount of frames it take for a move to come out (Startup), how long the attack stays on screen (Active), and finally how long it takes for you to attack again (Recovery).

NOTE: For Shadow Moves only, you will see two separate values for the Startup Frame. The first number is the amount of startup frames before the “flash” of the shadow move and the second number after the comma is the amount of startup frames after the “flash” of the shadow move. A move that is 0 after the flash is not blockable/avoidable unless you already are blocking/avoiding. Example, Thunder’s Shadow Command Grab is 5,0 which explains why you can’t jump out of it when you see the flash…because it’s already too late!

Both Frame Advantage and Attack Speed are covered in a basic sense in the in-game Dojo mode (Dojo Lesson #25) be sure to visit this to get an in-game understanding: 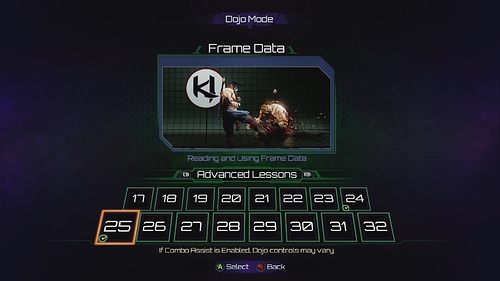 Attack Properties: Refers to any special properties that a regular move or special move may have the could be advantageous to use in certain situations. Additionally, it shows the properties of each ender type you have for your character. Examples of various ones you’ll see are:

Hope this Guide helps people in understanding these two very strong and informative tools available in Practice Mode and hopefully will help you in your overall gameplay in Killer Instinct. Special thanks to @TheKeits for the help with the information.

If anyone has any further questions or comments, please use this thread to discuss.

Thanks for this - It should prove useful to myself and others who are in the intermediate stage where we know how to play (mostly) but don’t understand the full tech of the various forms of data and exactly what they mean. I am not a lab guy, as I find it intimidating and feel my time is better spent playing actual matches and learning through trial and error, but things like this thread give me enough of a handle or head start to want to try some things out in Practice in the future.

Where do throws fall in the priority system? I know a throw will beat a light or medium normal on the same frame but I don’t know about heavies or specials.

I thought It was a rock-paper-scissors of Hits-Throws-Blocks, with hits beating Throws. Why do throws take priority over hits?

RPS “Throw beats Block beats Attack beats Throw” is a wild oversimplification of what goes on in a fighting game, but it helps people understand decision making sometimes. It doesn’t mean that one thing beats the other thing in a same frame trade in all fighting games ever made.

Hang on, wasn’t throw priority changed to be below a light attack midway through season 2? This meant that in a neutral situation a 4 frame jab would beat a regular throw?

On topic, fantastic guide @CStyles45, thanks for making this. I have been pondering making a video for all this for a while but never got round to it (I’ve never made a tutorial video before so it’s a little daunting, especially as the topic is so broad).

I hope everybody reads this. I die a little bit every time I see someone say stuff like, “my character is bad he has no priority”… like priority is a rating category in a Madden game.

Just a small question guys. What is the easier way to check in the Dojo if an attack is overhead?

The thing that bugs me here (and has bugged me for some time) is that health isn’t truly a 360-point scale: there are fractional points. Whilst the most important thing here is that we know how much damage each move deals relative to the total health of the character, it’d be nice to know what the smallest possible quantity of health in KI actually is (please please please don’t be a floating-point quantity), and how many of those make up a health bar.

I think you should add, that you read the frame data differently than in other fighting games.

Let’s say, you do a move A that is -5 on block. Correct me if I am wrong, but in every other FG when you search the frame data list for a move B that has 5 frames startup it will punish the first move. That’s because the last startup frame is always the first active frame. That is NOT true for KI frame data. While KI’s frame data system makes way more sense to me it irritated me at first.
So for my example, you have to look for a move that has 4 or less startup frames to punish move A.

Easiest way is to record the opponent holding down back then do your move and see if it’s blocked.

This just makes me realise how much I’m still missing out on by not having the Dojo information in the KICG/an accessible format. Hopefully that’ll be rectified soon, I have at least one person in the planning who might be willing to write it.

I die a little bit every time I see someone say stuff like, “my character is bad he has no priority”

Lol. Yeah, that one’s a pet peeve of mine too…

Good stuff Styles - hopefully new (and maybe a few older) players take a look at this.

So I’m going to say something, but before I do I wanna let be known that I think this is an excellent and very informative thread. @CStyles45 did a really good job and I’ll probably take more than a couple looks at some of this sweet KI info. Now having said that, I have question, why exactly does this game carry over Street Fighter’s way of handling hurtboxes?

What I mean by that is, why aren’t the hurtboxes more accurately tied to the character’s model? Honestly I think that’s the biggest offender when it comes to players not understanding an exchange, and I can’t see the reasoning to not having them more accurately tied to the character. Now I’m not demanding a change or anything, and I realize it’s pretty late in development to re haul something like that. I’m sure it would probably be extremely difficult to adjust coding wise. Also I understand that functionality sometimes takes priority over something making sense visually, but the degree in which it’s at with the character’s hurtboxes currently perplexes me, and I’m trying to understand why it’s the way it is…and also why no one else seems to be bothered by it.

Idk about any of you duders, but one of the reasons why I don’t like SSV is my attacks go through my opponent, grabs are absolutely horrendous in that game, and seeing the same thing, to a lesser degree, in this game doesn’t sit well with me.

It’s because how a character moves is aesthetic, and how hitboxes function is design/balance. If someone always had to change an animation every time they changed a hitbox, the game would never get made.

Naturally, you want them to be “pretty close” to each other as much as possible, but this is the reason why they’re not the same.

A game like MKX makes your model’s hitbox almost identical to the polygon collision of the character, which means a) that game animates incredibly poorly on average and b) adjusting hitboxes slightly to tweak balance is, as far as I know, not something they do very often.