Do I get a ■■■■■■■ certificate or a degree for passing some overly complicated test on FIGHTING GAME MECHANICS? 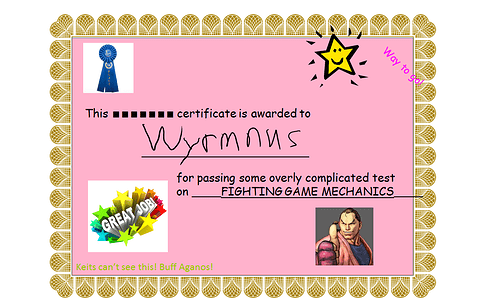 Congratulations. You earned it.

It’s because how a character moves is aesthetic, and how hitboxes function is design/balance. If someone always had to change an animation every time they changed a hitbox, the game would never get made.

Its also a feel thing. Seth Killian used to tell stories about early versions of SF4 that didn’t use traditional 2D collision (hitboxes) and it just never felt ‘right’. The truth is that a game in this style where the collisions are isolated to the small limbs/weapons of the animated characters doesn’t feel good. I realize thats subjective, but I’m not a fan at all.

Interestingly, when SF4 Frame Trapped came out, I played around a bit with the hitbox viewer (amazing program btw). A lot of the original characters DO still have 3D hitboxes on their moves. For example, Ryu’s tatsu has a hitbox that swings around with his leg in 3D, and in order to apply the collision to their opponent’s hurtbox, they simply project it into 2D when needed. There were a surprising number of characters that had these 3D hitboxes, clearly a holdover from the earlier version of the game and they just decided it wasn’t worth their time to redo these, I guess.

Wow I didn’t know this. Projecting a 3D translated hitbox to a 2D plane seems pretty clever in my eyes. By linking the hitbox to the attack animation you avoid having to animate it individually, in Ryu’s tatsu case going from left to right.

This is great. Was just working with RAAM a little and noticed his shadow stab is 3,4 (or was it 5,4?) on startup and was really wondering why there were two numbers there. Thanks for this!

Yep, this is one of the most useful posts on the forums, particularly for anyone who’s interested in getting to understand frame data but isn’t sure where to start.

Since throws are light attacks, does that mean in the KI system it can never trade (or win in it’s case) on the same frame? I kinda do figure it loses every time in this scenario but just wanted to make sure.

Throws have their own priority, iirc it is higher than heavy normals.

So in the priorty chain it goes

Also, where do projectiles fit into this chain? Do projectiles function like air attacks and get -1 less value? Because apparently shadow projectiles lose to DP’s but shadow moves like orchids shadow flik flak beat out regular 3f dp’s with no trades.

excuse me Mr. @TheKeits If you could kindly help, I have one question. In the replay mode of KI, there are options below that allow you to audit the time of the match, I have a question about the option that says “frame step”. What EXACTLY is frame step? what is its purpose in the game? Your help would be gladly appreciated and I will use this knowledge to spread to the killer instinct community, thank you.

Well I’m no Keits but frame step let’s you see the game one frame at a time. The game normally runs at 60 frames per second. You use it to study frame data and see any weird interactions slowed down so you know exactly what happened.

sithlord i’d kiss you but im not into that, THANK YOU!

If your in practice mode you have a variety of options and setting to fiddle with. The “combo state” is what your looking for. I think. It will tell you

@GalacticGeek This is probably a more appropriate place to continue the discussion on understanding frame data.

And courtesy of @Infilament:
But if you just want to know “hey, am I gonna get punched in the face if this move is blocked?”, then you just look at the result of all that math, which is the block advantage number [X on block].

Maybe you won’t block it because you take your hand off the stick to eat a banana, but you could have blocked it if you were playing well. (

This came out of nowhere and cracked me up.