War. It never stops. But we know to respect our soldiers, for fighting against the evil.

DESCRIPTION: Tournament is consisted of 26 players, each player gets a randomly assigned character for the entire event. 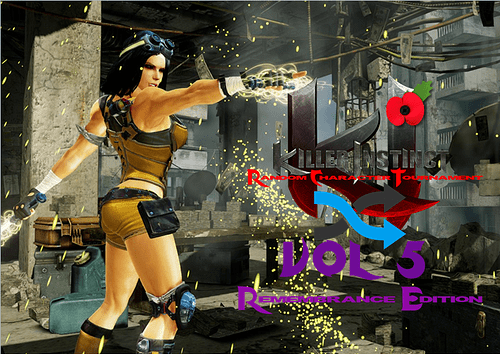 I can imagine streaming the next tournament if people would like that!

Hope you recovered from that Devil Beam, Xeno.

GGs to you too bro. Oh and if that happens, I just might win the whole thing lol.

Lol that will be great

@PVXenoraptor Q: Will you be incorporating the XBL Arena features into this series, once available, or will you stick with Challonge?

I have to admit, I’m not as excited about the prospect of signing up after the way vol 4 was run.

I signed up anyways, because despite my reservations, I want to see this succeed.

Hmm… Hey, can we play RCT on Saturday? If we can’t, then I will accept that. It’s ok.

Here’s a suggestion for Vol.5: Let’s not get characters assigned until a day before the tournament.

I already have reservations about participating again. If it were run that way I’ll say now I would have no interest in entering.

I’ve signed up, it’ll be a good way to learn a new character I guess.

When do we find out our assignments?

That’s how its always been planned but for some reason it never ends up that way. Its like a kid with a secret that cant wait to tell everyone and then just caves in and tells everyone. Then people drop out and new players join and get a non random character.
Its pretty simple…not sure why its so hard to stick to this.

Ill join in again, but isnt that Thanksgiving weekend? Thats not going to work so well for US players.

Good point.
@PVXenoraptor Have you ever considered making separate tournaments? Like one for each time zone? Or would it be more complicated that way?

Likely more complicated if we broke this down per time zone, because that’s even more people to register and keep track of plus needing additional times/days for it all.

And after two top 8 performances, I think I’m going to take a break for now. Had a blast as Glacius and happy to go positive this time around.

Just a suggestion, but instead of multiple tournaments, why not have a second stream? It would be difficult to guarantee the extra commentary and stream, but it would allow a couple of extra admins on the Challonge log and let us stream every match but shorten the overall time of the tournament (like, one stream for winners side and one for losers).

Aw. That’s Thanksgiving weekend. No join for me…