I still think MS should just make thier smash all-star game instead clogging the KI roster with guest.

One or two is enough.

The CyberPunk Thing really exist in this REBOOT?

If Joanna makes it in the game then a perfect dark reboot is happening and I know it’s going to happen in the next three years.

They can use a runner from Shaowrun as well. Have a super cyber punk street samurai.

If Joanna makes it in, one of her outfits better be a trench coat.

Maybe not the stereotype cyberpunk that we know and love, but in a way, it’s there.

TJ Combo has cybernetic enhancements, Fulgore is a Cyborg and Aria is an AI who downloads herself to multiple drones for achieve physical form. I’d say KI had a form of cyberpunk to it. Tech-noir perhaps? Certainly Sci-fi anyway.

Trenchcoat, combats, that slick Chinese style dress, there’s a good range of choice for her.

True, plus Joanna has backup.

Elvis, Jonathan, other Carrington institute agents, other Maians. She could have an airstrike, strafing run or even an orbital strike for a special move. She just needs to call it in.

I initially thought Kameo would have been the obvious choice, especially since she has the power of the elements and well we have a Fire character, An Ice Alien, A Rock Gollum, Omen lol, etc etc… A number of us have already seen the Kameo unfinished artwork by MS/Rare in her original outfit but I never saw the one with a bow until yesterday: 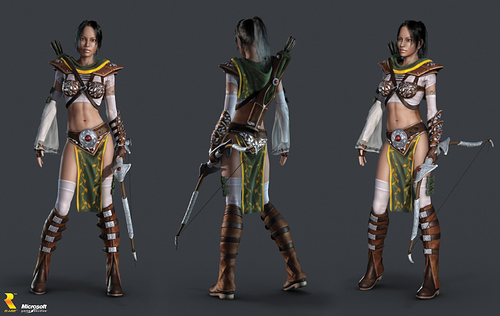 I made up a semi story line in my head for her, Aria some how gets ahold of her and using all the tech she has gathered over the years, corrupted and ended up controlling Kameo. Kameo having the power of the elements would play a big part in the characters archetype, maybe she could absorb an element and use it against a character.

Either way, I really though if they were going to do the guest it was going to be down to Joanna or Kameo, and I would still like to see either or both in the game at some point! Maybe Season 4

If we were to get a gunner type guest character…I hate to say it, but I think Master Chief would definitely steal her lime light.

I dunno. If they played differently enough, I could see Joanna Dark and Master Chief coexisting in the game just fine. I feel like Master Chief could be more of a slow moving, heavy gunner type, with machine guns, rockets, plasma grenades, big, bulky melee hits for combos, etc.

Meanwhile, Joanna Dark could be more of a fast moving, stylish, twin pistol, juggler, acrobatic type of gunner who’s maybe more of a foil to Orchid with the gymnastics, but with more of edge toward the spy gear in terms of her special moves.

I personally think that if MS is using Shovel Knight and KI and what not to rebuild the Battletoads brand, that they’d be crazy not to do this with Joanna Dark as well. She’s a fantastic character. One that should be much more of a major staple in MS’ library than she’s been.

Master Chief or Marcus Phoenix might help sell more KI, in which case, I’d welcome either of them. But I think that there’s an audience that would buy KI to use Joanna Dark as well and personally, I want to see her in games again. See her get another chance to shine.

I still think MS should just make thier smash all-star game instead clogging the KI roster with guest.

One or two is enough.

Yeah, but I think that most people are resigned to the fact that there will definitely be more than one guest character, so the game will get at least a little clogged with guests. I don’t think they’ll go overboard. I’d be shocked if it were more than three. My guess is two.

To your point though, I’d play the heck out of an MS fighting game if it were done right. 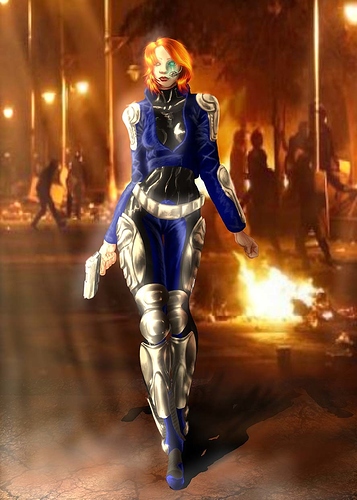 Here’s how I envisioned her. Pretty much the same as her standard get up and based loosely on racing biker gear, her armour has been given a shiny metal finish just as she had in Perfect dark.

So for the sake of accessories, you could exchange her boots, jacket and maybe her hair cut to give her the different varieties we have seen from the two games.

I did post this in the last rendition of the forum, but I have no clue of how to design her move set or fighter mechanics. I imagined her as playing a bit like Bayonetta, using a form of auto-doubles at range, but like I said, I am hopeless at fight mechanics, so I’d leave that to those that do know and just contribute the image.

Joanna would be an amazing character. I envision her as a gun-kata practitioner with flashy acrobatics, dual wielding twin Falcon 2s, akimbo-style. She could have a unique ammo gauge mechanic where she would need to reload her guns constantly to access their specials. For her Instinct Mode she gains access to new gadgets such as the BombSpy and Laptop Gun.

I just came up with it as a way to use real life things like the biker gear, rather than just copy/pasting what’s already out there.

I had hoped the design was different enough without loosing the iconic essence of her general look, keeping the comms unit and the colours relatively the same.

I agree with this. Make a smash bros featuring all the rare and other popular characters and leave the serious and fascinating to KI.

So lon as it’s not a capcom character, or anything like that I don’t care who the guest character is.

Adding joanna would keep the game serious she firs perfect

The toad not so much …

Is it possible that Historian from the old forums hinted Joanna’s inclusion from the thread he made about her not too long ago?