About Eyedol's design and the struggle to redesign him

Everyone knows the folks at MS & IG have seemingly been having trouble taking Eyedol’s original design and making something new out of it, @TempusChaoti has said on several ocassions that they’re not really sure how to take a harryhausen claymation monster and make it current and tolerable in this day and age so I just wanted to voice my opinion on the subject and inject a few of my own suggestions into the mix. Though I’m sure they have their own ideas, so if he’s already on the way just give this a chance.

His origins:
Firstly, I’m not sure why the theme of the original design is such an issue. Yes, he looks goofy as heck in the original game but so did every character. I don’t think the harryhausen roots are a problem at all, as all characters in KI are based off of some weird trope and for the most part still reflect that in the new KI. Spinal was literally right there from Sinbad in the same era as the classic cyclops character yet his design was change minimally and still stayed relevant.

Eyedol’s trope, his entire theme is classic movie monster. It doesn’t NEED to be drastically altered, he’s just representative of a style and it should stay that way. “Harryhausen” is starting to sound like a derogatory term when developers refer to Eyedol and I think that should be part of his charm, overcoming this shouldn’t be an issue. Instead embrace it and make it his thing, instead of struggling to remove that feel from his being.

His new design:
That being said, of course update him, make him look better and more interesting just as all of the characters have been. When asked about Eyedol Adam often makes a point to talk about his satyr legs as another point of his awkward design, frankly that could be removed easily. Give Eyedol two humanoid muscular legs and make him more of a two-headed troll looking character, he doesn’t need hooves.

His weapon the club could also be reworked, it was said that Eyedol’s design might conflict with another character in season 2, Aganos because he also has a clubbed weapon during instinct mode. Eyedol’s weapon doesn’t need to be a club, he could just as easily made due with another over-sized weapon such as a mace, a massive flail, a huge battleaxe or even a warhammer.

The community wants this character, some of us more than others. Honestly I just want him back in the game, if MKX can make room for Goro of all people, KI should be able to squeeze Eyedol back into the roster. We’re willing to compromise, his moveset was cheap we get it so it has a lot of room to expand. His look was goofy we know but he’s capable of growth. Frankly the only feature of Eyedol that HAS to be retained is the two-headed cyclops part, everything from the neck down is open season. Go ham on it, just keep his base design and we’ll go nuts for it. Save the satyr legs for the retro outfit!

The lore:
Squeezing Eyedol into KI’s story isn’t as hard as people seem to think. Eyedol was always Ultratech’s trump card, their brainwashed monster that was going to do their dirty work. There are two very easy ways I can see to fit him into the plot again without trying to shoehorn it in there.

First, you could keep the original theme of the character. ARIA could have very well summoned this demon at some point before or after releasing Gargos as a means of defeating him and saving humanity, fighting fire with fire. This would also be a throwback to the fact that Eyedol and Gargos were rivals.

Second, you could flip that last one on its head and make Eyedol one of Gargos’ lieutenants. I’m sure there will be more than one beast coming through that portal, Eyedol could easily be one of them. There could even be some awesome betrayal potential there by making him a Starscream character who’s not really a big fan of his lord and at some point attempts to overthrow him.

Those are just two ideas off the top of my head, I’m sure with the staff and resources available he could be fit into the story. I know I post a lot about Eyedol but I love him and I don’t think he should be as difficult to worth with as we’ve been led to believe, so here’s a little help.

This Eyedol’s look is very amazing than original! 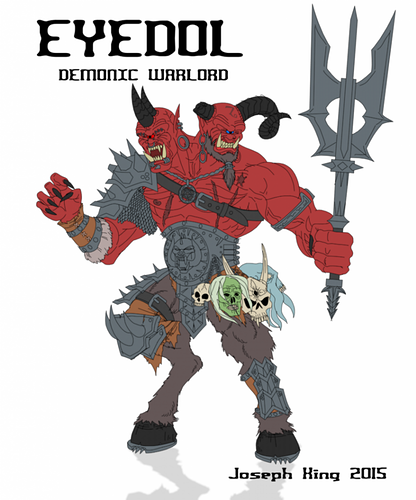 Goodness, that is a lot of pictures.

Do we really need another Eyedol thread? We’re not accomplishing anything, it’s just the same few people agreeing with each other back and forth that they want Eyedol back.

Do we really need another Eyedol thread?

Yes, we need another Eyedol thread. This thread for Eyedol’s new design, moves and etc.

I’m sorry, I thought this was the feedback and suggestion forum. You didn’t see anyone trying to squash the masses of Kim-Wu threads before she was announced. If you ask me, yeah we need all the constructive threads we can get.

Wow, I would not go that far…even 'cause Glacius (KI3) is the best character of all time

Anyway, I don’t see all these difficulties…I mean, Eyedol has satyr legs, so? It’s one of his characteristics and should be kept, imho.
And btw, the Harryhausen heritage is a plus but I don’t think Isgren said that in order to denigrate.

I agree! this is my favorite! This could work!!! I decided I would redo the Eyedol. The main idea of being a Hindu warlord still applies. The gameplay would be something like the current Riptor. A button would be the use of brute force, the stron...

I always love those designs but I’m not a fan of the split-head.

OP forgot my idea of a Fallout style Eyedol

[image] Simple, and to the point. Supermutant from the wastelands with two heads. Story: Ultratech nuclear experiments laid waste to the Mojave desert. Thousands of barrels of toxic and radioactive waste poisoned the land and water. Eyedol, a homeless wanderer became poisoned and horribly mutated but survived. Ultratech noticed his unnatural resistance and started experimenting with him, turning him into the cybernetic radioactive giant he is today. 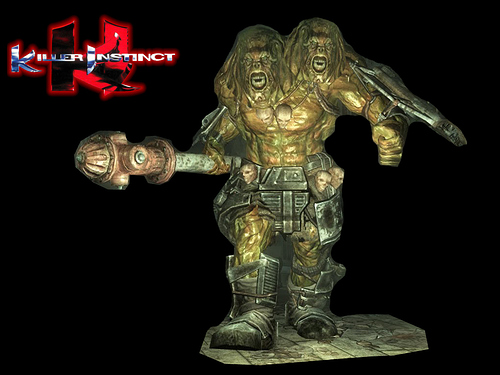 Really happy to some Eyedol fans collaborate. I agree they should keep the 2 heads of Eyedol as that’s his main trait, if they must take away the satyr legs then go ahead but I kinda liked that look as it made Eyedol more than just a slow brute. And @Zeybuccaneer I personally love your design of Eyedol. I would like to see a combination of the 2 designs taking the best elements of both such as the 2 heads and the hulk like body of the first design but that’s just me.

In my view, the weapon needs to change, to move away from Aganos.

The flail would be perfect, would completely change the movements and the way to fight

2 heads ok, I think valid to maintain identity
A flail as weapon would be perfect
Keep Cyclops … it bothers me a lot. Ciclops have silly face, are naturally donkeys, and leave the design directly connected with fools. I love the idea of three eyes per head. It is wisdom, not stupidity. And it makes much more interesting design

Goat legs … are not trademarks of character and I think are unnecessary. I remember the movement of returning life. He shaves his hooves on the ground, like a bull and regenerates life. BUT even then it is not something that will make a difference in design 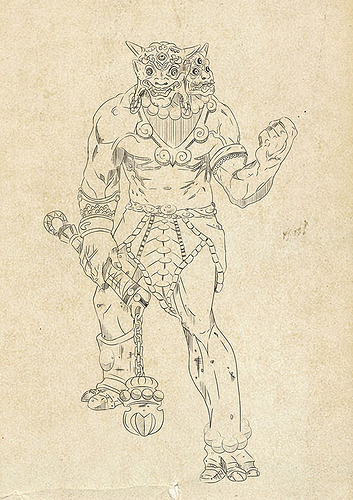