I highly doubt they would spend any development time to redo a small detail like that, I mean they refuse to revisit the season one retro costumes what makes you think they’d change this?

You’re absolutely right, but if anyone at IG is reading this, I really hope that they can do this for Orchid. I don’t know what happened between the time she was announced and the time she was released, but it’d be really nice if they could fix her face.

As for the season one retros, yeah… I’ll keep dreaming that dream as well.

Yeah, sorry to sound blunt but honestly I’ve accepted that their eyes are looking forward not back. If they’re going to spend time and money working on the game it has to be for things that will bring in revenue, not improve things that have already been sold. Especially things that are now two seasons old, I’m afraid the chances of seeing season one content updated are dwindling with each day that passes.

Adam said Orchid and Sadira’s rigs were missing entire sections of their ribcages, and that for season 3 they both would share the new Maya’s female rig. If they are going to redo Orchid’s frame to de-sexualize her torso, I don’t see why they won’t tackle on her face too.

Her face seems more like a design decision, not sure it’s a “problem” that needs to be fixed like a rigging error. Also, how exactly is her chest being overly sexualized?

Also, how exactly is her chest being overly sexualized?

Maybe the waist-to-hip ratio looks disproportionated in their eyes. Maya has a new female rig and they said Orchid and Sadira would adopt this new rig in the future.

Coming from an Orchid main I dont think that changing Orchid or Sadira’s body is something worth doing. Most people want the hair in general, from season 1 a bit more detailed. That’s all, no need to de-sexualize female characters. Women in general are beautiful and need to stay that way. It’s not like Sadira/ Orchid are showing too much skin. They’ve opted to leave Orchids retro KI2 outfit out, so why mess with her more? 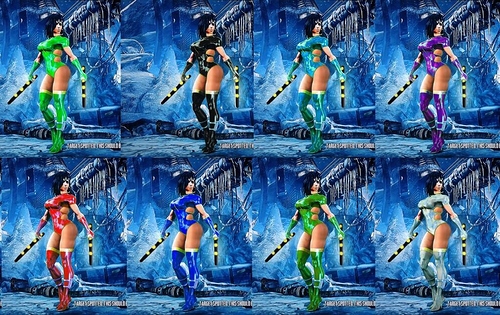 All of the hair/fur in game needs to be updated, it looks like slabs of dried beef jerky.

From Adam Isgreen, in the old forums.

Was this something recently announced or from a while back?

Was this something recently announced or from a while back?

a couple months ago

Maya has a new female rig and they said Orchid and Sadira would adopt this new rig in the future.

I don’t think he confirmed that they actually would. I remember the instance you’re talking about but I think he just said he would like to, or something to that effect. It would be a pretty large amount of work to do so, so it probably won’t be till after they stop regularly releasing characters if at all. It is an idea I support though.

Excuse my ignorance, but how would giving Maya’s rig to Orchid and Sadira “de-sexualize” them? I wasn’t aware that their current rigs sexualized them in a way that Maya’s rig doesn’t. Can someone explain?

Excuse my ignorance, but how would giving Maya’s rig to Orchid and Sadira “de-sexualize” them?

“de-sexualize” is a word I used, not Adam. Adam simply said Orchid was “missing entire sections of her ribcage”.

This means Orchid’s proportions are not realistic. Waist to hip ratio is probably too cartoony with the old rig, so they may want to give her more human-like proportions (broader waist, longer torso, bigger head… I don’t know)

Well I hope that if they do work on orchid and Sadira that they don’t change them much or if they do at least touch up their hair.

Facebisquits! That face really is pretty! <3
The ingame face as of now is also nice.

The main difference I’m noticing is the lipstick and more eye shadow other than that the model is identical for the most part.