Why are People hating on Shadow Orchid!?

ok, This is just being bogus now, I mean really, First people don’t want Eyedol and then end up getting him, and now everyone are against Shadow Orchid? it’s like they want everything not to come, because think about his…WHAT if they plan to bring ultimates back thru shadow Orchid, you would be preventing the one thing that everyone wanted back for the longest time. Would you want that giving you guilt?

There are plenty of reasons why that have already been stated:

Plus, using Eyedol is NOT a good excuse because the devs had already planned for him and purposely kept it from us. Big difference from being voted.

Also, why would the devs ever want to hold off ultimates, a highly requested feature, for another shadow character?! (especially when Shago already does what you said anyway) There are many other ways they could implement ultimates without Shadow Orchid.

There are people who think that Shago is a highly unique and artful concept, and not just a marketing gimmick made to shift launch XBones, and that Shorchid somehow sullies that. Yeah, stupid, I know.

It’s because she’s not a Lovecraftian terror of the deep, unless she is, then it’s ok.

Because its a rehash of a clone, a repeated theme, more of the same, boring, bland, uninspired, unoriginal and unnecessary.

Then answer me this, what if it was a character similar to Orchid, but not her a all, then would you still say that? plus a Lovecraft character? the day that comes would also be the day my tessen wielding character becomes reality

It was an option on the poll, so not entirely out of the realm of possibility, it was also one of the more popular poll options, never say never.

I am not a fan of clone characters, palette swaps or “evil” versions of already established characters. Hence why I do not want a “Shadow Orchid”. It’s unoriginal, it’s uncreative, it’s uninspired and it is not unique.

I prefer originality and uniquity. I prefer NEW characters over “remixed” characters. Copy/pasting a character’s design and moves into a slightly different model and plaster it with a really stupid name is just not original or unique.

I don’t like Shadow Jago because he is a version of an existing character.

I like Omen and Kilgore. They are independent of their original gameplay source.

I don’t want Shadow Orchid in a similar way to Shago.

I would accept shadow Orchid if she is NOT Orchid.

Make Shadow Orchid the corrupted firecat, without Orchid’s appearance. Borrow some normals and specials, but make this character INDEPENDENT from Orchid

Copy paste from other thread:

The Firecat comes to life as the “Shadow Firecat”.

Let’s call this shadow firecat “Murkat”. It’s a terrible name(Murk+ Cat), but my mind came with both this and Billy. So let’s stick to Murkat as placeholder

Gargos tries to use Omen to possess Orchid in a similar way to Jago and Shadow Jago… but Orchid, aware about the Shadow Lord existence, manages to resist. Still, the stress of the situation affects Orchid, and during her fight against the Herald, she uses her firecat powers to overpower Omen. The result was unexpected: Although she retains her firecat(maybe in a different way, leading to balance changes for Orchid!), this situation creates a new entity: the shadow firecat, know as Murkat.

Appearance:
Murkat has the appearance of black panther, with shadow energy pouring from it’s body 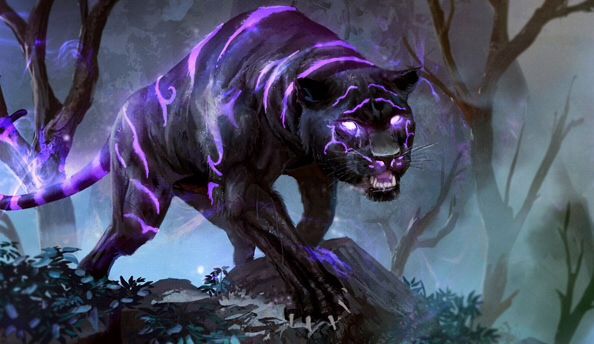 (Yes, this is a tiger, but you get the idea). It’s as long as Riptor, with similar size overall. Could use some extra features(wings, horns, armor). I feel that a Pink color to have the pink panter it’s mandatory XD Another color could be the yellow one of Orchid’s firecat. Omen’s mask could be an accesorie.
Optionally, it could be humanoid shaped:

In this case, it could be similar to Orchid’s appearance

Gameplay:
Being the first character which stands over 4 legs could sound difficult to do, but may be not as hard as it looks.
Murkat is similar to Noob Saibot: Uses projectiles which are basically a duplicate of itself. Has decent walkspeed, moderate combo damage, and it’s forward jump is quite low, but covers a lot horizontal space.

Run: Similar to TJ or Wulf, Murkat has a run with different follow ups. It has an overhead, a low and a mid(all combo starters, all negative, except the mid, which is +) with kicks, and duplicates with punches. If you press punch while running, Murkat stops and a dark firecat continues his previous path. All of them are similar to to the kicks version, so the duplicate can perform a low, an overhead, and a mid. After a brief recovery, Murkat can move freely again, so he can go for a duplicate which hits low, and then go by himself with an overhead. He runs faster than the duplicates, so he can surpass them from fullscreen, leading to ambigous mixups, or making his low/overhead attacks safe with the mid firecat. Shadow version is projectile invulnerable, and like Cinder, depending of the combination(LP+HP, LP+MP…), gives you hybrids: both you running and the firecat running alongside you, and depending the combination, the firecat uses a different attack, so you can do the opposite(or not!)

DP: Murkat leaps into a dp similar to Orchid’s shadow dp. Light is invulnerable, but deals minor damage. Medium is a duplicate which emmerges from Murkat, and leads to a juggle, has upper body invulnerability. Heavy has no invulnerability, and is Murkat jumping while a duplicate stays in the ground, hitting the opponent in the air with his real body, and then the ground duplicate recaptures it for a combo. Murkat is airborne, so it must use an air attack as manual. Deals decent damage by itself.

Rekka: Similar to Orchid, Murkat uses his claws or his bites to preassure with a rekka which can lead to high/low mixups. L is low, M is overhead, H is a firecat with similar applications than Orchid H rekka, but puts some distance between Murkat and the opponent(he jumps back), and its +, so you can go for another mixup with run(rekka it’s out of range)

Instinct: Everything Murkat does, it comes with an second firecat which does the same. Works as Yun’s Genei Jin. Every normal and special is affected by this, so sometimes she is increadibly hard to shadow counter. Deals more damage during combo, and inflicts chip damage with the extra attacks on block

I’m fine with semi-clones just to add up to the roster, but when there are ideas like shark monsters, mages, wendigos, etc, I think it’s lame that we get rehashes. I also feel like these next three characters are like a pre-season until we get S4, so I understand why the characters are revamps rather than fully independent. As for Shadow Orchid, I think the hate is because taking Orchid and giving her a demonic costume with blue skin, and calling it a new character is way less interesting than someone like Kilgore who looks like more than just a costume. It’s not just Shadow Orchid herself, it’s because the other remixes are more unique ideas.

IMO it makes a staple character of the series relevant again. Orchid is overshadowed by other characters at the moment (no pun intended) she doesn’t even have a movie in shadow lords. I’m actually excited to see what they would do design/move set wise with a shadow orchid.

Also because she is the only way this game is getting tessen fans, and this game needs Kitana like it needs every other uninspired staple skankoid NRS could muster, and Ryu while we’re at it - which is to say it doesn’t.

I don’t think Shorchid coming will dictate Ultimates or not. I think Ultimates should come on on their own case.

I’d like to see them hopefully, within the next few months, but my hopes are not going to go up on this instance to be realistic.

On the other note I’m indifferent to the idea of Shorchid.

Do we really need another orchid?

Because simply people like to have an imagined sense of choice and control over something that is inevitable.

I dont want shadow orchid, this isn’t street fightere where you have, ken , ryu, dan, akuma, sakura, evil ryu who are all very similar, sakura being slightly different but not much imo. and now we have killgore coming… so KI3 already will have 4 similar characters we dont need 6. what attracts me to KI even from the snes was the entirely varied roster

No need to spill your shadowy salt, friend.

A lot of “forum thread development” your imaginary devs scoff at has actually made it into the game, because sometimes people actually know what they’re talking about.

On the other hand, I bet the devs do have a good chuckle at a ton of the nonsense that pops up on the forums, and Twitter, and Facebook, and Reddit, and so on and so forth.

Shadow Orchid always sounded to me like a throw-away idea. I remember in some past interview, she was mentioned…something like “We could do a Shadow Orchid if fans wanted that.” The usage always seemed interchangeable to me - First Shadow Orchid, then Shadow Cinder and Shadow Thunder…it’s just not a path I want to go down further. I don’t need edgy versions of already existing characters.

Even if there was a specific gameplay style dedicated to a Shadow Orchid, I’d rather see it used on a new character for the lore; even if the character uses a frame and some normals borrowed or similar to Orchid’s. Likewise, I’m not even a Perfect Dark fan, but I would much rather see Joanna Dark if for the aesthetic reasons alone.