Who is you favorite remix character and why?

I like all of them, but personally Kilgore is my favorite. I have always liked robots/cyborgs, so naturally I was very glad to see another one added to the game.

When I first saw Kilgore, I was hyper exited. A cyborg with dual flaming machine gun arms? How totality radical is that? At the time though, all I saw was that blurry image that was accidentally shown to the public, so my mind raced with what this new character could be about. I was hoping that Kilgore would talk, perhaps in a robotic text to speech voice. But he just makes robot noises like Fulgore. 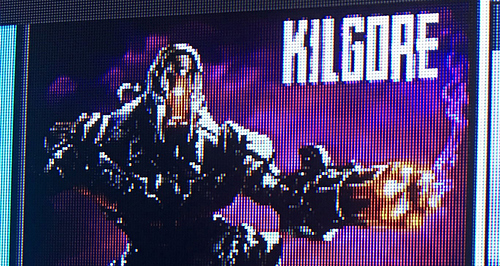 When he finally came out, he was even better than I thought. I love his overheat mechanic. When Kilgore overheats, his machine guns effectively become flamethrowers. That is so flippin’ cool. And his whole playstyle is rather fun to me.

But, my main complaint with Kilgore is that he looks too similar to Fulgore. (Even though I love Fulgore’s design.) That is remedied with his accessory set. It makes him barley resemble Fulgore. I personally think that it should have been Kilgore’s default look, but since you can pick either, I guess it does not matter very much. Also I like how he contrasts with Fulgore, in their music, taunts, and gameplay style.

Kilgore. He feels really different from Fulgore and he’s got so much personality. The Ultimate is the icing on the cake!
I really like all the remixes. They’re all fun to play and I love that they have their own unique soundtracks (apart from Shago and Omen sharing one, but I think that makes sense).

Shadow Jago is still the o.g… From a downloadable skin via the Xbox One code for day one players to becoming a real boy.

In the right hands, Shago is untouchable.

def Kilgore. the character manages to have so much personality despite being a robot and a “prototype” Fulgore. Kilgore to me feels like Sean from SF3; you could say “Ryu palette swap” but you’d be being very reductive. there’s a LOT going on with the character that makes them noticably different.

WOW I think this is the first time I have ever been in the least- popular opinion for… ANYTHING.

I picked ShinHisako because of the story/character progression it implies. It’s nice to see a character go from a tortuace existence into total peace and fulfillment. I’m happy for her!

I’m gonna put in a proxy vote for Shinsako for my girlfriend.
In her words, “More Hisako, More Better”

I picked Shago. Love his move list, his look, and the lore surrounding him.

I think that Kilgore would probably be up there as well, given his move list and the sheer amount of character he has.

I had to pick Shago. It all comes down to the fun factor for me and Kilgore and Shinsako were just boring to me. Omen and Shago are fun characters but Shago just has a slight edge over Omen for me.

Damn no omen lovers? Well I think it’s no surprise that my favorite would be omen. I love his design, his demonic voice and that gameplay just make for a great combination. Ironically all the three of my mains are on this list lol.

I voted Omen (surprise!). I think he has the most unique and interesting design of all the remix characters. His air mobility and random fireballs and shadow form and orda stuff are just really, really cool to me.

Aesthetically, the other remixes are obvious remixes on their particular character; Omen is the only one who you can look at and go “huh - I wonder who he’s based on?” I’m one of the people who’s always loved the way the character looks, and I like how even his shared animation moves are really different in practice.

Kilgore, for the same reasons.

Same here, her accessories are so bad. I wouldn’t mind them as much if she had other ones too.

Shin Hisako’s the one I enjoy playing the most. Plus she has a real sword and not that saw Shadow Jago has so that’s a plus.

And as much as I love all the characters, I’d say Shago of the four available. I love the gameplay that Omen, Kilgore and Shin provide but something about the teleporting, air-balling, buzzsawing salt shaker just keeps me coming back for more.