The hard question of missing stages

KI is very overpopulated, now too many characters without their stage, and this makes losing their identity.
I completely understand that the creation of new stage has huge cost, but I think one thing that should be done. here’s my idea:

In reality not everyone will have their stage unique
Mira, Eyedol, General Raam and Rash (and next character) require a unique stage.

Kilgore and Shin Hisako, require a modified stage, just like Shadow Tiger Lair.
Hisako stage and Fulgore stage with different colors, or a different day time or atmospheric climate.
example: Hisako Stage at sunset, with the sun’s rays passing through the trees. Fulgore stage experiencing another type of energy, blue or green… 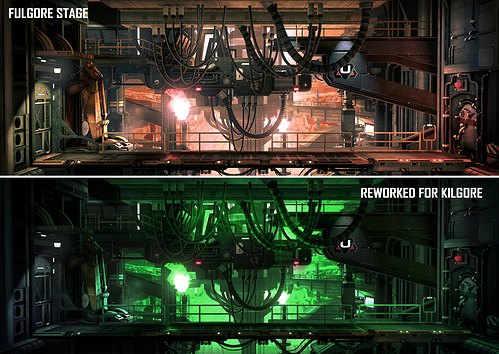 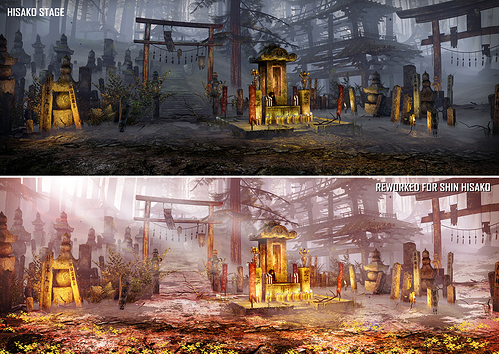 Finally, we have Omen and Shadow Jago. We know that originally Shadow Tiger Lair, was owned Shadow Jago, and later inherited by Omen. It would be nice to have a third variant of Tiger Lair, some destroyed, instead of the bell, a big black hole vortex, and a color more purple or red.

If we got a RAAM stage it’d have to either be the train sequence or the big city battle from the first Gears/Ultimate Edition.

personally I don’t think guests should have stages… this includes arbiter… but whatever.

@developers if the same amount of people who bought kilgore or shin hisako made a 20$ donation each, would that be enough for the five missing stages?

I don´t know why some people complain about that ammount of people (inclouding me xD) that ask for those stage to give their identity of those chars, and some people say “they need a big amount of money to invert on those new stage you´re asking for” and paying each season and those chars separately is not enough to ask them for those stages? come on!

that´s would be great!

Yeah, if they decide to do a 4th season, I would be ecstatic if they made a retro stage or two as part of the ultra pack. That would be amazing.

As for @Ravan86’s idea on Kilgore and Shin Hisako, I love those ideas! I just wonder how much it could cost them in terms of time and money. I vaguely recall Adam indicating that Shadow Tiger’s Lair was a bit of an undertaking, far beyond what most people seemed to think it was as the time.

I’d also LOVE to see fully realized, unique stages for Mira and Eyedol. I don’t quite mind the guests being homeless though. Nothing against those characters at all, and I know Arbiter got a stage, so theoretically they should too, but none of this seems overly practical at the moment, so if I’m cutting anything, it’d be guest stages.

I think MS / IG kind of underestimated how much people like stages. I don’t want to generalize, but it’s how long after the whole 3 stages thing was announced and people still bring it up; seeing this is a sort of unfinished aspect of the game?

Don’t get me wrong, I love Shadowlords, so for me, the trade off was well worth it. But if there’s ever anything that they could add beyond characters and outfits, I feel like stages, new or retro, is probably at or near the top of the list for a lot of people, and I really hope they take that to heart and find some way, any way, to make that work from a financial standpoint.

I know that there are people on the dev team that see stages as relatively superfluous (or completely superfluous), but a lot of people appreciate the art, the background action, and the added flavor that they give to the characters, especially the characters that you particularly like or enjoy using.

There’s value there beyond the utilitarian “is this something I can use” and I think it’s a lot more than some of the devs might believe it to be for many fans. But that’s just a guess on my part based on what I’ve seen on the forums.

That’s what I want the most.

The green lighting for kilgore would be cool and the one for shin hisako makes sense with her.

I have to believe that it would be easier to modify an existing stage than to create a whole new one. There are many games that do this.

Having said that, there is a cost/benefit equation and I have a feeling that despite the passionate and repeated sentiment of a very vocal minority, there’s just no way adding stages beyond the 20 we have is going to pay off for them.

Sorry, guys, but after all the hate the ultimates seem to be getting, I’m even less convinced the devs should make more stages just to try and please people.

But if they surprise me it’ll be pretty cool.

but after all the hate the ultimates seem to be getting

From my understanding the response to the Ultimates has been mostly positive…just the negative responses have been extremely vocal for some odd reason.

It’s not even the minority here. A majority of forums users and players would like additional stages added to the game. That was never the problem though, it’s not that they don’t want to, it’s the directors at MS who can only fund so much money and resources.

From my understanding the response to the Ultimates has been mostly positive…just the negative responses have been extremely vocal for some odd reason.

My point is that a lot of people just don’t know what they want.

I imagine people will get stages, be like “oh, that’s nice”, and continue to only play on two of them.

I’d rather them release colors/costumes that people will be more inclined to use and likely cost less (not sure, of course), or take another risk (SL). Or online training would always be nice.

I’m not going to split hairs about the definition of minority. I don’t think anyone would say “no” to more stages if there was no cost. I do think it’s a minority that feels more stages should come before more characters or other content. And there’s a big gray area depending on what you have to give up to get those stages.

I imagine people will get stages, be like “oh, that’s nice”, and continue to only play on two of them.

Not me, I’ll be rocking those bad boys regularly. But that’s just me.

Honestly I’ve been that way about a lot of the costumes and colors. I mean I’ve got everything I’ve been able to get my grubby little hands on, but I really haven’t used any of the new skins. maybe I will in the future, but whatever cosmetic additions they make, there are going to be people that use them and those that won’t. I know stages are a larger risk on that front, but it doesn’t mean that extra costumes will equate to money in the bank.

But yeah I agree…all that stuff would be nice if they add it. I personally would just like it to be where, budget permitting, we see a little of all of it.