I played around with Shadow Lords last night and fought a couple of Shadows during Shadow missions, and seeing the Shadow’s gamertag got me thinking; how long will it take for forum members to start facing off against each other’s Shadows during missions?

If you come across the Shadow of someone you recognize from the forums during a Shadow Lords mission, take a screenshot (Guide button twice -> Y on an Xbox One controller) and post it here so we can keep track of whose Shadows are the most invasive and disruptive!

Currently, I only have a 2 days old Eyedol shadow, but I’m going to create another one.

Not a Gargos or Aganos one, I will create a shadow for a character that I’m going to use a lot in shadow lords, since my mains doesn’t need to play shadow lords since I already have their mimic skins

I already faced @lewisthewizard’s Spinal in my first few fights. Didn’t take a screenshot, sorry. I do wonder how the Power Levels work with the Shadows AI.

I’ll be honest, I was focusing on leveling all of my characters up to 50 when Shadow Lab came out and I finished that right before Shadow Lords dropped, so I’ve been on that ever since. Think it might be time to finally start training up some Shadows! If you see Iago407, just know that the match will be very easy lol.

HINT: My shadows like long walks on the beach, medium auto doubles and being more or less mediocre all around.

Dang…you beat me to it. All things considered though it might be simpler to just handle this like the GGs thread (I play on PC mostly anymore, so the pic-grabbing thing isn’t as intuitive…unless I’m mistaken).

Anyway, So far I’ve fought @Fwufikins , @Fnrslvr , & @DescartesTruth 's shadows, though I can only recall who Descartes’s shadow was…it was Aganos.

Shameless plug: Get involved with the Shadow Lab friends thread. Maybe we can up the quality of our the shadows out there!

Hello! With the most recent update (3.5), I think it is time to revive this thread and begin a new/old ring of players in an effort unlock the new Shadow Skins. From my limited playtime with the new update, I can already see that unlocking the new skins will be a slog (75,000 pts for a Jago Shadow skin?), but I also noticed that you can rack up a seemingly decent amount of 'Shadow Points' through the bounty system (125 pts with each bounty win). I'm not sure how many people are still active… 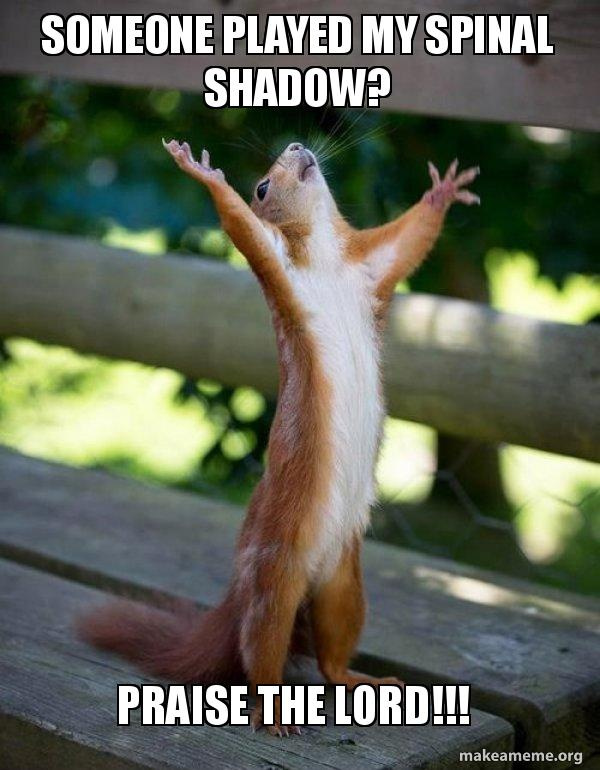 I like this idea, together we can farm those nasty Shadow Points for the Shadow skins, by the way, you might intercept in Shadow Lords either my “Shadow” Rash or “Shadow” Shadow Jago, you can also take a look on your Shadows reports when visiting the Shadow Lab and you can see how your Shadows are doing in both the lab and Shadow Lords as well.

Man, I wish I could post more here. Shadow Lords has been crashing for me… I’ll try again, but for now I’m relegated to Shadow Labs.

@WrathOfFulgore Only Shadow I maintain is Sabrewulf. I made a few attempts at others but deleted them because I was unhappy with the results. Though as @UncappedWheel82 will point out, my shadow is a lot less respectful than I am.

I’ve tried to give them a variety of match outcomes as I’ve mess with them over the year or so I’ve used it. Sometimes he’ll be a good boy and win/lose gracefully. Other times he’ll bark and howl and hump your leg before, during, and after a triple Ultra.

I ran across him in Shadow Survival, and he swept me like 6 times in a row. He swept me to win the first round and “humped my leg” repeatedly while I was laid out.

I got him though, but he was tough.

HE DID?!
Oh my goodness,he really is learning!
#GOOD BOY, SHADOW! TIME FOR BELLY RUBS!

So I got Shadow Lords to work (on Godlike

) and I ran into @MasterZenek 's Wulf Shadow…who happened to be armored.
That was an experience.

Oh, goodness- I was just about to wrap things up and go to bed, but now I HAVE to watch the replay of that one!

I just hope that my Sabrewulf Shadow put on a good show!

My shadow has beat two people, I feel bad for them. I’m a scrub and my shadow is a scrub of a scrub.

I fought your shadows, and since they are worth of lots of points, I’m going to make it daily XD

Let’s keep this Shadow Lab stuff alive, so we can create a lot of revenge chances to get more Shadow Points, it may start with a low reward but is better than nothing, plus, we can challenge our shadows to try to get more points, and do at least 3 Shadow fights missions in Shadow Lords for a little bit more daily points.

@Rolly2891’s Shadow Jago appeared for me near the end of a challenging level Shadow Lords playthrough yesterday. I forgot to screenshot it, but it had some high-level buffs like Power V, Fury II, and either Vampirism or Concentration, one of the 2, I forget which one.

Yeah, in Shadow Lords the Shadows get the mimics buffs in order to “have balance” against a player using Guardians and items, stay on guard all the times and don’t show mercy against the Shadows (by the way, if your Shadow loses in Shadow Lords, they still get a reward for doing the fight as a renegade Shadow).

I believe you still bopped him though.