Thanks for 2 Wonderful Years

November 22nd 2013 - 2 years ago today the Xbox One launched, and with it came the revamped version of Killer Instinct we all know and love today. That night back in 2013 was a fun night for fans and developers alike, as hundreds of people poured in to the Microsoft Store here in Seattle, WA, to get their hands on the Xbox One and celebrate the launch of a new generation of gaming.

This is either a wonderful troll, @MrHero0fTime, or a silly mistake. Let me know which.

Oh and the thread you want to post in is here: KI 2 Year Anniversary Giveaway

Well, that first comment was a big mistake screenshot wise, anyways this is the correct screenshot and now… I forgot what I wrote originally. Anyways congrats! This game is literally the not reason why I got myself an Xbox One and I still stand by my decision. Thanks guys! 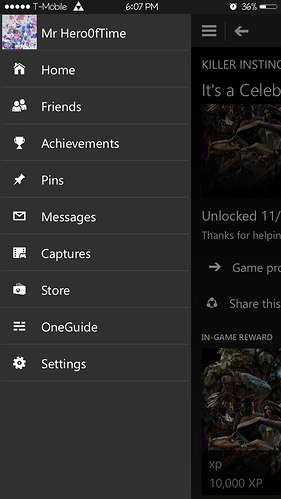 its been a blast, how bout another 2 years?

Happy Birthday, KI 2013. ;w; Thanks for giving me such a wonderful cast of characters, including one of my favorite characters to come out of media in… well, possibly ever! Here’s to hoping the future of the series remains as bright as it looks now. Now if you’ll excuse me, I have a match to go complete… :]

(Also is that FilthieRich in the top photo? Aaaa the memories. ;_; I hope to see him back on KI some time soon, always liked listening to his commentary/watching his streams.)

Also is that FilthieRich in the top photo?

Yes, it indeed is!

First off, a quick rant of sorts, which I’ve also posted on the actual giveaway thread as well.

What should/can those of us who can’t actually obtain the necessary screenshot/photo do? It seems unfair to limit it to only those who can see enough to complete the task especially as I and others like me will want to be part of the celebrations and be in with a chance of winning the merchandise. Moreover, the achievement popped the other day for me, though whether that was an Xbox specific one or for KI remains to be seen. I mean I could get sighted help, but it’s unlikely to be within the time frame and even then with the new dashboard it’d most likely be a tricky task to get the GT and challenge in the same shot, then figure out how to upload it etc…

OK, argument about accessibility over.

Let’s hope KI continues to grow, evolve and bring in new players for at the very least another 2 years, if not longer.

Well done to all the individuals who worked on the game.

Happy Birthday to one of my favorite games of all time.

However, and I know I’m being a real pessimist here, but we still haven’t gotten a release date or window. I’m sure you guys have your reasons, but…just keep up the good work and notify us asap when that patch/stream/trailer/character is coming.

Thank you all for your hard work.

I’ve been following the new KI since it got announced at E3, and I distinctly remember asking for it constantly during the Microsoft conference…and then it happened, and I sort of freaked out.

At first, I was admittedly kind of unsure. KI was really the only thing I wanted on the whole console, and my friends (which eventually turned into mine, as well) constant ridicule sort of made me think I’ll never get it.

But Max’s constant support and TJ Combo’s return made me cave around Christmas last year, where I got S1 Combo Breaker and S2’s soon after, which is right around where Riptor came out and Omen got teased.

Many a day was spent awaiting trailers, getting bodied, and frothing at the mouth for the Season 2 soundtrack. All eventually arrived (and in the case of bodying, got slightly less bad), and here I sit desperately awaiting Season 3 and Shago.

It’s been a killer ride, and I hope it never ends.

Happy Birthday to KI <3. Love that at least that we are getting some sort of news. Looking forward to these next couple of month as we get closer to season 3.

These have been an awesome two years! Let keep it for future ones! Happy Birthday KI!!!

Happy B-Day KI!! It’s been an amazing two years. From the initial announcement to season one’s release, that brief limbo period when Amazon bought DH, up through IG’s season two and everything ya’ll have done for the fans; communicating with us, asking for our feedback, and putting out a game that we thoroughly enjoy… Thank you all so much, MS & IG for your hard work.

We all might complain a little and debate all things big and small, but please know that you’re appreciated. It’s been a great ride so far, and I’m very psyched to see what’s next!

As for Shago, in really looking forward to seeing the real boy version soon. Hopefully he’s ready in early December, but even if it’s late in the month, it’s still not that far off.

So Keits is talking about UI changes tomorrow? Did I read that right? Hope we’ll see some pictures.

Guessing we’re getting a new select screen, which I look forward to. Wonder if the rest of the UI will get a “season 3 treatment” as well and what that might contain.

I’m still really hoping for an overhaul of the Vs / Fight On screen and an end to the reused appearance animation from the select screen followed by characters freezing for ten seconds (one usually with their eyes closed) and a return of a more stylized version of the original arcade KI’s darker, FMV character animations on that screen.

Guessing that won’t happen, but still hoping none the less! Either way, glad to see KI at two years old! Season 3 can’t get here soon enough.