So Rash's retro costume is just a retexture with less detail?

That’s gotta be the least impressive retro in the entire game if that is indeed true. Especially since the modern texture was already in the game and playable under specific circumstances. 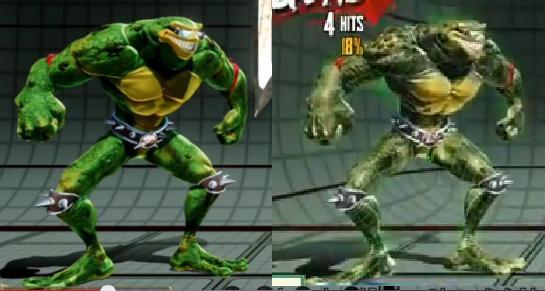 To be fair, Rash had slim to no changes of his appearance in any of the Battletoad games. You can understand that IG doesn’t want his retro to be entirely different or off putting to the character. In short, not much they’ve could have done about it.

I thought his default was his retro, so what does his retro in this game look like? Anyone have a screen shot?

Well I had actually hoped that they would make his modern costume a bit different from the retro we had seen in the beta. Maybe make him a little less goofy looking and keep the retro as a cartoon version. I hope nobody actually pays for the retro if the “costume” is just a glorified texture pack.

The retro is what we got in the beta, the default costume is literally the exact same thing but with the darker texture they showed off at the KI Cup.

Maybe they just don’t want to show off his actual modern design until we are closer to Rash’s release.

The standard looks realistic and gritty; the retro is brighter and far more cartoony in nature. Otherwise, they’re the same - whether that can be said for his accessories (which have yet to be revealed) is an entirely different matter, and according to the devs, we’re going to love what they’re going to have for the toadster.

I’m sure we will love the accessories but its still a little underwhelming that the default and retro are the exact same model just with slightly different textures when the rest of the cast actually got model updates to make them look more interesting. Its especially bad because they expect people to pay for it, retro rash is basically a color pack and a couple of accessory sets, not a new costume.

Sadly I can’t do it, since I’m on my XB1, so someone else will have to, but someone needs to put up a sid-by-side screenshot comparison so you can see the difference - it’s actually quite big overall. Maybe you could do a quick Bing or Google search?

I was actually doing just that before you were messaging me, they’re in the OP.

In other thread about this, Adam said that while the Base models may be similar the accessories for both is what will make them different

So retro rash is just an accessory/color bundle basically.

They Look the same

why does Rash Normal and Retro Look Exactly the same? With all the Characters there Normals and Retro look completely different you can tell that there different costume internally but when you look at Rash it just look like a Re-Texture instead of a...

Oh damn, I don’t know how I missed that thread. Thanks for linking.

Oh lol I thought that had just darkened his skin. I am surprised that’s his retro, it doesn’t look much different.

Why don’t they make it like a pixel 2d version, that would be sick

Mmmmmmmmmmmmmmmmmmeh Lol but seriously I don’t want get into an argument because I know I’ll lose then I have make an idea out of my a** to make a justification why these ideas wouldn’t work. Instead I don’t want any involvement in this discussion any further. I’ve already put myself into a corner so I don’t want to make it any worse.

Kim Wu’s retro will look like garbage, given that is the quality of her original design.