We don’t even have testers yet lol

I would so love to test, I’m thinking of becoming a regular streamer, I introduce the game to almost all I come across in person, but its my schedule that creates hesitation regarding streaming

I would love to test this, but I didn’t apply for a code because my travel schedule wouldn’t allow me to do it justice. Also, I think there’s a 50/50 chance I will play this a few times and discover it’s not really my thing. Not a criticism, but I usually prefer playing human opponents. Anyway, I figured why try to elbow my way in and then risk taking a code that someone else could make better use of?

On the subject of whether it s a beta, I would say definitely not, for the reason cited by @xOGTxBONESx mentioned. But I also wouldn’t say it was “final” since there will likely be many future patches and updates (if not a day 1 patch). So I think “early access” is the right phrase but I do think they are very interested in feedback. They have out a lot into making this and I get the impression they want it to be very popular.

I just hope that when early access is about to go out, that they tell us to be on the look out for it. I would hate for that code to go into my junk mail and I miss it because I didn’t know it actually showed up. Though I’ve been checking pretty much daily for it. Just ready to get my hands on it. It seems like a really cool change of pace, and not to mention want to get that Gargos stage unlocked.

When shadow lords gets releases it wil replace shadow lab right? What will happen with those achievements ? Are theyre gonna be impossible to achieve after the update? Grtz

Shadow Lab is a completely different feature, its not going anywhere, nor are the achievements. Shadow Lab has just been moved from the main menu to the single player menu, don’t worry all of your shadow data is safe and sound.

The devs explained this in the last stream they did for Shadow Lords, if you have any more questions check my list to see if they were answered and if not I’m sure we can give you a hand figuring them out.

No, I don't have anything better to do. 😛 All points taken from this stream: https://beam.pro/MicrosoftStudios Shadow Lords: Shadow Lords replaces Shadow Lab on main menu. Early access to selected users estimated to start next week. Rukizell...

Well not to spoil anything for you, but nearing the end of the mode it will definitely blow you away or rather a certain individual will 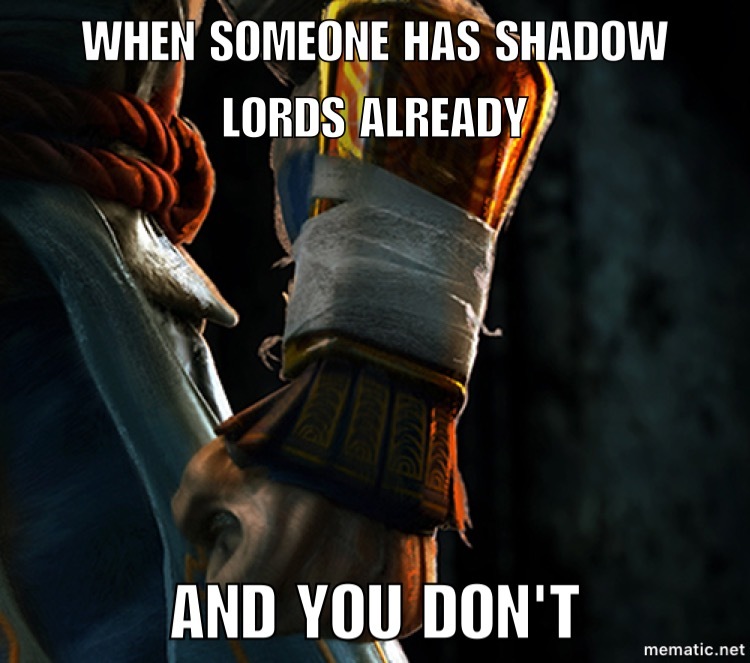 Wasnt Jesus cruxified ? and raised from death ? Its in the history books. Interestingly enough ,Jesus said Happy are those who believe without seeing.

WHY DOES MY FRIEND HAVE SHADOW LORDS AND I DON’T, his account is litteraly a silver league with 1 day of play. Im a killer league with 14 days. I’m so angry

Something weird is happening with Shadow Lords right now. The mode is randomly popping up on people’s main menus and the EVO goers aren’t receiving codes yet.

Im sure it isnt intentional…and there is no one more deserving than anyone else. Its not a competition. And people saying EVO are supposed to get the codes first blah blah blah… that’s ridiculous… MS will give the codes to whom they see fit , when and how they want to.

Everyone needs to relax… They dont have to give anyone a code. We can wait until the official release for all they care.

Everyone need s be patient and humble about it.

Yeah, looks like Twitch streams are lighting up with people playing. Out of desperation, I’m gonna see if I’ve gotten anything by resetting my Xbox and rechecking my email…

Tried that already. No luck.

Yeah, nothing on my end either.

That stinks, but that’s just how the luck of the draw goes. They could possibly release some more codes this week or next as time goes on, but I’m not gonna hold my breath.

At the very least, I hope the people who have it give IG some good feedback!

Can confirm, don’t have it.

If possible, can the members who did receive it clarify if there is a process or if it just populated on it’s own? That way we know what to keep an eye out for. Thank you in advance.

I’ve seen Twitch streams and people in the Ultimate Fans Facebook group start showing off stuff. It would appear the trickle has begun, but it’s going to take a while us, especially for non-EVO folks.

I wonder if people can get banned for this??