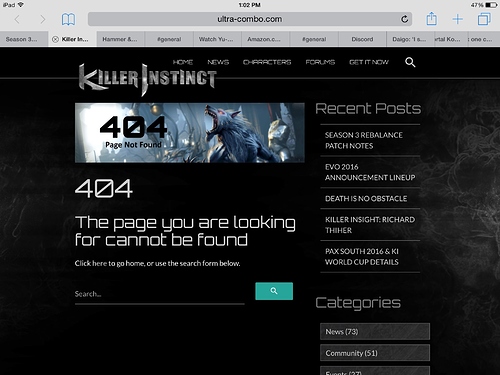 Fixed every complaint I had with the game and buffed my main??

Did they mention in the stream if omen and shago would get more accessories or if omen gets to keep his wings out permanently?

Ouch. Those Aria assists take huge damage. The nerf will make her unsuitable for a casual scrub like me.

How I feel about my baby, Spinal right now…

So Sabrewulf is slower on the attack, is weaker overall, and his Instinct is neutered too?

This makes the Season 2 round of nerfs look tame in comparison!

Diving Slash is better than nothing, but those nerfs hurt far more than the buffs… Maybe Season 3 will make me a happy panda by delivering a new beastly fighter to make up for the rabid nerfs?

At least Riptor’s been helped overall, and her new Flame Mortar looks incredibly useful! Still can’t wait for Season 3, and I still love you, KI Crew!

-Sabrewulf animation on Diving Slash looks a bit plain. Would be kinda cool if they maybe had him spiraling down toward his opponent or something like that?

-Sabrewulf’s instinct. No damage bonus is fine, but nothing to balance that loss out? So now it’s just feral cancel and chip damage? Sorry to be so blunt, but that’s incredibly dull and I hope this gets reworked.

-Spinal curses lasting 30 seconds seems like an awful lot. I know you’re meant to get in and hit him and remove them, but still. Guess I’ll have to see how this works in practice.

-Spinal’s projectiles bouncing all over the place in instinct seems a bit OP, but I’ll have to see it in practice, I guess.

-Still not loving TJ’s autobarrage, wish that had been changed a bit. Target combos are nice though.

-Changes in Omen still don’t really make me want to play him, but I suppose they’re good for Omen fans.

-No longer being able to cancel in to instinct off of a combo breaker!

-The flip out mechanic and the many juggling opportunities it presents.

-Jago’s big endokukens and fake endokukens. Love them both. Great stuff there.

-Sabrewulf getting a new move, even if the look is a bit meh.

-Glacius… Just wow. Some major improvements here. His instinct is 20 times better, love holding muliple hails and keeping them offscreen. The puddle punch and cross up puddle punch stuff… Just a fantastic job overall with him.

-Thunder got some solid damage nerfs, which I kinda thought he needed with some balanced out moves, which he got.

-Sadira… My favorite buffs aside from Glacius. Awesome job! Love the new ender, Love the new down+HK. Kinda curious how people will use that move.

-Buster slide is an awesome addition to her move list.

-Like that Fulgore got his full screen eye laser and lost the upward version entirely.

-Love that Kan Ra seems more fair overall. No more attacking in air after realeasing a swarm, greatly reduced hit box and damage on swarm, greater damage on sacrifice… They did what they needed to do without destroying who he is.

-Also love the changes to shadow spike. Much better. Always hated how that move acted in the corner.

-Riptor got some great changes / additions. The flame mortar is fantastic. Increased damage with primal linkers a plus.

-Like Aganos’ improved Chunk/peace maker management and overall increased speed of some stuff.

-Love how Hisako can descent cancel… Combos off of that looked crazy.

-Air shadow on ryo zan seems like a great addition to her arsenal.

-Really like Cinder’s angled inferno as well as being able to keep them burning longer.

-Throw cancel to level one burnout is also a nice move.

On the whole, I’m REALLY happy with the season 3 rebalance.

I loved that some of the characters with smaller move lists got more to do, I like that they made a lot of general damage adjustments and added more opportunities for juggling.

I know that some people on the stream kept saying “Marvel” at that, but to me, KI is about combos, so whether your’e doing strings on the ground, going to air, back to ground, etc… It all makes the game a lot more fun for me, so I thought that these changes were great, and the crowd seemed largely positive as well.

Very cool stuff guys! Hope Sabrewulf gets a few adjustments (namely to the appearance of diving slash and perhaps some new toys for his instinct) prior to season 3’s release, but that’s really my only major gripe.

I’m more curious to see how Spinal works now. Definitely going to hold off judgment. Still not a huge fan of Maya or Omen, but that’s honestly okay. I don’t have to love every character and if there are only two that I’m not all that interested on a full roster, I’d say that’s an amazing roster and it is, in all honesty.

All the Saberwullf nerfs made me sad. Omen buffs made me happy.

Everything else balance related was awesome, but didn’t made me that emotionally driven ehehe

Kim Wu is a beast, the fight design of hers is top, but her face.

All the Saberwullf nerfs made me sad.

Yeah I didn’t mind some of the damage nerfs and hitbox stuff, but man… Removing the added damage on his instinct entirely without replacing it with anything else? That’s by far and away my biggest issue with this rebalance.

Granted, I loved the rebalance changes overall. A LOT more likes than dislikes. But seriously… How are you going to take away a major part of his instinct and not change it to something else instead?

As for Kim Wu, her face is okay. Not great. Could use some more texturing. I dunno, maybe she’s still got some more work to be done in that department? But still… Not bad (to me). The rest of her though… Near perfect! Her look, her moves… I still don’t overly see why her dragons are all that special, but I guess in concert with all the other stuff she can do, they’re a good thing to have, I suppose? I’ll have to see more. Either way… REALLY happy with how she turned out!

Could use some more texturing. I dunno, maybe she’s still got some more work to be done in that department?

I think she is very, very unpolished.
Love most of her moves, except air dashes.
Love the realistic looking Kim, though, despite the face… So I have mixed feelings. And she used to be one of my mains, sniff

What buffs? A command string into juggle potential on a character with no juggle potential? His short zoning potential against the fast rushdown characters who avoid all of his normal zoning with ease being gone too? Ground bounce on his overhead? Where is that ever gonna be relevant? On his laser ender? I’ll ask again, when is that ever gonna be relevant? Unless he loses his hard knockdown on projectile ender, damage ender or wall splat ender, that ender is useless. The only thing he got was the blade dashes are harder to low profile. They nerfed his frame traps, made them easier to shadow counter too making medium laser hit twice. Unless you can special cancel it after the first hit instead of the second, he has almost no frame traps left. His light is now dp punishable as a frame trap. His medium doesn’t create space anymore, so he literally cannot get someone who is already in, out with his changes. Depending on what they do to his meter, playing against Orchid, Sabrewulf or Riptor will now almost require a character change for Fulgore mains until some things are tweaked. His Heavy laser looks slightly more useful than his post nerf old one at least but still… I don’t get why he continues to get overall nerfs. He is already one of the most underplayed characters, and now certain matchups will just be frustrating without the ability to push them back with medium laser a little bit.

As for Kim Wu, her face is okay. Not great. Could use some more texturing.

To me it seems like the lighting on the stage makes all of the skin textures look flat. They said that all of the stages will have new lighting in season 3. I’m kind of nervous about that.

In regards to Kim Wu’s face- I think the reason people are saying she need work is because shocker she looks like an ACTUAL Korean woman. (or is she Chinese?) She has very realistic features in my opinion. I like that. Her animations can use a little polish though. She’s got some Maya stiffness going on or something.

Some of the additions for Season 3 are really cool. Glacius got some treatment that was exciting to watch. The Maya changes were pretty substantial as well. I like the tools Aganos has now. All in all I thought the changes were refreshing. I wish TJ got his other auto double set back.

It seems like Sabrewulf’s instinct really caters to higher caliber players. A casual player may not find much joy in it.

No juggle potential? His new lasers will give him juggle potential. That ender is not useless. It opens up some juggle potential with the new lasers and overhead. Plus you use it to end a round for a boost to your reactor. For those melee mad houses,stay back and zone. Fulgore is a momentum based character. If you have the momentum,you will get amazing benefits. If you don’t,then the benefits aren’t given to you. Also if they shadow counter the medium laser,just pip cancel into a dp and sacrifice a pip so they wasted a bar.