Look at him, all around his face there is a hard craggy shell but in the center its all fleshy and weird. Its almost as if he at one point had a full armored face-plate but it was forcibly removed somehow. 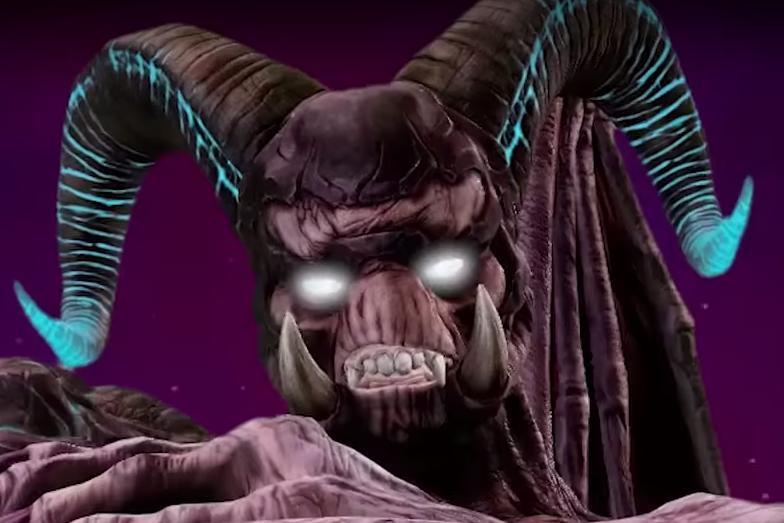 I take back all of the things I’ve said about Gargos’ looks, its not his fault he’s disfigured! Sure he looks like a monkey now but so would you if someone peeled off your chiseled rock-like features! He probably had a nose too, but now he’s a freak and he’s sensitive about his looks!

That’s how I look at him now, I can get over his horrifically ugly face because he must have looked cooler before Eyedol smacked him up side the head with his mace. He’s like one of those He-man figures with the battle damage parts, he’s just stuck in fugly mode.

Cool theory but unless eyedol gets released this season I’m just going to assume that eyedol got even more of thrashing that he got skipped for a season.

Well if that’s the case eyedol must have it worse. I mean two heads and one eye each? Do they share glasses? What happens when one head disagrees with the other? Do they argue? Do they fight?

In human terms we call that “beating yourself up.”

I still think he removed his face to create Omen…

I agree that his face needs reworking but I’m sure there are those that like this design.
At least his Retro Costume holds up decently.

Hmmmm I do see somewhat a resemblance…but the fact his face was a “mask” is kinda awkward. I mean around where his big tusks are and omen’s mask…it doesn’t look like the mask actually fits.

Speaking of gargos. Was it reported already that he has no footsteps sounds?

Not saying his face WAS a mask initially.

I suppose. But the actual features at least some of them don’t add up.

Omen did build himself up some off of Jago I’d imagine there’s some distortion.

Possibly, only omen would know. Speaking of him

Him, jago and shago all share the same time out animations for both win and lose.

His face is pretty bad (not as bad as Tusk or Kim), but what grinds my gears is the much superior DH Gargos face is still on Shago and Omen activations.

GARGOS IS IN THE GAME AND THEY STILL HAVEN’T FIXED THAT DETAIL.

I think is face is great.

Is one of the best quotes i have ever seen on the forums.

Well it looks like Gargos got the last laugh, after Eyedol crushed his face Gargos cut Eyedol in half.

Cool theory but unless eyedol gets released this season I’m just going to assume that eyedol got even more of thrashing that he got skipped for a season.

this person was kinda right…

I think the fact he looks ugly means he is a monsterous figure. He doesn’t have to look pretty this is one of those shows where the baf guy is some pretty boy, he’s uggly and likely damn proud of it.

Though if it IS an oppen wound perhaps Eyedol had something to do with it?

I never said I wanted him to look attractive, I’m just one of those folks who thinks Gargos’ new face is kinda lame and therefor “ugly”. lol

Eyedol is hideous but beautiful.

You guys confuse me in that regaurd lol. I suppose it’s not the kind of face you’re looking for I suppose.

Yeah to simplify it, people who call Gargos ugly are basically saying that they don’t like his new face, simple as that.

Indeed but it is vague it makes someone like me think ya wanted him to be “handsome” lol Maybe next time you guys should be specefic on what kind of “ugly” you want.