Hey everyone…Do you have a PS Vita or a Nintendo Switch? Or both? If so lets discuss your favorite games for the systems…or games to steer clear of. I just got both fro Christmas and I’m heading out to get these few games tonight.

I have Maria Kart 8 Deluxe coming in the mail tomorrow…the kids are going to love it. We also have Zelda BOTW and Street Fighter the Final Challengers …both awesome games.

I’m picking up Assassins Creed Liberation, Mortal Kombat 9, and Uncharted Golden Abyss. Also going to grab a screen protector and carrying case if they have them.

Being Im new to VIta and its an older product…is there anything on the VIta that is cool to do or that it can do that I may not know about? I read there is a back side touch pad? I didnt notice this on it so maybe I read wrong. Memory cards seem expensive too.

I’ve had both, still have the Switch. I didn’t really have a lot on the Vita though, nothing really special…I had mostly got it to play some PSP games I have on my rarely-used Playstation account. I rather liked Dragon Quest Builders, though it’s not a PSP exclusive…in fact it’s coming to the Switch soon. And yes, memory cards are stupidly expensive for the Vita.

On Switch I have the obligatory Zelda BOTW and Mario Oddesy, as well as Mario Kart 8, DOOM, and Skyrim. Ultra SF2 is pretty neat, though the joycons are @$$ for playing 2d fighters to be honest…good to have fun with, not for competition. Blaster Master Zero is pretty neat as well. If you ever liked the original NES game it’s a pretty neat remake with a lot of good quality-of-life enhancements, as well as guest characters such as Shantae and Shovel Knight…weird but neat.
I’ve mostly been playing Skyrim on the Switch lately though.

I actually don’t own a Switch (though I’m starting to think about getting one) and I sold my Vita a while back, which I kinda regret, as there’s some good stuff out there for it.

I had Darkstalkers Chaos Tower and Uncharted and really liked both of them, though Uncharted might not be quite up to par with the later Uncharted games. Felt to me a lot more like the first one, but that’s fine.

Also depends on what kind of games you enjoy. I know there are some really good RPGs on there like Persona 4, Final Fantasy X and X2, though I never owned either of those. Also heard Soul Sacrifice was good.

I had mostly got it to play some PSP games

Same here. Had a lot of PSone games and PSP games. Stuff like Final Fantasy Tactics (which is everywhere, I know) and the PSP Metal Gear Solid games, which were really good IMO. Portable Ops and Peace Walker.

Can you still download stuff on Vita? Like is the store still up and running? I honestly don’t know. But if it is, there should be a solid amount of older stuff to buy on it.

I bought a Switch Zelda wired controller pad that allows the Street fighter 2 to handle much better, but when playing on the portable portion of the Switch and the Vita for that matter on SF… it can be tough to pull of moves with the thumb sticks.

From my understanding it might…it depends on the game and how they handle their data management. There are already several 3rd party titles that require pretty large downloads to play the games…I can’t recall which ones off the top of my head, but my suggestion is get as large of a mSD card as you can comfortably afford, if for no other reason that just to futureproof.

I have PS Vita, mostly for P4/ Dissidia

I’m playing Assassins Creed Liberation now… its really good! You can switch between Assassin, Lady and Slave to maneuver through the streets of New Orleans. It is set during the same time events as Assassins Creed 3 in America during the revolutionary war time period.

Up next is MK9 and Uncharted Golden Abyss.

One issue I have with the Vita is it is hard to “hold on to” for extended periods of time. Its too small fro my long fingers LOL
Im going to order one of these grip thingy’s… 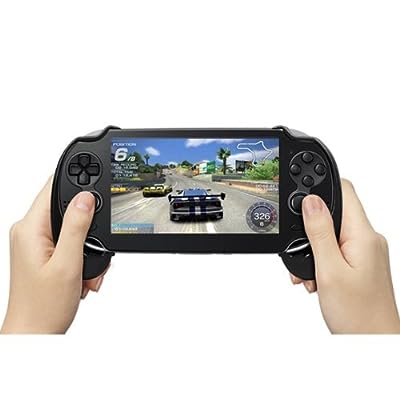 Oversized action buttons for easy gameplay that easily clips on to the back of your PlayStation Vita. Features Trigger Grips and satin grip finish for enhanced comfort designed for extended game play. ...

I went to get a Memory card earlier and they were out… but my Game stop has another store manager driving one over for me tomorrow from another town 40 miles away. ( Talk about some customer service!)
Anyway…its buy 2 get 1 free on preowned items and I have a preowned carrying case IM getting too…so that means I need 1 more item for free. WHat gameshoudl I get?

Anyone played any of those games and are they any good?

Just got a Vita for Christmas. I have

Don’t have a Switch though. Might consider it when Bayonetta 3 is our, but it doesn’t have any exclusive games on it I want. No real fighting games, no hack-n-slashes. I like platformers and Racers too, but I HATE Mario, and games like Yooka-Laylee and Sonic Mania are on other consoles. Nintendo, please step up your Switch releases.

To anyone that has it, how is Xenoblade 2 Much Anime? The first game was absolutely amazing, but I’ve been a little skeptical about this one with everything I’ve seen about it so far. Besides the amount of anime, I hear it’s good but I don’t have a Switch to try it out myself.

…sorry, pet peeve. It’s one of my favorite NES games.

Believe it or not I don’t have either system. For Vita I might recommend Dragin’s Crown. Despite some questionable design choices around depictions of the female characters the art is beautiful and the gameplay is great. It’s an evolution of the side scrolling beat em up (think Capcom’s D&D Games) with an added equipment grind to add to replay ability. Branching pathways and multiple boss fight variations together with on and offline multiplayer, PS3 cross save and cross play and a PS4 version coming soon. I really feel they cracked the code in how to make this style of game relevant without the quarter eating arcade cabinet and I wish people would copy their ideas.

DUDE! Dragins Crown looks awesome! Thank you! Oh man I hope they have it at Game stop… that will be my luck they dont have it. Its from the same Devs that did Odins sphere which Game stop does have because the manager recommended it to me.

i have a pet peeve too, rats. i dont like em

i still have my vita but i don’t play it anymore. i was a fan though. mainly used it for the indie titles that didn’t release on xbox at the time. Hotline Miami, The Swapper etc as well as PS1 classics like Resident Evil 1,2 and 3.

I remember it fondly but the price of sony’s proprietary memory cards was ridiculous and several of the home console ports didn’t transition well to the limited hardware. Although Final Fantasy X ran brilliantly. Those Blitz ball sections were far more irritating than i remembered though.

I eventually bought a 3DS for Monster and never looked back. Looking forward to world on my Xbox One X next.

Yeah, I’m that way about copperheads slithering up on my front door step, which actually happened on several occasions this past summer, but what does that or rats have anything to do with Switch or Vita games?

We had 2 - 3DS Xls and I didnt find them very useful as there arent many games at all that I like. I mean you have the mario and mario kart, SF 4, Castlevania… now Metroid… but overall just not much really worth a damn. IMO

@BigBadAndy… I got Dragon Crown and its funny because the female manager at game stop was telling me to get Odin Sphere and coincidentally Dragon Crown is by the same devs… and when I brought it to her she was like cool… I played it but get ready for the girls have HUGE BOOoBS …LOL…I was like yeah I heard!