I have encountered several issues while trying to get the PC version of the game up and running. I’ve have some work arounds for a couple of them so I wanted to get this out there as soon as possible so people know what to do while they work on internal fixes.

First the game installs fine it was quick and painless through the Xbox Store:

FPS ISSUES
For those running 144hz monitors you may encounter an unlocked frame rate which results in unplayable speeds of the game. A work around is to set the monitor you are playing the game on to 60hz instead which should fix the issue and set the game back to default 60fps. Also make sure your Geforce Control Panel and AMD Catalyst are set to default Vysnc enabled.

CONTENT SYNC ISSUES
Some may be encountering the issue of switching from Xbox One to PC and not having their content properly moved over. They are working on a fix for this.

STREAMING LAG
Trying to stream the PC version from Xsplit or OBS may result in terrible screen jittering or lag using Screen Region. I wasn’t able to find a fix for this however using Geforce Shadowplay worked well and showed no signs of those described above problems. I’m not sure if this is an Xsplit problem or if the APP just isn’t compatible with this feature yet.

It seems another fix is to do a clean install of NVIDIAS latest drivers which fixed the lag issues with Xsplit,

Other than what I have listed above the normal games works and runs well.

Thanks for the heads up, but why would you ever want V-sync enabled in a fighting game?

Because the game doesn’t have locked framerate and the gameplay is tied to the 60FPS logic, so if you run above that you’re running the game faster. And currently even with the work around of forcing your screen to 60Hz (Something that’s not available on all screens) there’s massive screen tearing issues which makes it really painful to play.

As bad as the small amount of input delay from having V-sync enabled can be, it’s better than the alternative currently.

My game constantly crashes after hitting space/menu to continue at the Checking DLC screen.
Windows is up to date, latest graphics drivers too.

On Win10 preview program, but that hasn’t stopped anything before.

I have tried this

I have not experienced this issue myself so I’m not sure how to resolve it. Ask @rukizzel or @TempusChaoti

Which build are you on? Do you happen to know if you are in a preview build? 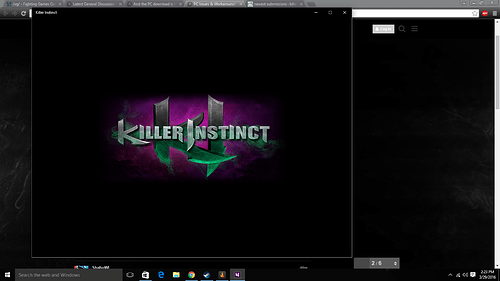 Having an issue where I go to launch the game and it gets stuck on this screen. Doesn’t even boot up at all. If I leave it for about 5+ minutes, it just closes out.

Not too sure what is wrong here unless something went wrong with the download and I just have to reinstall it. I’ve tried signing in and out of my account and restarting my computer.

Sorry i dont understand what preview build is. Do you mean what win 10 version i have? Version 1511

Jesus Christ, WHY is Windows Store so damn useless?
I can’t choose where to install the game… I have 4 partitions for a reason, my main drive is ONLY for Windows and drivers!!!
And why can’t it just install so I can have a normal icon? Why does this ■■■■ have to go through the store?

And I was looking so much forward to this… freaking Windows store messes everything up!

Cool! Someone else is having the same problem, for me the game just flashes and then dissappears and doesn’t seem to properly boot at all. If anyone finds any fixes for this please inform me, I’ve been waiting for KI on PC for a long time and would really like to get my hands on it finally.

Read the store page… It explains how to change it.

Could either of you do me a favor and go to event viewer in Windows?

Look up application events and see if an error registered for KI.exe or whatever it’s called, it will help with troubleshooting

One goofy trick is to go into device manager, find your graphics card and disable it

Run the game and it will work on the Intel one.

Shut the game off, re-enable your good card and it should be good to go

Far from the only problem with Windows Store, but thanks… that at least removed the worst of it…

How the hell did Microsoft even agree that it’s a good idea to force people onto an utterly useless “app”?

At least install it “normally local” so we can just use it like a normal program… Not as a freaking app, that we can’t even find icons for!

Edit: YAY! Now I have to redownload!!!

2nd Edit: How the hell do I even uninstall KI again? Theres no uninstall botton in the Store, it’s not showing in the program remover in Control Panel…?

I have the same problem!

That sounds like a weird workaround, but I’ll try it out after I finish downloading it again. But here’s the error log I found in event viewer for now:

Could you try this before hand, check on C:\Program Files\WindowsApps

And make sure the user ALL APPLICATION PACKAGES has access?

I have the issue of not being able to sign in to Xbox Live, anyone know anything about that 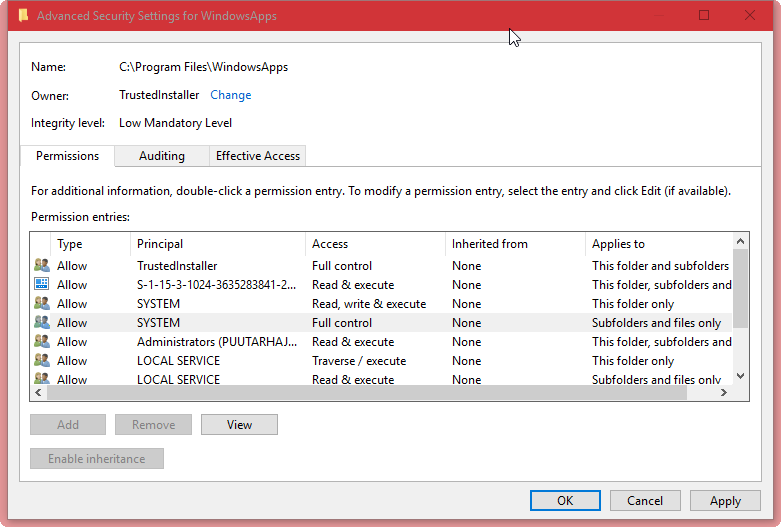 Heres what it looks like, I have no idea if theres any problems here