Just bought Overcooked on XB1. Not only fun with friends but also playing this with (or against) your kids can be entertaining. Maybe worth checking out if you could use another family friendly game…

Thanks for the heads up

I’ll have to check it out. What is it like?

It’s a co-op game revolving around cooking. Below is a random video on YouTube but it shows off the game’s features and mechanics quite well.

The ONLY thing stopping me from buying this is that it’s local-based only, as in no online multiplayer. I rarely have friends or family that visit and want to play games, so sadly, this game, no matter how good it actually is, just doesn’t cut it.

Good thing to know. I had not realized that (yet).

I watched the “Lets Play” guys play this game.

It is absolutely a “couch game” that deserves to go down in history.

Its a family-friendly food preparation game that requires tons of communication and on-the-spot planning to get the food cooked and out the serving window as quickly as possible.

Naturally, Chaos ensues. As you play, the level design gets more and more complex to keep you on your toes; racing around the kitchen in a panic. At the end of every round, everyone playing will reflexively lean back, let out a deep breath, and say “That was nuts!” You will never receive more of an adrenaline rush from such a cute, simple game than you will with this one.

(I enjoy just watching it. I plan to play it with my mother sometime.)

You guys sold me. Hopefully I get a chance to give this a go with the kids tonight.

My wife and I bought and completed this over the weekend, it’s really fun and definitely requires coordination and teamwork in order to get the top end three-star rating.

We’re definitely going to try four person mode the next time we have guests over! I also hope there will be additional DLC stuff down the line, there are a lot of different kinds of food which you can’t make yet.

I have a 2 year old, but when she is a bit older I would love more of these games, especially since there are few couch co-op / party games here, one of the few downsides of xbox…

Holy ■■■■. This is either the best game ever or the work of the devil. Lol. The five year old is pretty useless but the 8 year old did great. My wife is somewhere in between. She can get the plan better than the kids but isn’t as good at using a controller as the 8 year old. Hilarity ensues. Both kids laughed until they peed. My wife and I put them to bed and then came back to try to make burgers…

It’s like burger time plus Tapper plus Mario party…

I’d love to play this with four adults and a bottle of wine.

Yeah, I can’t wait to try it with a full group of four. I was also pleasantly surprised to find it ended up being a nice little achievement point bump; 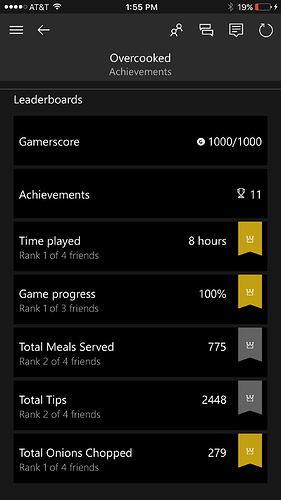 Yeah me too. I have been trying to get (trick) people over to my house just to try the four player co-op.

I have done the four player and it is an absolute riot. I need to bump my five year old for a better player

, but you are not going to be disappointed.

I love how my kid panicked when the whole kitchen was on fire. She kept pressing

never realizing that she was merely picking up and putting down the fire extinguisher like a hundred times.

It would be nice if there is a franchise mode where you can decide to hire or fire family members. But then again, that would create family feuds, so probably not good, I guess. (“son, good job! Now fire your sister”, lol)

I heard them talking about this game on Giant Bomb’s podcast and I think I might have to get this. My lady loves the diner dash / cooking dash type of games, so this might be right up her alley and we can actually play it together, which is a bonus for me.

Can’t wait to check it out!

Can someone tell me if this is fun with only 2 people? Is the campaign exactly the same?