News only in March (CONFIRMED)

This Thursday will be in SF for media showcase w/ @XboxP3 focused on our great lineup of Spring games, all of the coverage will hit on 3/1.

Ok if the next info we get on KI will be on the W10/Xbox event like some (including myself) predicted that means then in March.

Media will be under NDA till that point too as he replied to someone.

It’s always good when a big wig says these things for you… I wanted to tell you all, but didn’t know if i could release the date. Well now that he has - info drops March 1st!

I was expecting you to come here and say that we would get news sooner :’(

The worst part is that we only get a release date the month it releases.

My prediction is that we get a press release on Monday or Tuesday next week revealing the release date, price, content, etc.

I’d be pretty shocked if that didn’t happen actually.

But… But…But… Alien comes out that day…

Not surprised. Lets raise our hopes once again, that on March 1st we will finally get decent amount of info. So the game comes out in March and we still won’t know til March when and if it comes out in the month and what it will and won’t have.
Wow there’s forward planning right there

Eh, it’s just a few more days guys. S2 wrapped up last July? I think I can last until Tuesday…

Maybe the game will drop March 1, lol. Don’t kill me, but since I am out of town through March 25, it’s pretty much okay with me if it doesn’t show up before then.

So what about the teaser trailer on Wednesday? I’m confused, sorry

They mean news coming out of the conference this Thursday won’t drop publicly until March 1st. Unless somehow it is leaked which I could totally see happening.

Eh, it’s just a few more days guys. S2 wrapped up last July? I think I can last until Tuesday…

Well if MKX is your thing too there’s a Kombat Kast for Thursday and Friday.

The worst part is that we only get a release date the month it releases.

Think about it though…If S3 Releases in March. And all KI news will drop on March 1st…We will get to know everything about S3! (Hopefully)

I believe that’s still a thing. I think March is when the S3 release date is revealed.

Rukizzel - Soooo…a teaser on Wednesday, and no other info until Tuesday correct? Just want to know when to check back?

whait what? did i miss something? is the teaser confirmed to be wednesday?

Well at least we get the Tease from Arbiters Trailer tomorrow. 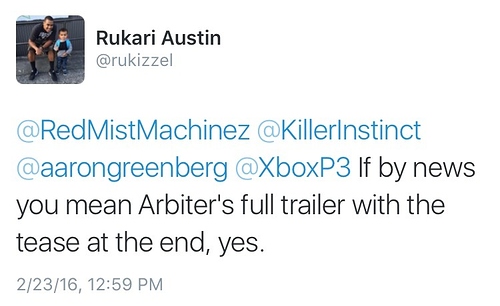 Damn, I was expecting news about S3 this thursday, but now we need to wait until next week… That sucks

But at least tomorrow we will get the teaser for the next character, and hopefully, later this week, the Arby’s gameplay stream

Rukari already said he will try to get the Arbiter stream lined up for next week, so don’t expect it this week.
I wouldn’t expect anything after the Arbiter’s trailer/tease until 3/1.