Yeap. Title says it all. Highly suggest you read the whoooooole thing before making a reply mkz? It’ll be worth it

I have been silent for some time just to really sit down and to have my thoughts put together (as clear and to the point as possible) after watching Kim’s reveal at the KI World Cup. As many like her re-design, there are others who are very disappointed in her appearance. I am sadly one of those people…

At first, I thought her design was going to be her classic (KI2) costume and was stoked about the overall look. It wasn’t until later that I shortly realize the re-design was official and felt ‘meh’ altogether…

What made me more disappointed (and this personally makes me feel like I’m the bad guy now. I’ll later explain why.) was the fact that Kim Wu is officially… sigh A typical super young naïve College fashion student…

Before her reveal, for a long time (no joke) I legit had some nightmares about her becoming that type of character (or worse) and had a fear that it would happen as I preferred her in her youth, BUT rather more matured/serious yet big personality altogether. (Or at least a college graduate so to speak) And since she is a Fashion designer, I feel IG could tweak more on her default outfit since I feel it didn’t speak “fashion designer” imho… Felt like something is missing… (again just an opinion)

Now for the ‘badguy’ part. In the past forums (and I won’t mention any names) there has been a few heated debates on what Kim should be like, and later (in this forum) have told a few others that Kim’s profile was still in an early development. Feels like what I said was either unclear or just didn’t make any sense the whole time… Eitherway, I digress. I have accept the defeat and can’t do anything about it nonetheless. (Probably going to be a laughing stock but ah well…)

I really. Really. REALLY love what IG has done with her playstyle. The animation with the flames moving with her nunchucks are phenomenal and the stage is not too bad as it is still a WIP. Overall a super fun character, and wish I can try the her out someday…

Even though I didn’t have the best reaction on my end as many would hoped (and probably disappointed some folks here), I’m glad that most Kim Wu fans are happy with her reboot thus far. I’m also glad that I was able to help build the fan hype throughout the years until the very end of her reveal… My job here is complete.

8.You guys will certainly WON’T see the last of my Jago/Kim Wu fanarts so stick around fellow supporters ~!! (already got some ideas bahaha

I have question for you… what about react Kim Wu’s trailer??

lol at number 6. Anyway I wouldn’t be surprised if Kim Wu got a costume inspired by one of your designs.

I had a longer post here, but I think this is really all I’ll say for now:

Origins are just where characters start… not end

Is Kim Wu still work in progress or is what we saw the final build?

I am one of your fans. And I think Kim Wu design is pretty cool while you play her, the animations and fight style is just incredible. Just didn’t like the animation of her face when she speaks in the winning stance.

I kind of understand why IG needed to create a “cheerful” and excentric character in order to look for a balance inside the game. I like her and I really want to play with her. BUT, the thing of saving the world, being a fancy student I just feel is weak, like another american bad movie. But still I like the enthusiastic personality behind the design. Wish she could be just maybe an ABC (american born chinese, this is how we call them in China) that is seeking for her family traditions in order to learn more about herself and find out about Gargos.

By the way, AMAZING SOUNDTRACK my favorite in the game right now!

Kim is ABC (as you put it), but she’s rebelling against tradition, not embracing it. Lots of family expectations were on her… and being the chosen one wasn’t one of them. You’ll have to wait for S3 to learn more.

We’ve not launched yet, so everything is still being polished. We’re working on multiple characters at once.

On #6: That’s a reference to the ending of the last final episode of Avatar: The Legend of Korra

So im going to guess that she is one of the characters in the game ( as i know of) to have “the hero’s journey” story… like From start, rebellious hard ■■■ atittude, who doesnt care… to the end where there has been MAJOR character development, with the abyss feeling defeat, have that ONE moment of relief and Transformation where she knows what she must do, then finally accepts what she must do. ( i believe her trailer explains that well.)

That’s pretty interesting. I am hunger to know more about her.

Since Kim’s outfit is possibly a Beta, (Unless I’m wrong yet again <_<; ) I did… happen to make some quick doodle suggestions that could ‘mayyyyybe’ better her current look that I might show. (Keyword ‘maybe’)

RZ I really like your art and your drawings. But let’s calmly …

That’s kind of what I figured. The “giving fate the middle finger” line was a pretty clear indicator of this.

While I don’t mind Kim’s more… cocky personality (for lack of a better way of describing it. I kinda got that vibe from her in KI2, as bare bones as that game’s story and character arcs are), I do hope we see some kind of character growth for her in story mode when the time comes. She doesn’t necessarily have to lose all of her bite, but maybe she gains enough maturity by the end of her character arc to want to be mentored/trained by Jago or something.

I think that works for her, because, hey, even Luke Skywalker went from a whiny farmboy to a mature Jedi Master over the course of time (to cite a famous example of the Hero’s Journey). And without going too far deep into gender politics… I’d love to see that kind of character arc reflected in a female character for once.

Kinda breaks my heart a little to learn that after all the years you waited, Kim wasn’t everything you hoped for. I never played KI 1 or 2 before I played the original release in 2013 so I was never a Kim fan since I never knew she existed.

I didn’t know what to expect from the reveal so I was satisfied either way, but I’ve been following your work since KI Central and it kind of kills me a little that it didn’t blow you away. I guess I just have the weird quality of being overly sympathetic.

…as I preferred her in her youth, BUT rather more matured/serious yet big personality altogether.

In my opinion the problem with that alternate route is that we already have Maya as a young-but-matured-through-circumstances female warrior. I would even say that Orchid also fills that role.

I remember before the release of Riptor.

I said in a post, I would like to see a more animal riptor, more dinosaur and less snake, less human.

I was crucified, the fanatics called me mad, created explanations and theories to say how much I was wrong.

It was released, Dino more than ever, perfect in my eyes!

The fanatics forgot everything and now love the character. Forget humanoid, forget the DNA snake part. It is perfect now!

HERE in this post about Kim Wu, I see exactly the same thing!

fanatics complain, all other people love. Soon fanatics will love!

I like Kim’s outfit. But your art and references would be a nice alternate skin. Hopefully IG will do some other outfits. I actually like her new look so far.

LMAO! sry had to with that question since she does remind me alot of Korra

. Speaking seriously, I’m actually relieved that nothing was taken the wrong way after sharing my thoughts (thought you’re gonna hate me haha

) … Glad to know she isn’t the naive type as well.

Btw, big thanks for the chibi cinder re-tweet~!! It was an honor

Get well soon too ya hear?

(forgot to add to the post that Kim Wu’s music was nicely done!)

@StarElite023 Hmmm I dunno really. Not sure if they’re allowed to take a design from a fan and use it since there might be some policy involved :\ . After checking out the past works that was made, the closest costume that could resemble this Kim Wu are these: 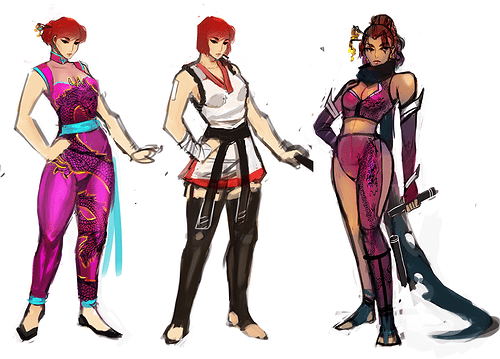 @MEAAnTwAn310 @EleganceLiberty Hmm… Seems pretty legit pts on what you guys said there. There’s only one way to find out. fingers crossed

@Zeybuccaneer Big thanks, your works are way better :). Mmm you’re right, kinda got the best of my emotions there eheh…

The change was ‘slight’ tho. (probably gonna add it to the KW Alt predition list)

@RGLOfficial ■■■■, I’m really sorry for making ya feel that way.

Don’t worry about it tho. Guess overtime i’ll eventually grow into liking her reboot.

I’ve always loved your sketches of Kim Wu and your ideas even if some seem unfinished. I was really hoping that IG was going to take your designs as examples for her standard and alternate outfits. They have ~ a month to iron her out, but I’m not crossing my fingers. Her movements look stiff as a rod and her face needs some texture and fixing like the miracle they pulled off from early TJ to current which I think IG pulled off really well.