A Commentator/Competitors Opinion on the New Level 4 Enders

But in this case, we’ve decided to go ahead and announce that our first community feature will be the ability to toggle Ender Cameras On or Off in Content Update 3.1!

Hell Yeah! Huge shout out to the community, and many thanks to the devs for hearing our pleas.

Wow, they actually did that. I sincerely didn’t think it was a possibility.
Well, we all got our way then.

It’s always tough when something suddenly splits up the community. We’re all here because we share a common passion, the love for the game, and we just want it to be as awesome as possible. But difference in opinion can be enough to cause a split… especially over features that ends up being one or the other.

But this time… it became both. Kudos to the devs for being able to do this. <3

I find it silly that people say KI would DIE because of the new level 4 enders. Don’t get me wrong, I’m glad they got the best of both worlds but…Seriously you guys exaggerate the worst sometimes “KI is saved?” maybe for you. Maybe we should do that everytime they get a new feature in.

KI IS SAVED THANKS TO ULTIMATES

KI IS SAVED THANKS TO EYEDOL

Still on a happier note it’s nice they are able to keep it optional. Now I can have more dynamic fights! Let’s be rateful the devs are open to our suggestions and never take them for granted. And also maybe lose the doom and gloom and exaggerations.

See you all on the battle field on the 29th!

I never said it was dead, Im like saying it was saved from falling off a cliff that may or may not have seriously injured it.

It’s just I was finding so grading with the way people were acting lately. So I guess I mistakend you as one of those folks who say KI is dying cause of a change.

That I find is pretty much an exaggeration personally. I worry if people will now go shouting 'KI is dead" everytime something comes up that they don’t want. 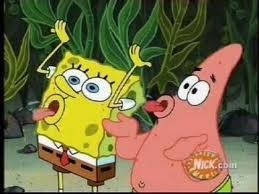 shout out to the one man boycott…lol

If they ha ddone that because of THAT guy I worry if that means more entitled people will make threats and hope to change the game THEIR way! next thing you know people will want everyone to be Jago and all KI girls will have lare busts and such, oh and everyone but Jago will be unplayable…

Probably not. Chances are they listend to the general feedback overall and decided to make it a toggable option.

Alot of people spoke out against the feature, amongst them pro players. It worried me, because like I said, I like the feature, so I thought the devs might end up taking it out. I’m glad they came up with a compromise though. ^^

Can someone post that .gif with Master Chiefs in the car?

Yep I agree. It’s possible to compromise. There’s really no reason to remove a feature other folks will like because someone else doesn’t like it.

I’m glad the devs understand the ideas of grey and not black and white.

Yeap I think the pros pushed the turning point. I too am glad for a compromise.

Just goes to show if the kid cries loud enough mom will always buy him that ice cream cone.

I kid of course, congrats to anyone who wanted to toggle it off, glad the devs are listening and of course more options are more better-er.I will be keeping it on however because clearly the devs thought it was badass enough to include in season 3 and so do I. >w>

I just dropped 45 bucks on the action figure just for color 10. now another 40 for ultra.

all this because the devs made poor decisions and were secretive. literally everything they have touched this season fell short.

if I had it to redo again. I wouldn’t give them 1 cent. guess what? I just made a toggle to turn my wallet off from IG permanently.

This update won’t be out until late April. We will still loose most of our new audience that aren’t aware of this future update.

You could just not have bought those things. It’s all on you and your own self-control, your own decisions. If you bought something you didn’t disagree on, then it’s your own fault. XD

This update won’t be out until late April. We will still loose most of our new audience that aren’t aware of this future update.

After every patch with a new update, there’s always been a notification popping up telling you about it when you turned the game on. So they’ll be aware.

It worked. My job is done here.