Anyone else here bought some of the KI Figures?Ordered mine thursday should be here tomorrow,is anyone looking forward to wave two of the figures?Who do you want to be added?What specialty figure do you want to blow your life savings on?
DISCUSS

I want a aganos figure

I’d imagine he’d be a specialty figure since he’d probably be a full 12" and they may make him light up and add his stage like they did for the spinal figure and jago special figure.

I just asked someone about this in another thread.

I wouldn’t mind a Fulgore, Glacius or Spinal.

Maybe someone can post a picture of theirs here?

I can tomorrow I got all the $9.99 figures but they don’t have spinal anymore because they sold out since he was so limited.
Glacius isn’t here yet but I suspect he’ll make it in wave 2.
I’ll show off all of mine tomorrow.

Already got those I wanted out of Wave 1 and I’m REALLY killing over for an ARIA figure.
I can’t play her to save my own life but she’s got such a cool appearance!

ARIA does look cool but I prefer her Heavy Metal robot design on her retro costume.
I really want to see a light up cinder figure even though i’m absolute trash at Cinder.

All of the remaining KI characters

I completed my collection with the Electronic Jago friday… its pretty cool…kind of funny at times when he starts making sounds.

Ordered fulgore,jago,hisako,sabrewulf, and LE shadow jago during the sale that just ended and should be here today. Wish i could have got my hands on spinal but maybe they will release him as a regular figure down the line

I currently have LE Shadow Jago, Sabrewulf, Hisako, Jago and Fulgore. In wave 2, I’ll be looking to get Orchid, Cinder and probably TJ as well.

As for who I’d like to see after that… Kan Ra, Sadira, Thunder, Glacius and Mira would all be pretty awesome.

I bought the entire wave 1 but I’d love a tusk or gargos statue, ESP with his wings out stretched.

I basically don’t collect anything and generally don’t buy videogame swag that’s not… well, actual games. But I did buy the Glacius t-shirt that @OhAnodyne did the art for, and I would definitely consider a Glacius figure if it did him justice. I think he will be tough to do but they would get my money if the did him right.

So I found out these figures give an unlockable skin in game. Is there a place to view these skins?

I remember seeing Circa Nicky’s red Fulgore and being confused at his skin and now it makes sense… but I’d like to see the others.

i have a shadow jago limited edition but thats it. I would love to get a glacius, mira, aganos, gargos, and an eyedol… would be awesome.

Wave 2 has already been decided, no release date yet though. 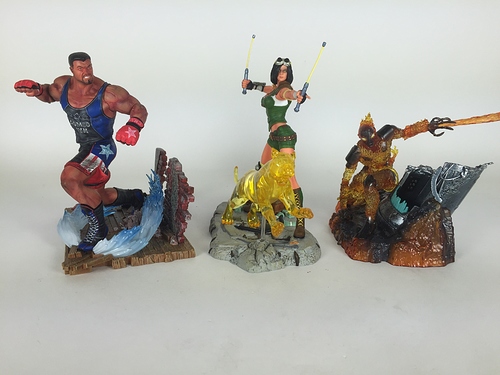