We understand that there is a high cost factor to produce a stage, but even for DLC but do stages for all characters.

i would love that as well. i just wish they could come with a dlc package with new awesome costumes for the whole cast as well as stages for everyone i would pay 20 dollars easily for that

I’m really kind of curious if MS & IG will ever take this near constant level of feedback from people and run with it.

Don’t get me wrong, I’m not saying the feedback is a bad thing. I mean, in the Gargos stream thread, my response was that I absolutely loved the character and I wondered if he could potentially be the best boss of all time. He’s such a well realized character.

But at the same time, there’s still this small feeling that prevents me from being 100% psyched for him and that’s the fact that he doesn’t have his own stage. His own habitat. His own unique environment that suits him, plays his music, etc… Like when you fight him, you’re fighting “THE boss and you’re doing it on his turf.”

Not to mention the tradition KI’s had with characters and stages. I know that couldn’t last forever, and yet…

I’m still looking forward to Gargos, no question. But honestly, Gargos and Mira might be my two favorite character designs that they’ve done for the entire game, which is why it’s really kinda sad that they’re the only canon KI characters without their own stages.

Whether it’s a community fund, which I’ll gladly pay in to, or separate DLC… I know MS doesn’t want to be seen as taking content out, only to sell it to us separately, but I kinda think that ship has sailed at this point.

The fact of the matter is that the stages are still an issue for a lot of people months after the announcement and I don’t see it going away any time soon. I know they’re expensive and time consuming, believe me, we’re all well aware of this. We might not have the numbers in front of us, but given how quickly we were able to raise money for the last community fund, I think we fans can and would be more than willing to help out.

For me, it’s not just a consistency thing and it’s not just a tradition thing, though there are people that feel that way on both counts. When they initially said three stages, I trusted in MS & IG’s vision and I still do. But that doesn’t change the fact that I miss these stages and I’m willing to pay for them.

So if there’s any type of way that the fans can help cover that expense without MS feeling like they’re charging us for something that should’ve been in to begin with, I think a lot of people would be open to it.

I normally hate using “we” and speaking for others, but given how huge that initial announcement thread was plus the fact that this topic comes up constantly in several threads… I really think that once the season is over, that MS and IG should really contemplate the idea of adding a few more stages and how best to go about doing that, even if it takes a community fund, even if it takes paying for DLC.

If real boy Shago was the main issue for season 2, then this is definitely the issue for season 3, and I’d argue that it’s probably ten times bigger than the Shago issue was before. If you want to help support the tourney scene, this would be a great way to do it. At this point, aren’t there enough reasons?

Here’s the thing from a game perspective everyone getting a stage makes sense. But if we are going by the characters and stories it doesn’t. Mira should’ve got a stage over arbiter. Arbiter rash and gargos shouldn’t have stages because they all came from a portal so technically their stage should be Kahn rahs

I would happily pay ALLOT of money for Mira, Gargos and Rashes background!

just going to leave this here… 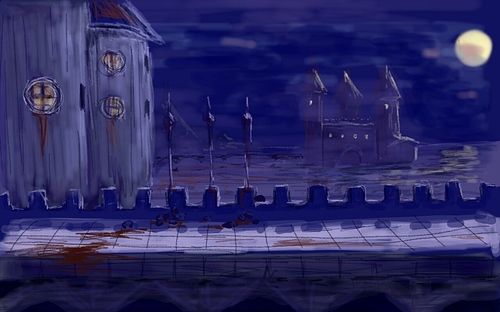 I made a sketch for Mira’s stage. Let’s hope we’ll see something like that for our vampire.

Did you see Gargos’s hero art? I’m not sure if it’s his space stage…

its true that they should of made stages at least for the KI people, so not only tusk and kim wu but mira and gargos as well

especially gargos, a boss without his own stage is just…sad

takes away so much from them, makes it so much less epic fighting them in some random stage then on their own turf

I really hope the devs consider this for crowd funding, but so far none have said a word about all the requests for the missing stages so I really dont think its going to happen. Dissapointing, the one scar that will never heal on an otherwise epic game

Once IG is completely done with S3 I would definitely contribute to a community fund of some kind for some more stages. But to play Devil’s Advocate: We already have 20 stages and that’s ALOT of stages!

Hopefully we can do a community fund for them.

What else would they make them? A physical CD for just three stages?

There’s also the two remaining characers to come in S3

Not just Mira, rash , and Gargos… But even the remaining two we don’t know yet , all need stages . Every single character in this game needs a stage. That was always a major part of the game. I know they aren’t doing it for season 3, but they NEED to do it for either DLC or a community fund for the 5 characters who won’t have a stage. I would seriously pay 30$ or WHATEVER they wanted. I don’t care about the price , I just think it really rewlly needs to happen.

If if if they got stages I think this is what they should get.
Mira - the roof of a castle overlooking a haunted Forrest
Rash - the first level of battletoads starting area
Gargos - a platform above the earth kindve like the master hand stage from smash bros. or his level remastered from ki2.

The number of stages is irrelevant.

If each stage up until this point was random, not affixed to a character and a music track I’d probably agree with you. However that’s not the case with KI, every stage has been tailor made for each character to fit with their theme and background, they’re a part of the character just as much as the moveset and cosmetics.

Giving people character specific stages for two years and then suddenly without warning deciding to take them away is a little outrageous. Especially given that the community has been clamoring for MORE stages over the years, retro stages and hidden sky stages have been one of the top requests from the community, so giving us LESS of what we want is understandably frustrating, isn’t it?

People are hungry for stages because they want consistency, something that KI has been lacking what with each season’s story mode being a completely different mode… They want the game to live up to the standard its already set for itself over the first two seasons, by cutting out character stages for 5/8 characters just makes the entire season feel unfinished if you ask me.