I’m totally surprised that after playing with Mira for a few minutes I fell in love with her! I think she may become my second next to Hisako.

She’s really fun to play as. I have to be more aware of her lifebar though and when to Embrace though.

Ok so the trailer is out and the stream is now done... How does Mira fight? What characters is she able to beat? How the heck do you beat a "bloody" vampire!?

Here’s something that may help you.

This is just an awesome image and I felt the need to share: 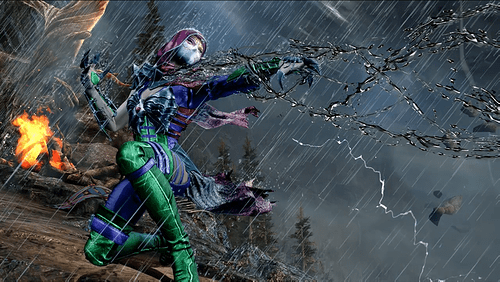 She truly is excellent. Prehaps my favourite in the game. Yes she’s that good. Only downside no stage. That would truly excel her

Is there a way to upgrade you season 3 package from combo breaker to ultimate i really want to play mira but at the time when s3 was released i only had $20 if not i just keep watting. (I know you can but i dont wanna pay full price since i already own the combo breaker pack.) I’ll just wait if not

Does any one have an answer to my earlier question?

Such an awesome image! I hope you don’t mind if I use it as my wallpaper! :3

That image isn’t mine, I snipped it from a yt video. But it does inspire me to snip a few of my own screen shots with my own costume choices.

I have to say though, that it is hilariously amazing to me that I like that pic as much as I do. Mira looks stellar in that rainy background.

She seems pretty awesome, though the health management thing is a little irksome. Feels like there should be more ways to regenerate health if practically everything reduces it.

I really enjoy the risk/reward style of play from her. I can see how she would be a bit difficult to manage as you can hang yourself pretty easily with her. I played some exhibition and found myself winning against Mira’s who kind of forgot that her health can disappear quite quickly.

I don’t like her, major disappointment. But I hope you enjoy her though, I’ll wait for the next 3 characters for now.

There isn’t an official way, but it can be possible to talk to MS Customer Support and explain what you want to do (upgrade), and then have them work with you to do it. It’s certainly possible (it’s how I upgraded my S1 combo breaker to ultra), but can depend on who you get on the support line.

Essentially, they’ll credit your account $20, and then tell you to purchase the ultra pack outright.

I’m loving her so far. While it’d be nice to have another move that isn’t a variation on embrace to help her regain health, the fact that there are essentially four versions of that move is quite a lot. Maybe if the animation in air were a bit different from one another?

I’m still trying to find more uses for mist form beyond getting out of hairy situations. I like it a lot, love that it’s in the game, but I hope that there’s more to do with it than what I’ve found in my severely limited time with her.

But yeah, those are my only complaints, if you can really call them that. She’s easily my favorite of the season so far and that’s quite a feat given how much I’ve enjoyed the characters so far.

I love the animations on her blood, love the scythe, love that she has a variation on Maya’s back HP, love the risk/reward style, love her cannon drill, embrace, the bats, the air dash (especially after throwing bats), the shadow bats, her intro… I can’t wait to learn more about her in Shadow Lords. I can already see her being in my team right there with the dog and mah soup.

She really is great. I like that she is fragile like a vampire and she straggles to stay alive drinking blood.i like her moves, her jump,her waking up is great.my only question is about that liquid material she uses.i dont know what it is

Obvious it was meant to be blood but it’s a t rated game.

It wasn’t “obvious” to me what the heck it was…Lol. Blood needs to be red. Sorry. The teen rating has done nothing positive for this game. Just handcuffed it in certain aspects (and no, I don’t want MKX level violence FYI).

I’m just waiting for Gargos, I’ll stick to solo to level Mira for the achievements and unlocks.

The rating system has to do with the color? They could say it is sanguine juice

… it is only a liquid… come on rating people…