Frame advantage for all characters after a combo breaker

Based on a discussion in another thread, I computed the frame advantage for every character after a (ground) combo breaker. The patch notes from S3 suggested that the range should be “between -1 and +2”. These numbers are listed from the breaker’s perspective (a positive number means the person doing the breaking recovers first).

It’s actually surprisingly accurate, but there are two clear outliers here, Rash is a huge +9 when he combo breaks (although he is sent pretty far away so he won’t be making you block a normal), and Wulf is -7 when he breaks. Arbiter being +4 makes a bit of sense, since his normals are considerably slower than others.

I’m guessing all patches are done for KI, but if the devs are seeing this and there are more patches to come in the future, I would recommend taking a look at Rash/Wulf at the very least, and maybe bumping those who are below 0 up to at least 0.

Even if nothing changes, this is information the community can use to plan for their matchups.

(Keep in mind that characters are invincible until they land from a breaker, which means -7 cannot be punished, but Wulf might have to block something depending on range or else backdash)

Infil with nothing better to do is a beautiful thing -Kreygasm-

Question. Can’t this get stickied somewhere?

Actually, I’m theoretically wrong on that above point, Wulf when he breaks is -7 but he is not the one flipping out, which means in theory he should be straight up -7, grounded, from a break and the person landing “should” be able to punish with a 7 frame move that reaches.

Wulf’s break distance is actually surprisingly short but it’s out of range of the fastest < 7 frame moves I could find (namely, Wulf shadow ragged edge and Thunder shadow grab). Fulgore’s hype beam is 6 and Tusk’s shadow sword is 7, and those both will reach, but Wulf is able to block no matter how close to reversal I’ve been able to do it. So maybe there is a special “can cancel combo breaker recovery into block” code in the game or something, or maybe I’m just not inputting them fast enough. Either way, it’s either impossible or extremely difficult to punish this, so I doubt you’ll ever see it happen.

And I assume you tested corner a bit? Just to confirm that Wulf can’t break, and then be jab punished or anything?

Turns out Wulf is fully invincible until he’s able to block. 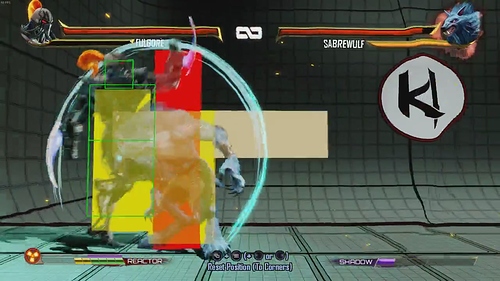 How the skull does Rash get more R.Frames?!

I knew it, life is hard

PS: Thanks for taking the job of doing this!

Can he only block though? I know I’ve done Shadow Influence multiple times after being combo broken by Wulf and I’ve gotten the “punishment” popup

He doesn’t have a blue throw box in that screenshot either, so no, he can’t be thrown while recovering (so long as the box retains those properties throughout the recovery).

The punishment display is pretty often glitched to display when you catch someone who is attacking, so I wouldn’t really trust it. No, Wulf can’t be thrown or hit until he is able to avoid those things via jumping/blocking like normal. You can pretend he is knocked down while recovering from a combo breaker.

Ok so Im notciing that Riptor has some major advantage after regular combo breakers agaisnt Omen. He is able to dash straight in with “Head dash” super wuick and it has armor? WTF?

HALP!!
If he is +1, then what can I do to combat him dashing in? Besides blocking? I really dont want to have to hold a black string that soon out of my breaker?

Jump back and air dash forward on reaction to him headbutting in, and hit him with a jump normal.

I don’t feel her special is that fast.Maybe Omen can find ways around it. Can’t lab it right now but if I remember I’ll check it out.
It does give me troubles too,but that’s because my character struggles after a combo breaker. Riptor can be pretty annoying regarding that just because of her pressure. Still, she’s not the only one.