I’ve done at least 15 entire runs of the mode and while the Omens dropped all the Gargos dossiers (for some reason), I still haven’t gotten ANYTHING for Omen. Am I just unlucky?

I’ve only ever had two Omen Dossiers appear, both after the Eyedol patch. Maybe they’re slightly more likely to drop during quest-related Omen fights than the normal type?

Quest related as in the missions specifically for him?

I mean missions that appear as part of character-specific quests. Like, I know Omen himself has a quest where he fights two other Omens. It’s possible something like that would produce better results.

Right, I know he has that one and Puppeteer where he fights Gargos. Guess I’ll be keeping him on my team in future runs, thanks for the idea.

Dossiers just seem to take forever to drop in general. I’m nearing 100% completion, and have played through more times than I could count, and am still missing about half of Orchid and TJ’s.

Yeah, I get wanting to stretch out the rewards for people playing over and over, but I’m about six playthroughs in, all of which have gone 25 turns or more, I’m currently on about turn 35 and I hardly feel like I have anything as far as dossiers go lol.

Only 25 turns a play through you’re gonna have to step your game up my last play through with Kilgore I made it last for 63 turns before I said f*ck it and skipped to gargos. I ended up getting 12 or so dossiers. I also found it easier to get dossiers by fighting the same mimic, orchid for example with multiple different characters in each play through.

Pretty sure you get Omen dossiers by beating Omens. It just takes time. I’ve got all of them, if I remember right (kinda far from home, can’t check). But I’ve also done over 100 runs on various difficulties (at least enough to unlock all the Pre-Eyedol mimics).

Only 25 turns a play through you’re gonna have to step your game up my last play through with Kilgore I made it last for 63 turns before I said f*ck it and skipped to gargos. I ended up getting 12 or so dossiers. I also found it easier to get dossiers by fighting the same mimic, orchid for example with multiple different characters in each play through.

I know, right?! I just get impatient and want to skip to the end fight haha.

25 might be a little low in my estimation, but it’s usually around the time where I start to get antsy for the final showdown.

That’s what i did for the mimic skins whenever I didn’t have the one guys finger, now I’ll delay it for a while to level up characters since contrary to what people might believe gargos does not offer much in the ways of xp… what a douche lol

That cracked me up.

Outside of Kilgore, I have all of my characters up to level 50. Still need a vast majority of the mimic skins and dossiers though.

I’m the opposite, outside of Kilgore I have all mimic skins but only have about half the cast at lvl50.
Yeah he’s a douche, you can’t put people through portals, summon 2 minions at the same time, have unbalanced cheap moves and an insane number of buffs on challenging or godlike without giving them a sizable XP boost but he does it anyway because he’s a douche.

Thank you for the posts. I thought i was alone in feeling the Xp was not worth it. 2 Omen fights get you just as much, if not more if a skeleton chest drops. The real sad part if there is only about 200 Xp difference between easy and godlike. Although there is a big difference in the amount of items you will use in each setting.

No problem I just find it funny that at a certain point the mimics yield more rewards than gargos does and at times will be even more difficult to fight. Idk ever since they toned down gargos I feel like the reward for beating him isn’t even worth it, not saying that he isn’t fun or difficult to fight but it’s kind of disheartening. They could alleviate this by making his fight yield 2x, 2.5x, and 3x XP boost respectively depending on your difficulty or increasing the amount of astral gems for beating him I think on normal right now at most you get 200-300.

I think the Xp boost should be for all fights in each difficulty level. Like you said 2x for challenging, and 3x for godlike.

Meh I think that would negate XP boosters though since all you need to do is play SL at that point which is why I recommend that the bosses i.e. Omen and gargos get the XP boost.

I’d planned on posting some personal stats when i “effectively” got all the dossiers. I say effectively because we can’t get the Kilgore dossiers or the owl guardian dossiers until they’re released.

I’m at 93% after dozens of hours put into shadow lords. I need TJ, Aria, Sabrewulf, Omen, Kilgore, and Kan Ra dossiers, owl dossiers, and the mask of the ancients.

I’m utterly convinced that Omen dossiers are not dropping correctly for me. I’ve got all mimic skins and achieved the vast majority of them via Gargos runs, so only sitting on 2 omen dossiers is infuriating. Picked one up almost immediately when shadow lords came out. Picked up the second right after the Eyedol SL update.

I’ve been considering recently about how a lot of people were a bit upset at the shadow point price of Shadow skins. I thought they were high too, but then again i figured they were priced at such an amount that we’d really sit and consider using gold instead of grinding for dozens of hours. I feel like more than 100 hours to achieve text story content in the form of dossiers is wayyyy too much. It’s like in a totally different vein from the thought process put into shadow skins. I only relate the two because they are probably the most similar in game items to grind to completion as far as time investment.

I can confirm this. It actually dropped for me and it was my last one. 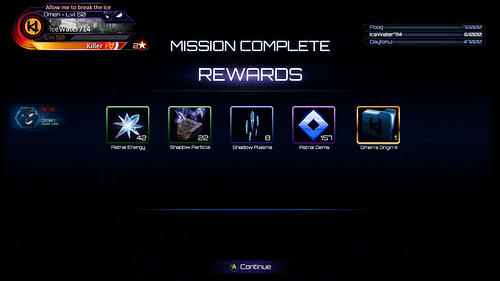 When I say Xp boost. I meant the gems that you get, and not character xp. I guess I should have typed that better.

The gem rewards between the difficulties is really bad. There is only 150 gem difference between easy mode and godlike. The skill needed is way beyond the difference of 150 gems