I see Sadira siding with Gargos. So what if KI replaced her with a new female with a blonde one? A new Ultratech agent to side with ARIA.

Plus with Street Fighter having Shadoloo dolls, would KI’s Ultratech do the same?

if they had the rights to the comic book characters…there is already one ready and waiting!!!

I’ve actually bean thinking bout that. Really, that character was so one dimensional, all they would need to do if flesh it out and change the name and you’ve got her.

Who are we talking about here,…and pictures please 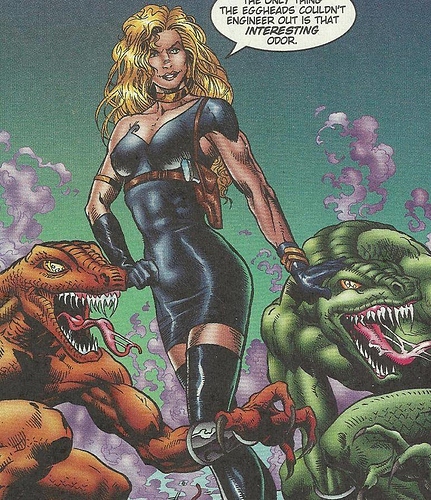 Her and Orchid have a big fight at the end of one of the comics… Kara beats the crap out of orchid, and Orchid comes back with Firecat anger…it ends in a tie basically from what I remember. I have all the comics at home…Ill have to read it again. But Kara was the right hand woman to “the BIG BOSS”… basically ARIA in our current Story.

Well, in that case… Yeah, I’d like to see this character in season 3. I think that’d be awesome. Sure, she’d need some de-ninetiesification, though that would be a cool retro, but yeah, an actual Ultratech assassin that’s more of a foil for Orchid would be pretty awesome.

Personally, I don’t see Sadira as Orchid’s rival at all. If anything, I see her main rival (now, at least), as being ARIA and Ultratech. I see her as more of a wild card, which I think is great to have in this game, since a lot of characters seem to fall in to either the heroes camp or the Ultratech camp. Nothing wrong with that, of course, but still nice to see Sadira being more out for herself.

So yeah, Definitely on board with Kara being a full-fledged character in season 3. Hope it happens!

Or do their own take on her. They may not have the rights to the comic book, doesn’t stop them from doing an “homage” or imitation with their own spin on it. She could be pretty cool.

The blonde female can be an Ultratech agent with amnesia.

Perhaps she’ll be based on Resident Evil movie’s Alice as well. (updated)

What if Ultratech used Orchid’s DNA to create a blonde clone of her? Since Kitana & Mileena.

I forgot to add Crimson Viper!

Can a blonde be a succubus then? Like Morrigan & Lillith?

I think the point of Ultra Tech is to hire mercenaries not monsters. They tend to piss off monsters more than make them friends, so Ultra Tech being friendly with Vampires wouldn’t be lore friendly, especially since Aria is trying to save humanity while Vampires see humans as food.

But how to make a blonde fighter exist in KI? Cause an agent like Cammy/Decapre can fit in after Sadira leaves. Ultratech could use a new female to serve ARIA.

Shadoloo had the dolls, so what if Ultratech created mutants (X-Men style), turning orphan children in soldiers/assassins. Even though Ultratech got Fulgore robots & dino-stalking Riptors. That includes Cinder who is an alien-human hybrid.

Yeah but Cinder was a Mercenary and volunteered to get his DNA spliced.

Introduce the Blonde agent like Cinder and Sadira, she was found and hired by Ultra Tech. She doesn’t have to be a monster, she can just be super human like TJ, Sadira, Jago, Orchid, and Maya. She has special abilities like those others.

She could have martial arts skills, but seeing as how she has a gun am guessing she has some military training. Maybe she was part of Orchids Disavowed militia and is actually a double agent working for Ultra Tech.