Ok we all know Aganos is garbage and he is clearly unplayable in his current state, so I suggest a few bugs that would make him a fair character.

What do you guys think!? Wouldn’t Aganos be a totally fair character with all these buffs?

(I hope somebody gets the joke, also this isn’t geared towards anyone in particular)

LOL If this was Real, then Everyone would be like this when Aganos comes up…

Yeah, okay, so the stone-cold killer gets… Stonier? No, that doesn’t sound right… Oh well.

That wasn’t bad. In fact, I can honestly say that really "ROCK"ed…lol

The only thing I would change is that the wall ender should automatically launch the opponent through the walls after cashing out and with unscaled damage. It’s only fair. 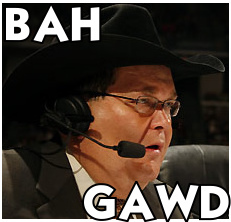 I know right? Aganos has the worst combo damage in the game, so it only makes sense for him to get a damage buff. Considering you’re always on defence, it’s harder for Aganos to open up the opponent than any other character in the game, so he should be rewarded more! Thunder would still do more damage IMO

Just one more low attack would be nice…

I know right? Aganos has the worst combo damage in the game, so it only makes sense for him to get a damage buff.

Aganos has a 2-hit unbreakable 32% damage, wall-crash combo. So, no, he doesn’t need it…

For my part, I played a little bit with Aganos last weekend and took him from abound level 26 to level 37, so I’m by NO MEANS an expert on him (or any other characters for that matter).

But in my opinion, I feel like I have a harder time using him because of how slow he is. When he’s all chunked up, he’s moving in molasses, but even when he’s not, it feels like I’m trying to work around how he moves while my opponent is running circles around me.

I know that this is by design given his reach and how dangerous he is when chunked up, but would it help him at all if he were simply able to get around a little more quickly? I’m not trying to homogenize with the rest of the characters. I like that he’s different; the big tank of the cast. But if his walk speed were a little better, if some how his moves came out a little faster… Maybe that makes him more threatening?

I’m not asserting that, I’m asking. Could there be a balance between his current speed and the speed of many other characters and would upping his game in this regard be too much of a buff, or would it really even make a big difference? Just curious what people think.

Spar with me sometime, and I’ll show you why Aganos works just fine as is. As for his chunks, if you want to move faster, just use 1, 2, or no chunks. You can chunk up and do what I do - use them for walls or payload assault.

After my thrashing by a top 32 player last night, I’m having 2nd thoughts… :’(

How do you know I don’t know my man?

did i say u dont know? i said u guys to the people who complain about him BUFF AGANOS BUFF AGANOS…he is so OP atm that he actually needs a nerf no buff and if ur a aganos player that knows what aganos is capable of then u would agree

I’m starting to think not a lot of people are getting the joke I was making as the original post of this thread.

Aganos, as far as I’m concerned, is balanced. He hits a lot of extremes, but he is. He’s incredibly large, easy to hit, easy to throw, is incredibly slow (and can even get slower), has very few options for low attacks (d+HK, d+HP w/peacekeeper, and can’t dash to save his skin (that is to say, if he had any). He’s got reach, armor, anti-projectile projectiles, a really mean finger, plenty of hard-knockdown and wall-splat opportunities, and corners that come out of nowhere. He reaches the bounds of being both broken (too buffed) and well, broken (too nerfed). That’s what makes him such an intriguing character to play. Aside from a few bugs that STILL need to be addressed with him, I think he’s rather rock-solid ATM.

No i don’t actually i stopped reading after i noticed the part that he is garbage, i just don’t want him to be buffed.
I’ve spend enough time with laggy sabrewulfs,anjoying kan-ras and spammy underrated riptors.
Fact is alot ranked players can’t use aganos correct so im kinda fine how he is but would appreciate few bugs to be fixed.

Aganos unplayable? Lol you’re crazy! If only you’ve seen how many good aganos’s have kicked my *ss. XD