Hey everyone, it’s been a minute since the tremendously big update that rolled out Shadow Lords in September. We can’t give you an exact date on when we’re going to reveal big stuff, and when that will roll out – we’re still working on a bunch of stuff. Yes – a BUNCH. Like A LOT. It’ll be weeks, not months. It’ll be before Thanksgiving, not after. It’ll be after Halloween, not before. Blah, blah – you get the idea. But before we dive into a few details, let’s get an important word from Adam Heart, our Lead Combat Designer and new Orlando man.

Adam Heart: Hey, Killers. We know things have been quiet for a while (other than these alleged emails from ‘Spinal’ demanding Halloween buffs), so we wanted to give you a quick update. The combat team is always watching and studying how you guys interact with and feel about Killer Instinct. Balance is an ongoing goal of ours, though it isn’t just achieved through how characters interact directly. Tuning risk vs reward factors within the game’s systems can be just as important! Keep your eyes out for a survey regarding this that we’d love for you to take a few minutes of your time on to give us some risk and reward feedback. The questions are simple, but they’ll help the combat team make a few key decisions about the future of KI. As always, we want to thank you for taking this wild ride with us and helping us make KI what it is today. Fight on!

CLEAN UP ON AISLE 5…

We sure do like our surveys, don’t we? Who’s to say when we might put something in there and then magically it happens weeks later? (Cough, Eyedol, cough!). While we’re speakin’ combat, I do want to specifically make sure that you can rest easy: All input bugs will be fixed in this update, we promise. We got as many as we could as fast as we could. Some are harder than others. Sorry for the mess!

Kraig: So back to all the new stuff – how about a little proof of life, eh? Glad you asked. Below is an image of Guardian #6, the Watcher, whose name you’ve astutely noticed in the Guardian Lab. Here’s a first look at the guy while he does his thing. I’m not going to say what he does, but the UI probably gives you a good clue! And he’s not the only one coming in 3.5. 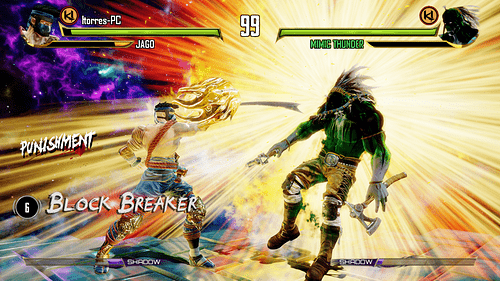 Much, much more to come. Keep checking the Emporium weekly – you never know when a new item or sale might pop-up (hint: they usually happen around the weekends!)

Shadow Lords has been a big hit! We’ve been watching everyone playing and it’s amazing to see how your strategies have changed over time. As such, 3.5 will bring Shadow Lords enhancements, content additions, and tuning galore! Here’s a few eye-popping numbers about the mode:

Now, we’ve already mentioned the Eyedol Quests in a separate stream (you’ll have to do something special to find them!). Another new feature we’re rolling out is improved In-Game Leaderboard functionality that shows your score vs other players! Now you won’t have to wait until the end of the game to see who you can leapfrog. It seems like a small thing, but we think it’ll pay off big by helping you know when to take more risky missions vs not. Nice quality-of-life addition.

PSA: WIN 10 PLAYERS - GET YOUR ANNIVERSARY ON!

Most of you probably know this, but if you’re playing on PC you MUST update to Windows 10 Anniversary Edition. Here’s a handy post that shows you how:

HEADS UP, KI players on Windows 10!   Starting with the November Update (which as of writing this still does not have an official release date), KI on Windows 10 PC will require the Windows Anniversary Update to properly function.   In...

It’s weird. I don’t know how we ended up with Shadow Meter, Shadow Lab, Shadow Lords, and Shadows, but we did. Shadows are big part of what KI is now. So do you really think we would stop there? What else do Shadows really need? You’d almost think that they would need something visual. Something punchy that makes them stick out. After all, they’re certainly at least as important as Mimics, aren’t they? Hmmmmmmm.

Something to think about.

Thanks Kraig. Can’t wait for the next thing we get! And before Thanksgiving?

love seeing the textual stream back up and running

thanks for the info

I’m calling it right now; we’re going to get some sort of Costume based on Shadows, similar to the Mimic skins. Maybe even tied to the number of fights your Shadow has recorded, has fought, or the number of enemy Shadows you’ve beaten?

Thanks for taking the time to write up this little update, @BlitzedKraig!

Thanks for the update.

I’m a little sad to see that the anniversary update will be required for KI soon. The update is still very broken for many PC users, and I’m extremely hesitant to update until MS fixes several of the key problems (especially regarding how controllers connect for games). The update has destroyed several of my friends computers, and a quick search on twitter shows lots of problems about it. Are there any features KI is implementing that 100% require the anniversary update features? Is there any way you could postpone having this requirement for a bit longer?

Hope to hear more about the new additions to the game soon.

After all, they’re certainly at least as important as Mimics, aren’t they? Hmmmmmm

Shadow skins confirmed (similar to what we see in shadow lab achievements, somewhat like Shago)

I’m concerned with some of the questions regarding game mechanics. For example, I think combo breakers are fine as is and so I worry that with this poll, they may make it too easy or too hard.

looking forward to the update

Thanks again guys for the hard work you put into the game, and look forward to the update.

Shorter survey than I was expecting, honestly. Still curious about the results from the last survey…

On the topic of white life: I put down that I think it drains somewhat too fast, and builds somewhat too slow, but I was to clarify that because I’m talking about very specific things.

I think that white life drains too fast on knockdowns. I think throw resets or other resets mid combo that knock down should be a little more rewarding, but due to white life draining when the opponent’s on the floor, you’ll likely not get a chance to make use of the PD you built up before the reset.

I think that white life builds too slowly for some characters, due to issues with damage scaling. There’s a handful of characters that have combo scaling applied to their linkers per hit rather than per linker, which makes heavy linkers kill combo damage. Also, for kan-ra, I think too many of his tools result in a combo that’s so heavily scaled that he can’t reach higher ender levels at all unless he spends meter.

Also to follow up on what infil said, when I updated to anniversary my computer crapped out to the point that I had to do a clean windows install. It also temporarily broke dualshock 4 compatibility. HOWEVER, I haven’t had anniversary-related issues since then, so…I dunno, silver lining I guess. “My house burned down, but at least I didn’t burn down.”

The combat team will be reading.

Been a while since we’ve seen you post, but I see you creepin in the likes.

Thanks for doing your thing, keits.

You’d almost think that they would need something visual

Can this replace the mimics? Something like the mimics being a failure on aid Gargos with his invasion and the Omens has mastered this technique and now all mimics are replaced by shadow mimics.

Yep. Make Omen mimic everyone else.

Really excited to see what all’s in store!!

I hope its Shago & Omen accessories.

I hope they do more holiday-related stuff. A Composite Santa Eyedol (half Santa half Frosty) would be epic, as would a retro Spinal color that made him look like he was made out of candy canes. Also a ginger-bread colored Kan-ra with a white sand effect to make it look like sugar.