Your Greatest Triumphs, Biggest Failures, and Most Humiliating Moments

The subject of this thread is in the title; I thought it’d be a good idea to have an all-encompassing thread regarding “The Big 3” as it were. Feel free to tell us about your personal bests, your lowest worsts, or even those things that are so embarrassing you may actually be too afraid to tell us about it - as long as it’s related to Killer Instinct (in-game, out-of-game - it doesn’t matter!). Feel free to share with words, screenshots, or clips.

Since I started this thread, I guess I’ll start.

I didn’t know exactly how I was going to spend my Labor Day, but I inadvertently used a good portion of my holiday evening playing KI’s ranked leagues, which is something I don’t do too often. Despite this, I had 2 great moments and 1 bad moment that I’d like to share with you in screenshot form. 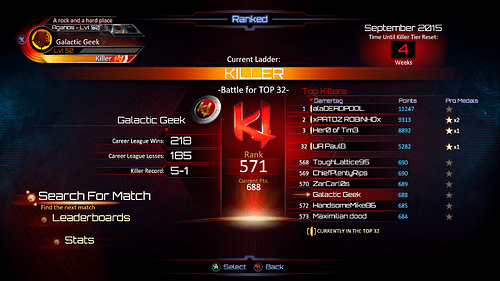 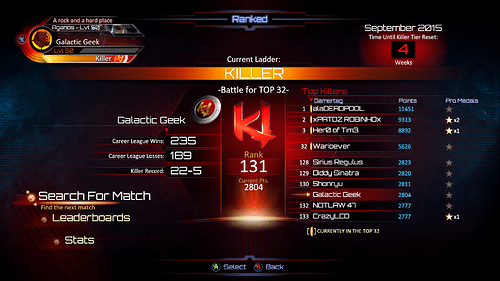 However, as ecstatic as I was to see this, I’m also a realist - there still 4 more weeks to go in this season of ranked matches. Still, it’s a personal proud moment for me regardless of what anyone says.

Unfortunately, my evening wasn’t perfect, as it ended on a pretty sour note - I happened to run into 1 of the best players around - CStyles! Normally, you’d think this would be a great experience, and IMO, it would’ve been, with the operative word being “would’ve” - if it had actually happened at all. CStyles was at my fingertips, so much so, I could actually speak to him - and he could actually hear me! And without a single word… He quit. One of the best players in KI and the moment he sees me, he QUITS!!! This hurt me more than any loss I could’ve suffered because in doing so, he robbed me of my opportunity. The worst part is simply not even knowing why. CStyles, I want you to know that you disappointed me this evening - I looked to you for inspiration, and it turns out that, in the end, you’re just a quitter. :’( 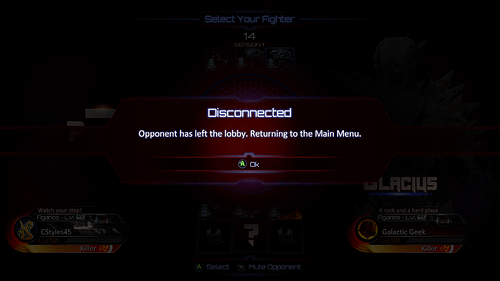 Not sure if trolling or not…

If that is the first time that a disconnect has happened to you prior to the match starting then you must have the single luckiest connection when it comes to online gaming.

It was a disconnect. Simple as that. No, I didn’t quit out before the match started. What incentive would I have in doing that?

Most Epic Win: I have a few contenders for this one.
a)Getting all my characters to level 50
b)Finally getting all of Sabrewulf’s colors and gear in Season 1. THAT was brutal for a newbie like me.
c)Finally climbing out of Bronze League into the Silver tier in S2 Rank

Most Miserable Failure: This one is a little less ambiguous. Both are from attempts at Shadow Jago.
a)Almost there, using Thunder. just have to Ultra Spinal and I’m golden. I’m playing well, sister on the phone with dad. Here’s how the conversation went.
Sister:“Oh, Matt’s doing something that’s suppose to be really hard"
Me in the other room: “F*CK"
Dad:” I can tell”

Though the really big one…
I actually made it, once. I was using Sadira, getting pretty close, get burned out a bit. Decide I’ll switch characters… See, I was thinking I’d go right back to Shago, since I’d been playing the old games on XBLA. Instead, I had to start all over. Haven’t attempted since.

Most Embarrassing Humiliation:
By far my worst moment…
Finally get into a KI lobby with Mike Robles, decide to show of my main Wulf skills against the lead Orchid in the lobby. Must’ve inferred by my username that I play Wulf, since king of the lobby counter picked with Kan-Ra after 6-7 Orchid matches.
Try not to panic. I try my best, get him down to 30%…
And then I choked. On stream. In front of about 700-1000 people. Including Mike Senpai.
I haven’t used Wulf online since… In the few dozen times I’ve been online, anyway.

*IMO, the game really does need to say “disconnected” rather than “opponent has left the lobby” - but that’s another topic for another day…

Biggest triumph: Having a 132-9 win loss ratio last month.
Biggest Failure: Losing my Evo match because I tried to style on stream.
No really humiliating moments to think of.

I tend not to dwell on my victories. Although I did end up on one of Max’s “Week of Thunder” videos when the game first came out. He beat me, but I put up a good effort for a while. Brush with greatness moment, I suppose.

This weekend I had one failure and one humiliation. First, I lost a battle against an Orchid shadow by the magic pixel. I should have won too, I just got locked out and that was it.

The humiliation was I got matched up with a guy in exhibition and accidentally hit B on my fightstick instead of A and dropped the match. So, whoever you were, sorry dude.

I had another solid evening of ranked matchmaking in Killer Instinct. I’m now officially #101 on the leaderboards, which even if it’s temporary, is something I can always brag about.

Also, I’m officially ahead of 2 other great forum community members, as shown in the image below. 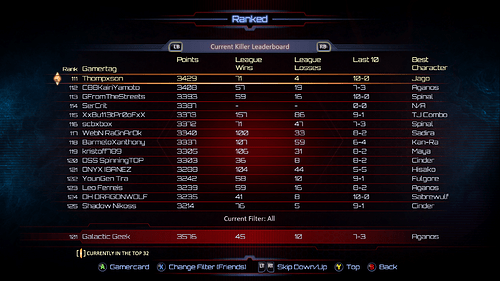 Actually GG is known for having several disconnect from his connection…and has admitted so several times.

GG…not sure why you would say he quit if you weren’t sure if that were true.

Just seems like that info could have been left anonymous and still tell the story without names??

Primarily because most of my disconnects happen mid-match, almost never right at the start…

Best: Making it past a couple of my friends on ranked! (Somewhere around 250-300)

Worst: Nearly beating one of the best Jagos in Ranked, Hot Trash Man, and choked

Embarrassing: Getting Rekt by Paul B and Boss Wulf, One right after another and both Taunting due to perfects…WULFS. (lol They deserved it though. Good Players!)

Best: Winning my first match @ CEO on-stream with @TheKeits and Geoff the Hero commentating. (Unfortunately I have no idea what was being said; the only archive I can find of the match has heavily subdued stream volume and a gentleman speaking over the whole match in French)

Worst: Getting eliminated @ CEO by ItzSpammy because I didn’t adapt.

Most Embarrasing: Getting mauled and sent to losers on the same stream by one of the UA boys, not only because they outplayed me but also because I didn’t know the matchup.

Man I forgot about that! I looked for it the day after it happened and I couldn’t find it. there were too many matches and different streams to go through. DO you have a link?

Yes, yessir I do!

Part 2/3 (contains my arse getting handed to me)

Best: scoring a perfect against a Top 32 player. Guy was kind of a ■■■■, so was doubly satisfying

Worst: winding up on one of Max’s early KI videos in a “what not to do” video. That was super embarrassing :-p Max was super cool about it though - he blacked out my name and we messaged back and forth laughing about it.

Humiliating: every time I’ve ever been hit with a demonic despair command grab. It’s embarrassing as heck every time it happens, and all I can do is laugh in shame

-Came in the top 500, feel like it being near the end of the month makes it a more noteworthy accomplishment since you’re up against people who’ve really been playing.

-Scored a clutch victory off a tea bagging Saberwulf who was talking trash on his mic.

-I don’t know how many times I’ve gotten absolutely rekt, but everyone of those times felt embarrassing. I don’t mind losing, but I at least like to be able to say I put up a decent fight.

-Got countered by Hisako every time in a match, this is when Hisako was a new character so I didn’t know what the hell was going on or how I was getting countered, but I’ve now got the match-up down.

Well, I officially achieved a new best, as my evenings of KI in ranked league seems to be paying off this month. My previous best rank of 101 dropped to 123 since I had to, you know, go to work today and all that, but after a solid evening of some incredibly fun matches, a few drops, and even fewer losses, I brought my rank back up to the #95 spot (I’d post a screenshot I took as proof, but I’m still on my XB1 and can’t copy/paste using the IE app, so I’ll post it on here later for you to see) so far with a total of 63 wins and only 13 losses - and I’ve done all of this with everyone’s favorite golem!

1 thing I did notice that was odd on the leaderboards though is that C88 WarMachine was listed just above the 100 slot, but had a “-” on his wins and losses, and his best character was listed as “N/A” - why was that? Is he hiding something?

Keep it up galactic you can make top 32 I’m sure of it. Aganos ftw.

Keep it up galactic you can make top 32 I’m sure of it. Aganos ftw.

Even if I do accomplish it, I admit, with my generally poor connection speeds, I’d hate to participate in the top 32 tournament only to consistently drop - that would be embarrassing! Oh, look, another tie-in to the thread topic - how nice…

There’s also the matter of responsibilities in my everyday life - I have a lot of coursework I’m falling behind on with a dealine looming ever nearer, so to dedicate more time to KI, while fun and exciting, is something I really shouldn’t be doing…