I know this is a different department, but I wonder if anyone can provide insight on when TE2 drivers might be available for Windows 10. I know it’s supposed to be coming, but it would be nice to know the date…

I’m going to unapologetically tag people for this, but I promise I will only ask the once. Any ideas @TempusChaoti, @rukizzel ?

@DeathBlooms2K8: It’s not just Madcatz, though. Razer Atrox has the same issue.

@BigBadAndy - the issue isn’t really with the KI team, but with MS. They are aware of the issue because it’s been raised a lot of times on the Xbox pages. Unfortunately, I have not seen any sort of official comment on this; everything was heresay and hope (that the March KI and Xbox Games on Windows 10 release would warrant a driver update).

Great idea. Done. I’d still love to hear from MS. Like I said, I know it’s another dept. but since KI is THE Xbox fighting game it would be nice to know they are keeping an eye on it.

It’s doubly frustrating because I can play on my PC with my 360 stick, but I can’t use it when I stream Xbox One games (because that only works with a “regular” Xbox One controller). So right now, I have to use a cheat stick (Titan One in my case) to use my Xbox One fightstick to play Xbox One games. And I honestly don’t know if they will fix that with the Win 10 drivers.

Well, here is the Twitter reply I got from Markman:

“@Jamesdad76 @MadCatz we don’t make the drivers for the Xbox One FightSticks. The update will need to be made by @Xbox / MS.”

So madcatz is a dead end.

Yeah, the Xbox One fightstick not working with Windows 10 is ridiculous…I’m super upset that this hasn’t been addressed, and that no one is even willing to comment on it. I’m just hoping they get it worked out before KI’s PC release - it would be a tremendous failure to finally release KI on the PC, only to have the OFFICIAL One fightstick not work with it >.<

I mean, I’m a guy who doesn’t like to complain. But you start to feel like you are getting screwed for actually adopting the system and buying the licensed equipment. I have three 360 sticks that already work on PC (don’t ask why) but in order to use them when I stream KI to PC from my xbox I have to use a cheat stick. This is a big hassle. I went ahead and picked up the $$$ Xbox One stick because - hey that’s how these things go. And its the least versatile stick in my collection…

I honestly don’t know why it’s not treated as a standard controller - but no one will answer that question either. Very frustrating.

Hmmm, I assume MS is working on the drivers for the March release, but I certainly would be sad (and surprised) if that’s not the case. I just dropped $1.2k on a whole new computer this morning to prepare for KI S3, and possibly SF5.

Any insight is appreciated.

I really hope so too. But honestly, I would have thought we would have had PC drivers long ago. I have posted the question before, tweeted, and I haven’t heard anything from anyone at MS about it. No one will provide any sort of answer at all (even an unbelievable one) as to why the Fightstick isn’t recognized by Xbox 1 as a standard controller (which would have not only avoided this problem but also allowed you to use the stick for other Xbox One games). It doesn’t seem unreasonable to want to know these things but no one from MadCatz will say anything and no one from MS will say anything…

They did. I don’t find it particularly believable that they don’t have conversations with MS about whether/if/when drivers will be released for their product.

Also, if you recall, when DoA 5 Ultimate had controller compatability issues, the MS folks said “talk to the game developer.” Madcatz and Razer (for the Atrox stick) were the ones saying “We are working with Tecmo and Team Ninja to set this right.” So the idea that they are just a third party manufacturer for something MS is responsible for is not entirely true.

If they all just came out and said “we aren’t doing this. Your stick will never work on anything other than Xbox One. We made it different than a regular controller because reasons” I would just move along. But it’s frustrating to not be able to get any sort of explanation for something like this.

Edit: Cheer me up with the details on your new PC. I built a gaming rig last year, and I loved building it more than I have loved playing on it since. I’m actually thinking about making another one for fun, and because you can always build a better PC…

I built it this morning on CyberPowerPC.com
The actual link to my build is no longer active, but I got: 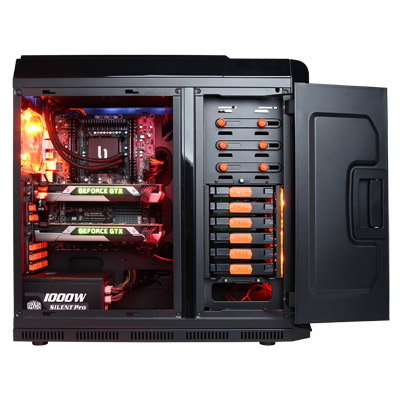 This should be able to provide a nice gaming experience, right?

Nice. That should do the trick. I’m not as familiar with the Radeon cards but I put together a i5 4690k with a relatively modest GTX 750. It runs everything I try to run, although I’ve really only had good performance in the SFV beta at 900 p. I’ll be interested to see what KI requires.

But looking at your build I think you are going to be in good shape.

This should be able to provide a nice gaming experience, right?

Yeah, you’ll be more than fine with those specs.

if you want to bring the temps down in the room this PC will use plus give you the option to overclock it, i recommend a beginner level CPU water cooler like the corsair H60. its cheap, easy to install, and works quite well. ive had one for about 5 years and my CPU gets temps less than 40 celcius at max load on witcher 3 with ultra settings. i have my i7 2600k overclocked to 4.2ghz. you dont have to worry about refilling the coolant within it either since it is hermetic. there are advanced level ones that do better, but leave that for another time when you’re feeling gutsy as those require a more elaborate set up and install time.

They may have everyone waiting until March when official support drops during the release of KI on the PC. I have the official KI Arcade fightstick from Madcatz as well as an Xbox One Hitbox Arcade controller. Either way we’ll know in a few months.

I’ve heard some of the fight sticks are working on Windows 10 when plugged into a USB 3.0 port. Does anyone else have any updated news? Street Fighter comes out in a week and I still have no idea if I’m going to be forced to use a pad…

I will try when I get home tonight. It has never worked before…

From your mouth to God’s ear…hope that works bro :-/

@KrizmKazm @BigBadAndy @STORM179 Sorry guys, it’s just random gossip. I just tried this in Rising Thunder and Ultra Street Fighter IV and no luck, same as always. The stick is powered, but nothing works, even with the Win 8 drivers manually installed (which WIn10 is supposed to have included anyway). So in fact even worse that before, where only the two buttons didn’t work.