Why wasn't this in K.I 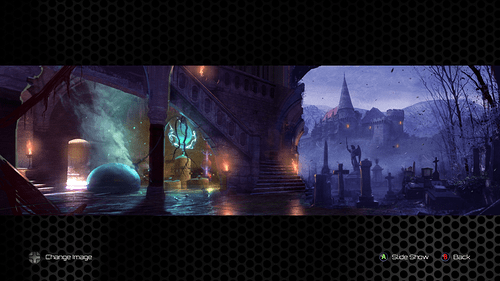 Why wasn’t this in the game? It look’s Hella cool. Please I.G turn this concept into a new stage. We really need more stage’s

I’m assuming this was going to be Mira’s stage.

But it can work as Mira’s stage

I agree Completely. It sure can.

Also is it me, or does the castle in the background remind you of the castle shown in the opening of “Scooby Doo Where are You”?

Adam Isgreen mentioned at one time that Mira’s stage, if she had one, would be the vampire coven lair, and it was going to have a classical design ( probably look like it was ripped out of Castlevania) but then it would have more modern decorations in it as well, like as if it were lived in. It would definitely fit her music, since it’s half Russian opera & half dubstep.

Ha I had the definitive edition playing the slideshow of stages and got really excited when I saw this thinking it was a tease for an upcoming stage. Turns out it’s just sabrewulfs stage, probably from a different angle. Looks cool though. Would love to see that in the game as it’s own thing,

Dude, that’s awesome! If this could be added in the future, I’d be super stoked!

This art is on the DE, right?

Why wasn’t this in the game?

I don’t care who’s stage it is I really like it!

The telling thing was the caskets

Imagine th ultra some of the caskets and ghouls/ vampires descend the stairway!!!

You know, after looking real closely at Saberwulf’s stage, I think that image is mostly just the background behind the big table-thing on the left side of his stage…somewhat modified of course.

Wow that does look amazing! I would love to see it get made into a real stage one day!

This is the outside view of the Von Sabrewulf property…also known as Ravensburg. In the KI fan book there are several versions of all the S1 stages… and they all changed to what we see in game now. A lot of the accessories were different too.
Thunder had a Polar Bear head accessory, Jago had a cool skull mask and camouflage look. Sadira looked way different.

I think a lot of those ideas were the best… I wish they could all make the game some how one day.

I really loved sadiras more regal attire in the concepts