What is your preferred Killer Instinct controller?

Pad all the way. Don’t wanna spend 200 bucks on a stick. Plus I would have to relearn the game basically. And I like my shortcut buttons.

I love my Elite. It feels much more precise than the standard controller.

My comment is above friend, but good so far I genuinely enjoy it.

I’d love to get my hands on an Elite; I just can’t justify the cost.

I’m holding out for a sale somewhere down the line.

A mix between both, started and learned with a pad and switched over to the stick later on.
Now it just depends on, if want to fork out the ‘light’ or the ‘heavy’ controller, when i’m going to play fighters :v

My comments are also above, take them as you will. To summarise though, two controlers in around 4 months for that price… well… as good as it can be, there are times where it just… isn’t…

Pad, but I’m waiting for one that I can use properly. I have no choice but to use the analogue stick because the D-pad is diabolical even for something as simple as quarter circle motions.

I’ve seen the pad under the hood and I’m confused that the D-pad has only 4-directions on the circuit board.

Does anyone know of a good alternate pad to purchase that might help out?

I have no choice but to use the analogue stick because the D-pad is diabolical even for something as simple as quarter circle motions.

I could do QC motions better on my D-Pad before I wore it out. Now I’m forced to use my Analog stick, and dashing takes a while to get used to on it. I do a bit of both now, D-Pad for back-forward characters, analog for QC. Makes it really hard to decide what to do when playing as Riptor or Cinder lol.

I wouldn’t even pick up KI until the stick was Xbone ready because growing up playing it in the arcade, you could ONLY use stick so it just felt right to play it that way. Then I tried it on a Hori Fighting Commander 4 pad with a PS3/PS4 to Xbone Brook converter to test the converter and it feels realllllly solid. I’m torn now because I want to play stick but that pad is so good. So for now I’m switching back and forth and when S3 comes out I’ll decide once and for all, based on which character I end up sticking with.

Pad for me. Although I wish I had one of those six button Genesis style pads for KI

I’m surprised how few people use a fightstick. I use a modded TE2, octogate, Hori Hayabusa stick with preprogramable LED board.

TE2 user here. I tried playing on the regular Xbox One controller but it just wasn’t working for me. I couldn’t up my game using the controller so I started looking into getting a fight stick. I super-duper lucked out when an electronics store in town had in stock a special edition Killer Instinct TE2, the only one in the store and possibly the whole darn city, for 150$ CDN. I’m pretty sure that if it were in stock again it would be priced at least 300$ CDN without shipping fees.

Anyways, after I got the stick it was challenging at first. The square gate was super restrictive and I could barely squeeze out a DP. After I ordered an octagonal gate and installed it I’ve gotten substantially better. I’ve gotten so accustomed to the TE2 that holding a regular controller feels somehow, alien … Overall I really recommend that people try committing to a fight stick if they can. Using a fight stick for a fighting game just feels natural.

I switch between a hitbox and a modded SFxT TE stick for variety. 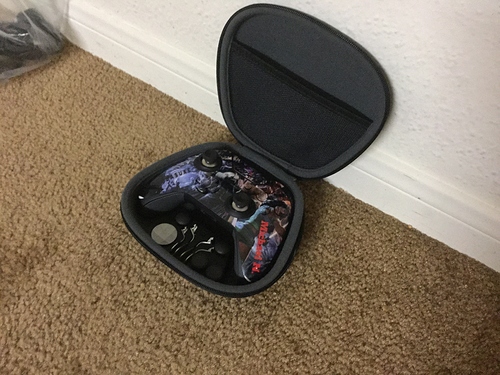 My girlfriend got me an elite controller for Christmas and I’ve never looked back I love it!

KI TE2 stick here. My thumb would go numb if I used a pad for fighting games.
For those using Stick and the Octogonal gate. What’s the benefit over the stock square gate?

Gamepad player here, and I actually use this:

It’s the Wii U Pro Controller.