What is Shadow Jago's weakness?

TL:DR: Shadow Jago is BS, what is he BAD at? Nothing.

Why would anyone NOT play Shadow Jago?

So HOW can you argue that he isn’t the single best character in the game?

The only arguments i have heard so far is:

1.) That he is very reliant on shadow meter. But he gets meter for doing EVERYTHING. Even getting beaten up. I play Omen, so i understand the need for a constant distribution of shadow meter to both players, but his use of shadow meter is more valuable than most characters, less expensive than all characters, and his gameplay isn’t fully RELIANT on the meter, it just unlocks the crazy stuff.

2.) Everything is avoidable. This is a poor excuse. Of course, in a fighting game, there is ALWAYS a way to win, but that does not justify a character clearly having more advantageous gameplay than the rest of the cast. There is not a single area where Shago doesnt excel, and there are no visible trade offs for his advantages. Shago is a huge threat at every area of the screen, and from every direction. The only way to get any kind of advantage against him is to block every part of his offence. Considering he can easily go high/low/left/right/throw at MULTIPLE points in a single block string, means that the only way to get a point when it is “your turn” is to be 100% inside your opponents head (Assuming they arent a bad player, who just goes for the SAME block string every time). If you dont KNOW when they are about to pre-maturely end their block string and attempt a new mix-up, and know exactly which direction they will be going, even counter-hitting with reversals can be difficult.

Please, someone explain to me a “disadvantage” of Shadow Jago.

He’s literally negative frames on everything. They even nerfed surge dive kick. His damage is on the lower end of the spectrum. Basically he has to hit you a lot to kill you. And most things you block you can full combo punish.

He’s neither bad or amazing from my experience with both playing and playing against him.

He can perform multiple safe offences. Yes, they are few, but they are still WAY too effective for someone who has the best of EVERYTHING else.

I just told you what his weaknesses are. Weak damage, lots of negative frames. I’m not interested in debating something you’re slanted on. You have your answer to your original question. Goodluck.

But thats not “Weak”. And definitely not a good justification.

I will say that if you think Shago has some of the best normals in the game, you’re probably not paying attention. And if you think being -billion on everything is ok, then yeah, I guess Shago’s ridiculously overpowered.

Other than that, I’ll just leave this one alone.

As a pretty decent Shago main, it takes more concentration and focus to play him then most of the cast. His only safe special move is his fireball, which can be easily revered by any projectile invincible move. Even his surged moves got nerded and can be jabbed after block, then hit confirmed into a punish combo. What I’m inferring, according to everyones’ opinion on him, is that it takes a certain play style / mindset to go against him. With Glacious, you have to stay up close. thunder, be aware of his mix ups and cmd throws ect. Every character has a weakness, your job is find it hen exploit it.

His only safe special move is his fireball

I dunno man - I don’t really see that he’s amazing at all of the things in the OP - but certainly competent. He feels like a jack-of-all-trades kind of character.

The only thing that gets me is when he slides and then teleports behind me.

The only thing that gets me is when he slides and then teleports behind me.

Ah - surged slide. Most Shagos I run into online can’t even get the juggle after it

Exactly! His fireball game is meant to pester the enemy and make them uncomfortable no matter where they are on the screen. They do laughable damage as well.

They do laughable damage as well.

I just don’t like that his slide can go full-screen. They nerfed Jago’s wind-kick because it did the same, but they’re not willing to do that with Shago?

Good point. I wouldn’t mind a small nerf, but you also have to consider that Jago can make it safe sliding metered fireball and still apply pressure afterwards. The heavy slide is used for a punish tool for whiffed normals or DPs. Unless it’s an inexperienced Shago who will throw it out, which leads to a heavy punish when it’s blocked. Also, the other slides are punishable as well. I mainly use them as a means to quickly move around the screen, instead of an offensive option.

Shadow jago NEEDS shadow meter. He’s really good once he has it. Although if you can keep it in check (spinal, omen) is really hard to combat his momentum. His Normals are almost even to jago. Which means block strings. He’sVery unsafe. You will be opened if you make uncalculated risk with dive kick, slide, stagger kick, close fireball, DP. Solid mix up and pressure will prevent him from doing anything about it(sabrewulf, riptor, hisako, etc). 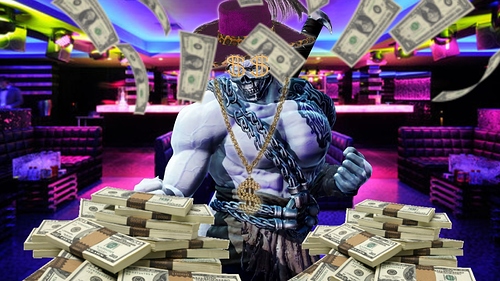 Funny that you said Riptor would be a counter pick, she always gives me trouble when I play Shago.

I bought Shago ONLY to learn his moves so i could tell what was safe, and what wasn’t. I have not played 1 match with him, and i dont think i ever will.

Hope IG enjoys my money. I only gave it to them so i could have a fair chance against the character.

Yes but I said that off her tools.