Start a new team on godlike.

I start a new team on godlike mode or easy mode it’s the same thing.

The game crashed (Freeze) when i start a mission… 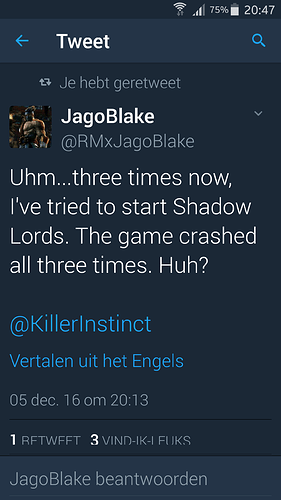 I have the same problem, i can start Shadow Lords on each difficultys but right after the tutorial to show me how to do a psychic breaker and how to equip stuffs before a fight, when i start the fight, the game freeze into an infinite loading (tour 2) and i need to restart the game to play again

Now the mode doesn’t crash when I start a new game in Godlike, but I lost all of my inventory, guardians, astral gems and KI Gold.
I’m starting to get a little pissed.

Still cant launch in normal or challenging though, and godlike without items is no fun…

according to the devs there will be a hotfix for it.

-sigh- Still can’t start up anything other than Godlike… Makes it difficult to test out Kilgore. It’s a real trial by fire. I wanted to try him without items to get the vanilla DerpGir experience, but that got me killed twice so I had to deck him out with good stuff to make any significant headway. Day One Kilgore vs Godlike buffed AI isn’t exactly fun if you don’t bring buffs yourself.

Eh, whatever. I guess I’ll just have to learn the hard way. Maybe that means by the time he comes out for real I might be half decent with him.

@TotalJimkata forgive me if I’m tagging you incorrectly/unnecessarily. I’ve been having the same issue for a while now - Shadow Lords refuses to load anything - it looks like it’s going to load, but doesn’t at all, simply crashes to dashboard or the PC equivalent regardless of how many resets I’ve tried etc.

I really hope this gets fixed soon, as I have a couple of accessibility theories I want to test.

still crashing for me

Still can only play in Godlike.

Be patient, the team has a fix in place. Its closer than you think.

I reinstalled the entire game. I still can’t play in any difficult that isn’t Godlike, but at least I have my inventory back.

I have reason to believe we’re very close to getting a fix.

Can’t tell you how I do, but be patient.

The bug has been found! Here is the official post about it and the optional work around: Shadow Lords Crashing- Fix Found, Work Around (optional)

i HAVE 890 FRIENDS throws xbox out the window