I’ve been wanting to make this thread for a long time, and since I have a feeling that the next few days will be the quiet before the storm, I think now’s the perfect time. But first, let me sandwich this with some positivity:

Have you all watched the Season 3 fight reels? It’s apparent that whoever makes those put a lot of love into demonstrating each fighter, while highlighting some of the new moves from older ones. Oh, and the outro music is the icing on the cake! Well done! Check ‘em out if you haven’t already! 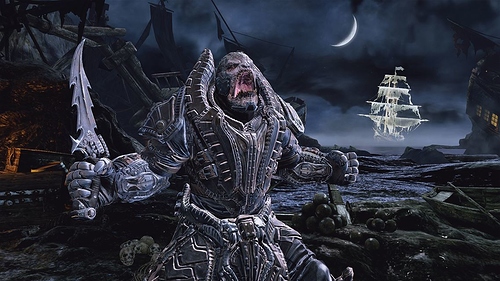 Now for the tough part- Unless you were living under a rock, you were likely spoiled by the unfortunate leak that Mira & General RAAM were inbound to Killer Instinct… It’s a ■■■■ shame because I absolutely love the big reveals that the KI Crew makes for their latest fighters, and I always enjoy a well-planned surprise. But how did the Mira/RAAM leak happen? Does Iron Galaxy or Microsoft know who spilled the beans? And for the community, how did you feel if you were unlucky enough to have them spoiled for you? While I was incredibly disappointed in the spoilage when the leak invaded my Twitter feed (with a big “Hey Look! Mira & General RAAM coming to Killer Instinct!!!”), I still loved the official reveals, and the characters themselves.

General RAAM is easily my favorite fighter from this season, and unless the final fighter of the season is ultra-special, RAAM is my best buddy of S3. Oh, and I never leave home without my lambent accessories and the Retro yellow color; It’s as if RAAM survived into Gears of War 3 while accepting his lambency fate… Too cool!

Thanks for reading, and it’d be great to hear from both the KI Crew, as well as the community about how they felt when the leaks hit the fan. We’ve got so much to look forward to this month, and I’m totally hyped to see what’s next! Fight on!

I dunno, me personally I’m the kind of person that wants to know what I’m getting for Christmas…too many instances of overhyping a dud. And the same goes for KI. I’d just rather see it coming.

Also, here on the forums we had so much fun with Raam…since they would allow us to talk about him, but his name couldn’t be mentioned. Generally speaking, it typically grinds my Gears, but it was really a lot of fun emerging like locusts & swarming the forums with puns. In fact, it honestly helped to build hype for me, because I really haven’t played Gears much and had no clue who he was.

Wait, you guys had a PUNFEST!? NO FAIR!

Wait, you guys had a PUNFEST!? NO FAIR!

It hurt me dearly, but yes there was one.

General Raamen Noodles is one of my favorites as well.

I hope you guys saw it all in good fun like we did (or at least I did, I can’t really speak for everyone here)…I mean I know stuff like leaks can be detrimental to plans & such, but once the cat’s out of the bag you can’t put it back in…but like I said, in it’s own weird way, the punfest really kinda hyped up Raam for me where if he was just dropped like he was I would have been like “who the heck is that and why is he taking a slot a better character should have had?” But then again I’ve hardly ever played any Gears games…I don’t like the cover mechanics.

In a way, I was lucky. All I got, with my lack of sight, were two names and some brief info. So that was ok, even though it did spoil the hype. I hope IG knows who did it, as they didn’t deserve to have their work outed ahead of time, regardless of how much hype it might or might not have built up.

I personally did not like that it was leaked and I even got into a few arguments with the guy who posted it all over Facebook and the guy that broke it first on youtube. Both of them were so quick to post it to be the first with no spoiler warning.

Thats what I dont like is when people dont use spoiler tags and basically ruin it for everyone.

I think the leak really hurt both characters becasue the hype was just non existent by the time they released.
Luckily I enjoyed both characters and played them to lvl 50 and had a blast. I m really glad nothing has been leaked or reveal for this last character… I hope its a good one!

I think the leak really hurt both characters becasue the hype was just non existent by the time they released. Luckily I enjoyed both characters and played them to lvl 50 and had a blast. I m really glad nothing has been leaked or reveal for this last character… I hope its a good one!

I agree with this sentiment; +1.

I m really glad nothing has been leaked or reveal for this last character… I hope its a good one!

This is just me, but with the extreme radio silence on this one, they’ve gotta be dropping one hell of a bomb…my guess is it’s either going to be Eyedol (mostly because Adam mentioned at one point that Eyedol wouldn’t be tease-able because everyone would know it was him), or MS is bringing out their big Mjolnir gun. I mean with KI, what else could they do that wouldn’t either get a “meh” or a sad trombone response in regards to shock & surprise hype?

I was pretty excited to hear about RAAM when the info leaked but it definitely took away a lot of his thunder. Still, I love the character and he is probably my 2nd favorite of the entire cast.

I personally would have preferred if the info hadn’t leaked and he was revealed properly but in the end, it doesn’t really matter.

You know, had they not got leaked, I think the hype levels would have been far more stronger.

Face it, a vampire, something that the KI Community had wanted for a long time (and if you don’t know already, there was a scrapped vampire character for KI2). Gears of War character…well, I can’t say if this was fan demand too though…

I don’t know…it may be me but I was expecting a vampire character to be more like Gabriel Belmont in the looks department, and it seems like we got his little sister instead. I really don’t think her current popularity or lack thereof is much of a side effect of her being leaked as it is she’s somewhat complicated to use effectively…I guess the best way to say it is she suffers from Starfox Zero syndrome. Sure it’s what people wanted, but not in the way it was presented.

Of course, this is just my opinion. I know lots of people love that she was added…me…meh…I’d rather see…well…a KI version of Gabriel, to be quite honest.

Was very disappointed that Raam was put in or even considered. His release shows that he is a tall, clunky, hard to program character. All of the reasons they said they couldn’t put Eyedol in for. Raam fits KI criteria lower than Eyedol did. He is fun to play but, him being put in instead of Eyedol was not something I liked one bit. Specifically since we have guests from not 1, but 2 shooter games. They could have picked better 3rd guest but, it is pretty obvious that Halo and Gears are microsoft’s cash cows and low and behold those 2 get a guest character in a microsoft backed game.

Raam definitely needs some tuneups before he gets the credit from me as a full fledged character. He has a lot of copy cat or similar animations with not much vocal activity so he is very bland and boring on the eyes during gameplay. Yes I understand that he is a grappler but, so is Thunder and he isn’t boring to watch or play. Disappointed in Raam joining the cast? Yes. Can I accept him? Yes only if Eyedol is given a chance since the design choice of Raam fits to a T why they said Eyedol cannot make it. We wil see after the character survey what happens to the roster. Either way, as long as the game is here I will enjoy playing my main robot. I can always ignore the characters I don’t like, appreciate the ones I do, and hope that Fulgore gets a royal purple color along with his original Tiger Striped ponytail.

Specifically since we have guests from not 1, but 2 fps games with toxic communities.

First off - 1 FPS game! Second - bit of a glass house around these parts to be casting stones at any other communities…

My apogies, only speaking from my personal experience. I did edit it out for sake of not trying to cast stones but, I don’t view it as such since the only more toxic experience I ever had was with League of Legends. Neither Halo nor Gears were ever that bad but, I didn’t have an enjoyable experience with Halo or Gears online. If you turned off voice, people sent messages. If you blocked them, they had their friend send them. So needless to say I no longer play either game.

What was it like for you guys at Iron Galaxy when the leak happened? I imagine it must have been a bit of a kick in the balls to have a good proportion of the marketing strategy ruined? Did it alter much of how/when things were officially revealed?

As a game developer in-training, I myself am especially curious how something like this could happen.

I recall another example of this occurring in the brony community - albeit, decidedly worse: A group of fans developing a fighting game (Fighting is Magic) had a QA version leaked online, causing the team to reportedly close their QA test program. (Before a major update to that build, no less.

I understand the importance of receiving player feedback on content but I find this sort of abuse of developer/player trust simply unacceptable.

I think you’ll find that the way parts of the competitive KI scene has behaved recently is a fine demonstration that developer/player trust is extremely fragile.