Since Kim Wu, how would you guys picture Tusk’s debut trailer?

I posted a theory somewhere…
Since his KI2 story is like this:

“A barbarian killing machine from the cold wastelands to the north, Tusk is the last of a warrior caste decimated by the bitter rivalry of the Warlords and finally reduced to a sole survivor during their costly banishment to Limbo. He now lives in wealth and glory as Champion of the old world’s Gladiatorial Arena; but when the demonic shadow of Gargos rises again, Tusk sets his jaw, takes up his blade and casts aside all other responsibilities to settle this blood feud once and for all.”

I can imagine Tusk fighting Gargos’ forces in ancient times, but his band of warriors were slain and Tusk himself was frozen solid before Gargos was defeated and thrown into Limbo. And now since Gargos returns, Tusk has now somehow broken free of his icy prison, awoken from his long slumber and is ready to get revenge on the demon lord!

However, I can’t help but think that he has some sort of connection to Spinal, due to that plaid cloth that hangs along his leg, as that looks awfully alot like Spinal’s kilt! I originally thought Tusk wore a kilt, but he seems to have found some more modern torn pants to put on.

Dude, this was sick. What if he became immortal due to an artifact or something like that, which granted him massive strength, and skin as hard as rock?

a Sword of the Ancients maybe?

He could be immortal and fought alongside many warriors in different countries.

He was then frozen and brought to our time to hunt down Gargos. Taking on a modern look.

A mix of Highlander, He-Man and Thor.

My name… is Tusk. I have the power… I am immortal. There can be… ONLY ONE!

That accent! That’s almost as bad as Sean Connery’s.

It is a really difficut accent to get just right, but I do love how the rest of the world tries to imitate it. Uh god, that drew a tear. Thank you for that one.

clears throat Ok, yes. I do like that story for a Tusk trailer.

“I have seen what ruin Gagos brought to the world the last time he and his minions past through those hellish gates. Now some fool has opened that gate and the world once again plummets into chaos. The prophecy comes to fruition, the power of the ancients surges through my veins and my blade hungers for demon blood once more. DAHH!!!”

IG/MS has my email, contact whenever the check is ready.

I honestly think he is the singer of Amon Amarth searching for new lyrical ideas during the break from touring and recording the next album. He goes on an adventure based off an old map he found in his grandfathers basement. It leads him to the ship wreck…but his journey their was rough as his torn metal head cloths show…becasue he isn’t a professional survivor. He finds the artifact noted on the map and behold! He raises his sword int eh air and with a growling death metal vocal approach he screams…

“I HAVE THE POWER!!!” (And some awesome lyrics for the new album called “Killer Instinct”!)

I have a strong feeling that Kim Wu will be immature enough to not defeat Gargos (she will try, though), and Tusk will have some role in helping her/defeating Gargos himself. 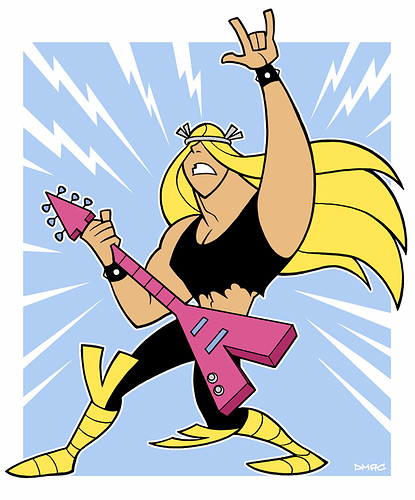 So Tusk has an alter-ego then?

Definitely has to be either one of his retro alternates or one of his premium alternates!!!
It has toooooooo!!
Dont let us down MS/IG…we want a Amon Amarth Tusk!!!

@TempusChaoti Wonder when Tusk’s trailer will be revealed?

True. Her arrogance is going to get her face stomped in. Tusk will have to pick up her slack… As usual.

I can picture Tusk’s quote in the trailer.

Tusk: I’ve roamed this earth for about 5,000 years since the time of Babylon. I’ve seen vikings in various European countries waging war. As were samurai, assassins, and those from China’s dynasty. Civilizations fell… allies and enemies were reduced to ash. I should know. I was there for all… thanks to the demon who took my life away.

Now… once frozen, I’m reborn in this new time, as his servants prepare for his return. I… will be ready.

My name is Tusk. I am barbarian, viking, survivor and warrior. And I have the power! I… am immortal! There can be only one!

Death comes to all… except me.