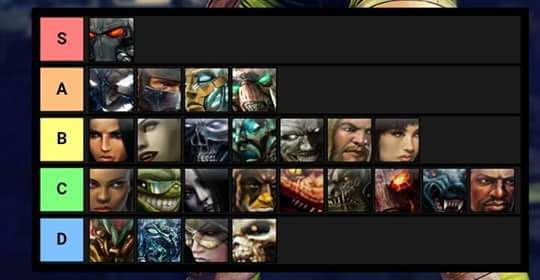 What did you guys think of that? Does it make any sense to you? Who did this was one of the players at the professional level. Will things like that come from the community or from quite habeis people can drive future updates where they incorporate buffs and new features for the characters? Months ago I received an email that asked me about KI being balanced, with characters that have points sources and weaknesses, however, through this table, it seems to me that there are characters that are dimly strong and others are the definition of weakness. What would be welcome in KI would balance, of course, the creator of this schematization. Is it from the beginning that the plan was to make a Fulgore game and not a fighting game? I’d put Aria in the S, 'cause that’s a thousand times worse than Gargos.

I don’t agree but what do I know.

Here’s the current one

Welcome and Contributors Welcome Page! WARNING- This is not data driven, it is opinion driven. Everything here is represents the agrigate opinions of our contributors. If you feel qualified to contribute and would like to join the project, ask...

But this is outdated too
Jago,Maya, Kilgore, Gargos has been nerfed since then
Glasius has been buffed

I’m só Sorry, I can’t see, do YouTube have a link?

If you look at the list of contributors on the one Syndicate posted you will see that is far from the truth.

We are agreeing. I meant posted earlier to my post, not the one OP posted.

I didn’t agree with the OP tier list when it was released, and I certainly don’t think it’s very good now.

i agree with S to A. Not sure about everyone else. I feel like Khan Ra, Kim Wu and Aganos should be lower though and Rash should be B.

i’ve been out of the KI loop for ages now in terms of tier list and balance changes but um when did Arbiter fall so low…I heard he got nerfed but i never thought it would put him in this kind of state?

got me, honestly. i think that character is good AF. idk why everyone puts him in bottom tier aside from the fact that most people don’t play him and therefore don’t know what they’re doing with him. i still say Arbiter is secret top tier. give him like another year for people to start picking him and developing tech.

Aganos has made decent results at the KIWC and by multiple folk so that must account for something at least (even if you ay that he gets decent results due to weak matchup knowledge coasting off weak match knowledge only lasts for so long)?

Fulgore S tier? You know its fake also Kim should be an A

I did not know that I’m not a fulgore main.

Uh, no he can’t. He’s got some relatively high damage one-chances, but the damage never went above…what was it, like 50% for a full bar?

Not really. Aganos is actually a very solid character, even if someone knows the MU very well.

Aganos’ issues as a character are really just that he has a few tough MU’s, and that he demands a relatively high “floor” of play or else he gets dunked pretty easily.