I still feel that after 3 years of this game being out, it has things missing from ranked matchmaking. This is my opinion.

“Are you sure” or “Confirm Character Selection” option.

Giving the other player and option to select a stage.

An option to see if your playing and Xbox player or a PC player.

With cross play implemented, this should’ve been obvious. This can determine which platform the opponents playing on and could establish their internet connection.

A punishment system for rage quitters

Although we got punishments for cheaters in KI, we dont have punisments for RQers other than giving you a loss on your permanent record. It seems rare to get a RQ in KI, but IMO it still feels like rage quitters need to be punished for crimes against the KI community. People who rage quit, should be deranked or banned for 24 hours.

These are my ideas and opinions of what should be in ranked. What do you think? Tell me in the replies below.

I’ve been requesting this since season 1. Ping, bar, frame delay etc. Something that shows connection quality. Would be nice to be able to filter by connection in exhibition as well

Giving the other player and option to select a stage.

They should make it so that if your opponent doesn’t select a stage in 5 seconds, then you could select it instead.

A punishment system for rage quitters

KI does have that.

It puts RQers in a jail system for a period of time where they only fight other RQers.

Ranking you down if you keep losing. Shouldn’t just be left in a top rank especially if you only got their using Shadow Jago.

During the netball character select. You choose a character, a costume and a color. Why would you need ANOTHER prompt asking you if you want the character? YOU CLEARLY chose this character 3 times lol

I believe that was removed after a backlash.

Those were my exact thoughts. Another prompt isn’t necessary at all.

An option to see if your playing and Xbox player or a PC player.

With cross play implemented, this should’ve been obvious. This can determine which platform the opponents playing on and could establish their internet connection.

This one is a must have.

What we SHOULD be able to do is Select your region (or all regions) the level of skill (Same Skill or More Skill) and player connection strength. If SF can do this, so can KI.

The positives: Better battles with less lag as well as making sure that you are almost always fighting people of your skill level.

Negatives: The more choosy you are the longer you’re gonna have to wait for a fight.

The current system works. During the DH years they had a “Jail” system that forced everybody that RQ’d to get a special icon (that showed bars) and force you to play other RQers… That issue? 99.9% of the entire KI populace was sent to jail, because the system wasn’t smart enough to know if the RQ happened a legit RQ or because of a match lagging out, system glitch… whot knot.

Obviously you don’t want people to get punished for something out of their control.

In terms of actually Rage Quitting… Me personally, there are two reasons I’ll quit a match… The match is too laggy. I’m sorry but if I see nothing but broken frames and I’m being teabagged inbetween every visible frame I see, I’m not going to give you the time of day. There are much better people to fight. I’ll gladly take my loss.

Another reason is fighting a person that abuses glitches to get wins. Back before the Kan Ra glitch was fixed, I kept running across a guy that would purposely make the game crash, and then literally wait it out until I quit, so he’d get the win. He did this EVERY time. So after these few run ins, if his name came up, I’d immediately quit. Since I can’t block him, that was the only other option I had.

In truth, I don’t care. As I can’t honestly determine if the person REALLY rage quitted or not, I’m not going to judge. I get the win, the points, and advance the leader board, so all is good in my world.

I`d love to see stage select method like from MKX - each player selects his own and it automatically picks one of the two.

And I hate how some people intentionally wait full time.

For the selection stuff they should just do what MKX does, you can just press B if you accidentally select a character you don’t want and pick another, you can do this as many times as you want until the timer hits 0, if it hits 0 you play as whoever you are hovering over.

Stage select - Just let both pick, and let the game randomly choose which if the 2 gets used. Both players can start on random by default that way if they don’t care they can just press A immediately and the game will choose one.

You dont get points anymore if a person rage quits at you and you are set into a “policying status” like if you were the “accused one” for making other playes rage quit.

People who play fair are now punished because of those who rage quit. And there are yeah lots of ways to know when a person rage quits or not…

I have ppl who left the game on the final hit of an ultra, after having almost depleted all my HP meter, ppl rage quit because you are listening to their opened voice and listen cleary their rage on the other side, and with all those ppl rage quitting at me, i am the punished one, unable to get any more points if a fight is not finished because of rage quitters.

so that you said:

In truth, I don’t care. As I can’t honestly determine if the person REALLY rage quitted or not, I’m not going to judge. I get the win, the points, and advance the leader board, so all is good in my world.

is no more valid and for new players like me this really pisses off.

First of all you DO get points if a person Rage Quits on you. As a Sadira main, I get this ALL the time. Every single time somebody has RQed on me, I got the points. Every single time the matched lagged out on their end, I get the points. There was a Thunder player who always got a TON of wins because his network was so bad. Over half the time we’d play he’d lag out and I’d get 1000+ points.

If you’re aren’t getting points, then the netcode is deeming you are to blame for the connection failure. I’ve been playing KI3 since it debute back in 2013, and I’ve never been punished for somebody RQing on me. During the first few months of S1 you didn’t get points unless you made it to the Ultra, and yeah that sucked, but that was changed rather quickly and you got the points no matter if they stayed or left.

If you’re aren’t getting points, then the netcode is deeming you are to blame for the connection failure.

It’s not the netcode doing anything… There is a rule about this to punish the winner (instead of punish the loser) and i can prove the existence of this rule… After 5 times someone rage quits at your face, you are set into an observation status, saying you wont get any more points until the begin of the next month.

As i said, here is the proof of what I am saying. 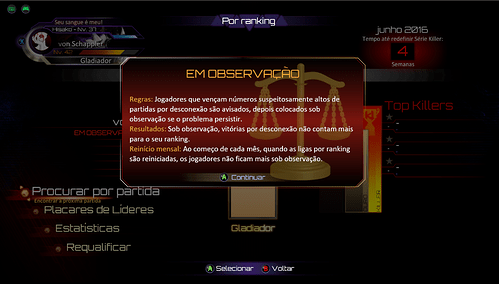 I had lots of players rage quitting at me in 4 days playing this game on this month, and that is what I get for playing fairly.

Translation to the text on the image:

Rules: Players who win many fights by disconnection (aka as rage quit, once the oponente has to reset it’s device / close the game and disconnect from the server) are warned, then set on the “observation” status if the issue continues.

Monthly Reset: At the begin of each month, when the ranking leagues restart, lose your observation status.

That said, it means you don’t get points from rage quitter after the 5th win, that is a pic i just took from my KI (on w10).

I am getting punished because 5+ players have raged quit on my face… as for them, who quit / disconnected at my face, no punishment, and if another player just wants to rage quit at me, s/he can and I wont earn anything until July from them to my ranks, aka i am getting punished unfairly by their disconnects / device resets.

I would like the option to see players replays like in sfv, this is a really good tool to improve and learn the game .

I mean , a way to see the last 50 fights of any ranked player , and also a way to save the fights you want to see again later . This could be a really good tool for new comers and old players too.

Also a option to save as favorite replay any fight after the end of the match, this option should work in any vs mode, this will help to make more easy to watch relevant encounters and some fights that for any reason you need to watch again later and don’t have time to browse in the long archive of replays . Or you could divide the archive in 2 , ranked archive and lobby/exhibition archive
with more information , who win , and name of the players (TAG) this will make the replays archive more easy to use.

I dont know if you understood my post, but it was not a suggestion. i was showing that i was being punished by other players fault when the rage quit at me, while getting no punishment.

Sorry , I get your point , it is a shame . They should fix this . My post was an answer to the topic , what ranked needs. Sorry for your situation.

Sorry , I get your point , it is a shame . They should fix this . My post was an answer to the topic , what ranked needs. Sorry for your situation.

That’s ok… Im getting use to this forum once a joined today, and those topics posted as replies are just out of the real place. If I reply you, my post should be set in a inner level below your post, not by the end of the topic…

Also, i just wanted to remark here: I posted all that info and that pic because another coleague said to be winning all his points from rage quitters, while that is not what happens. that image was taken from my game by the moment i was playing it, to show that if anyone else disconnects / rage quit at my face, i wont earn anything until the next month, proving the coleague is mistaken at some point when it’s said to still earn all points from rage quitters.

Also another mistaken commited by him, pinpointing that I would not be getting any point for being “the one to blame for the connection failure” (by the netcode), bbecause if it was me, the other player wouldn’t even be fighting or anything… but those players i make reference here fought bravely, until the limits, the game had no freezing at any time, and the match suddenly finishes on the ultra / last hit…

Ok, I am really the one to blame because their connection fails just when they are on the last hit to be killed.