We’re back! Last week seems like such a long time ago, doesn’t it? There was much to reveal around Killer Instinct Season 3, and you may have noticed that we did not post Cinder’s backstory on Monday, as originally planned. It’s true. We wanted to save this story since we knew your attention would be drawn elsewhere, so here it is!

I ADMIT, I CACKLED. Great stuff. I loved the repertoire between Cinder and ARIA, his snark attitude bouncing of her calculated and completely cold personality was entertaining. I liked the parallels it drew between their personalities and how that highlighted their differences; that also helped explain why he was alright with joining up with her cause.

I was hoping for a little bit more information on how she got Glacius’ DNA, and what exactly the procedures were behind Project Cinder and Ben’s transformation–it would have been really cool to have documentation on his transformation etc–but maybe that would have involved too much sciency-jargon or suspension of disbelief. As it is, this is still a very solid backstory, gives really good insight into both character’s personalities.

We seriously need NEW KI comics. The old ones suffered because all comics kinda stank in the 90’s. This whole conversation could be made into a beautiful couple of pages. Loved the dialogue!

I’m picturing him sulking and poking around the “gerbil cage” just to spite ARIA.

Nice to have some direct connection between him and ARIA through direct conversation, I think.

You write a good story @rukizzel (assuming you’re the one who writes them?) but there is so much untapped potential in KI’s fiction that I feel like I did playing Destiny’s campaign.

This was a super entertaining back and forth, and it only makes me want a KI comic more.

Interesting to see that Cinder/Ben isn’t exactly a greedy jerk; just someone who likes to do his job and do his job well.

And next week we’ll finally get the full story of who I’ve wanted since the beginning: A-Bomb. (I refuse to call her anything different from this point onward.)

That was the funniest backstory I read yet (Riptor’s coming in second). Love the dialogue here.

What’s with the Ultratech Characters having the more unique backstories?

Awesome. I liked getting the nuts and bolts of this piece of Cinder’s background. I also like Cinder’s snark. Much appreciated.

Can’t believe there’s only one left! Where does the time go…

I’ll be curious to see what part of her story is told.

This story was pretty damn funny, I have to admit. The only thing its missing is a little Tiger Blood.

Of whether or not I’m [expletive] winning!

Seriously, I was bouncing around Charlie Sheen and Deadpool reading Cinder’s lines.

You write a good story @rukizzel (assuming you’re the one who writes them?) but there is so much untapped potential in KI’s fiction that I feel like I did playing Destiny’s campaign.

Definitely not me writing these. I can’t take that credit. I simply deliver them to you.

As far as potential KI fiction - there’s only so much that can be created at any time. It would be sweet to have a plethora of books like Halo does - not confirming a friggin thing before anyone starts, merely drawing a comparison - but yeah we’ve got our backstories as they are for now.

Correct me if I’m wrong but this is a homage to that excerpt of the KI novel that was cancelled a long time ago right?

He’s not exactly greedy, but he is definitely still a jerk lol. He refers to money as a quantifiable way of “winning” at life, when everybody knows that money is not the only facet of a life well spent. He also doesn’t seem to care about innocent life, but that’s a bit of a trickier topic since in his line of work, sacrifices undoubtedly have to be made… I just think it was a little eerie how remorseless he was over it.

Of course, him being a jerk isn’t a bad thing by any means–it’s always been one of the forefront components of his personality, and it’s good to see that they can have him remain true to that, while giving him a couple more layers in this discourse. I personally am pleased!

Awesome bio. Love the format on this one. A dialogue is a nice change of pace. Great humor!

Blast From The Past: Unreleased Killer Instinct Novel Preview- Cinder’s Back...

Back in the late 1990s, Rare writer extraordinaire, Leigh Loveday, was working on a Killer Instinct novel to further deepen the knowledge behind the characters featured in the franchise. A couple o…

For Cinder,he thinks it is a monday but… 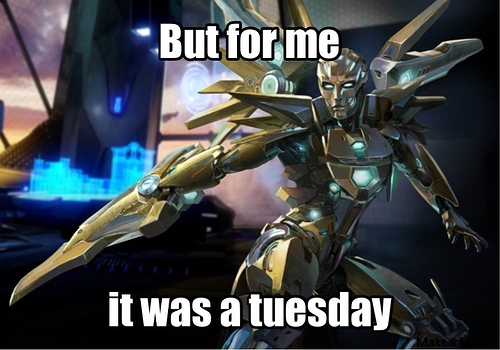 Woa, dude. Thank you for sharing this… the lore nerd and character enthusiast in me is going nuts. Would have loved to see something like this get printed! Interesting to see that no matter the medium, Ultratech slanders Glacius as a relentless, dangerous killer despite the fact that he is anything but… the ice alien’s character arc and story is so moving to me, ugh.