You were really skilled (hence the ranked compliment) and abusing an admittedly and publicly broken OP character (that has since been fixed), so yeah, of course I was salty.

I usually hear kids running around the living room while the parent plays. That’s about all that’s said to me lol.

Oh, those are the worst. The ones with music blaring, or hearing background noise. Ugh…the worst I say. Thank IG for the mute button.

If I hear music that’s an immediate mute from me.

I always mute everybody.

This is almost a list on why I play single player games, and why I love shadow lords mode

InB4 Gargos’ dialogue is replaced with “You’re good… At Pooping!”

The ones with music blaring, or hearing background noise.

Yeah pretty much always hit Mute as soon as any match starts because of stuff like that. I had to deal with that nonsense in MKX and it really can be distracting and you can’t mute them, so they can sit there and yell, scream, make dumb noises, blast music, etc. the whole match lol

Honestly, most of the time my conversations are friendly. I think I’ve gotten one really salty person in all my time playing, and I hardly remember what they said.

My personal favorite was fighting a TJ that kept popping off and yelling while he was comboing me, kinda kicking my butt…and then I took a lifebar off of him.

“Thanks, you’re doing good, too.” I respond.

Immediately starts comboing me again and does the same thing. It was super funny to me. He wasn’t even trash talking; dude was just his own personal commentator, freaking out at his own moves.

Was in a lobby some weeks back. It was the host, and im guessing some of his friends, cuz they werent in party chat. I beat two of them and heard the host say that i was trying to counter pick against them to which i had a hearty chuckle. I like to play around with most of the cast. Went, i would say around 7-0 before being kicked. I guess he didnt realize that i couldnt see the characters they were choosing.

I had someone tell me that Aganos was made for toddlers. That he has armor and doesn’t get punished for making mistakes and doesn’t have to play footsies with the rest of the cast.

This video is the best. KI should take notes. Right? The corner is rude.

Hey now! I said “would you kindly go and get stepped on by a Big Daddy?”

So clearly, I didn’t mean it. 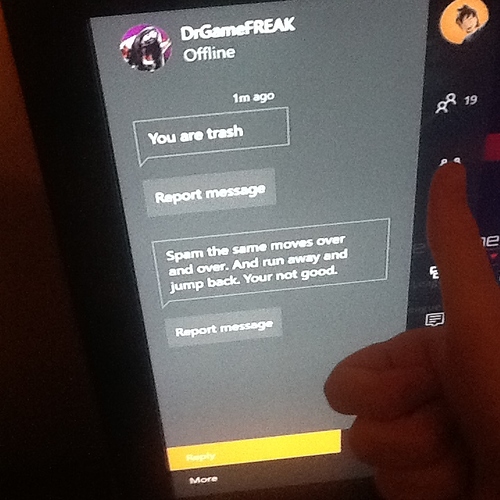 I love salty’s tears! They are delicious, I’ve ever tasted!

I got into exhibition one day and fought what I assumed was a low rank Tusk as he was the free character at the time. First match I wasn’t really paying attention as my fella was talking to me, and you do really have to watch Tusk before he steals your whole health bar away.

I sc rew (wow, this is seriously censored in this context?) up my face for not paying attention, think to myself "right, ok, pay attention this time " rematch, I win with almost no issues, hear him grumble in the background, rematch, I win again, the same thing a third time.

Next match, out of nowhere, he addresses me directly with "y’all ain’t s**** you know that? " to which I responded "ok, whatever, it’s just a game " he and his friend giggle in the background and decide to ask "is you a female? " I respond in a sarcastic tone by saying I’m a big hairy bloke called Dave, more giggling, I win a few more times before he gets fed up and says "aight, I’m done with you. "

Lol. I guess you got it reduced from what he could have said.

That’s horrible dude, this is one reason why I always mute people immediately.

Eh, I actually found it pretty amusing, I don’t get on mic very often, I generally wait and see if my op is friendly and chatty, so this was an exception.

Though my fella made me laugh after, saying “dude seems like he had a pretty huge ego, was probably just sore he got beat by a random English girl.” which as I said is irrelevant but for some reason, some people take stuff like that to heart, no girls on the Internet and all that jazz.