The Force Awakens (no spoilers)

Sat in a packed theatre at 10:00 am and saw the force awakens with my 7 year old son this morning. That’s how old I was when my dad took me to see Return of the Jedi.

I’m not going to pretend it was Citizen Kane, but it’s a great, great film. Had a blast and look forward to seeing it again. I’m sure there will be nitpicking nerds agonizing over every detail, but for me it really captured the fun feel of the first trilogy. I thought the new cast was really good and I enjoyed their characters. I didn’t want it to end, and now I can’t wait for the next one. I can’t really ask for more than that.

I, for 1, can’t wait to see it. I’ve already read through some spoiler free reviews and I’m glad to hear that it’s a good film overall. I’m bursting with anticipation. Now if I could just find an open seat…

I’m going with my family Sunday…for my Birthday! Me, my fiancee, my dad and both or are children.

Aiden will wear his Kylo Ren costume, and Ally will wear her Raye costume…I may wear my Red Emperor Palpetine robe.
Its going to be awesome!!!

Saw it this morning. Really, really enjoyed it. I could nitpick a few things, but that’s all I can really do - nitpick. It’s a great return for the franchise, and I didn’t want it to end either. I can’t wait to see what comes next!

It was a great movie, just got done watching it. I enjoyed the hell out of it.

Being in a foreign country without friends or family, I will have to go by myself

and I don’t mind it at all

Unlike mr. Andy, nobody took me out to see Star Wars as I always was the only nerd who liked it and was hiding the fact from my friends, haha.

Glad most people enjoy(ed) it. I hope I can find tickets and see an English version somewhere in Tokyo.

At what point can we convert this to a spoiler thread? After this weekend? Cuz I wan’t to discuss!
Overall, a great movie.
…
…
Possible feeling spoiler below
…
…
…
…
…
…
…
…
…
…
…
…
My only complaint is that it just felt a little too familiar in some ways.

As far as your feeling, I can totally see that. I think it was done, on purpose. That doesn’t mean you have to like it, but it was familiar in big ways and small, and it’s kind of fun to go back through those elements.

We have the capability for spoilers, but it would be best to start a new thread about it and keep this one clean.

It’s a good movie and I enjoyed it. That said, it’s one of the weakest SW movies. I’d even go as far as to say that it is my second least favourite (after ep. II). Huge props for them for making new characters likeable. But there are so many problems. Terrbile pacing, unmemorable music, bad villains, rehashing the plot of another episode, a severe lack of exposition as to what the hеll happened between ep. VI and VII, a few other issues that can’t be explained without spoilers. I feel like the long-term success of this movie will ultimately depend on its sequels and it’s a very big flaw.
I’ve played KotOR and KotOR 2 recently and these games blow TFA out of the water in terms of writing (especially the second one).

Yes, let’s keep this 1 clean, for my sake! I haven’t seen it yet! Don’t worry though - I’m hoping to see it before next year rolls around.

I grew up when the films were on VHS (I was born in '84). I remember sitting in my living room in awe of how cool the characters were and how funny/awesome the situations they got themselves in became as they progressed throughout the 3 films. It left a lasting and indelible impression on me, even though I wasn’t old enough to appreciate the original film’s release in theaters. It’s a large part of why I call myself GG - I’m a big sci-fi nut (along with Star Wars, I have an appreciation for its rival, Star Trek, as well as The Hitchhiker’s Guide to the Galaxy, Halo, Doctor Who, and much, much more…)!

I saw it tonight with the family (part of why I missed out on the lobby from that other thread) and I thoroughly enjoyed it. Plenty of good action exemplified by beefy sound design, lots of moments that brought about sheer joyous hype, and some good ol’ nostalgia.
There were some bits about it that I thought were pretty meh (the new villain is a prime example) and there were bits that didn’t hit me as hard as they probably would’ve if I hadn’t had it spoiled for me by some buttmunch in my Facebook news feed Thursday morning…
But over all I really liked it. There were moments that bit me hard, and others that lifted my spirits, and some that gave me vibes from some of the extended media universe. I eagerly await Episode 8. I hope that it only improves on a movie that I enjoyed from start to finish.

Agreed! Thank you! I was really upset when I seen the "possible spoilers line " yesterday…i left this thread immediately. Luckily I seen the movie today and never crossed any spoilers in the last few days…kind of surprised!

Anyway…THE MOVIE WAS AWESOME!!! LOVED IT! THe kids dressed up and we stole the show at the theater! everyone was like…“AWWWW WEEEEEE they are so cute! LOL”

Me, my fiancee, our 2 kids and my dad went today for my Birth Day… if Episode 8 was playing next door as we left episode 7…there is no doubt all 5 of us would have had no problems walking in and sitting another 3 hours to continue watching…THE MOVIE WAS THAT GOOD…for everyone… there is something for everyone to like… kids, wife, old, young…it was perfect. 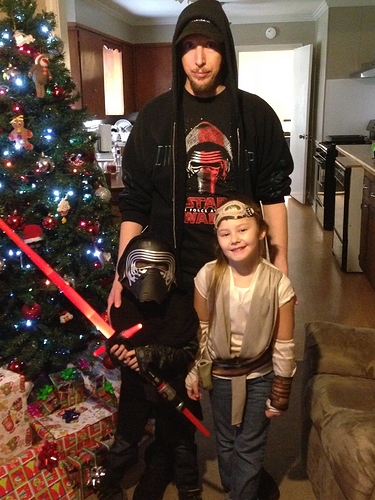 So overall you and your family along with your fiancée are VERY BIG Star Wars fans/fans of Star Wars, yes?

Id say so yes! We have at least 2 costumes a piece (excluding my finacee, she likes the movies but thats about it…nothing extra) toys, games, shirts, dinner place mats…it goes on and on.

Oh yeah, the same here pretty much including having the movies, books, magazines, and t-shirts as well as other Star Wars collectibles/memorabilias

I’m not a big star wars fan, but I was fairly disappointed without going into too much detail if I had to sum up my opinion I would say it was too safe. The movie just felt like a total retread of familiar ground.

Now in a Tokyo theater 5 minutes before the movie starts. Here I am still reading Ultra-Combo forum posts, lol.

Does this behavior also qualify as ‘being a fanboy’? 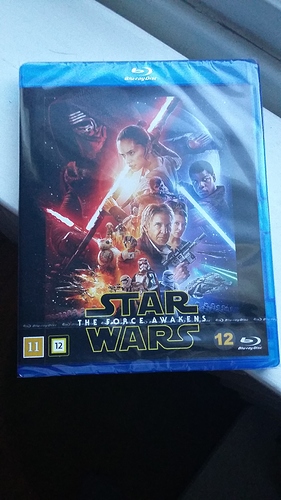 “Long ago in a galaxy far, far away” - Why is Star Wars set in the past?