Thel was born Thel 'Vadam to the Vadam family, rulers of the powerful State of Vadam on Sanghelios the Elite home world 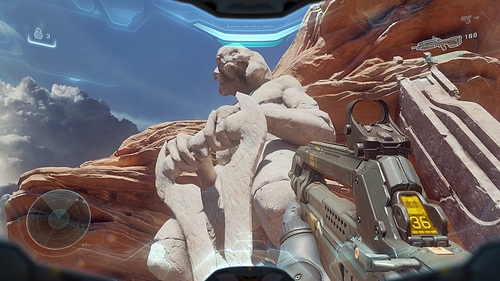 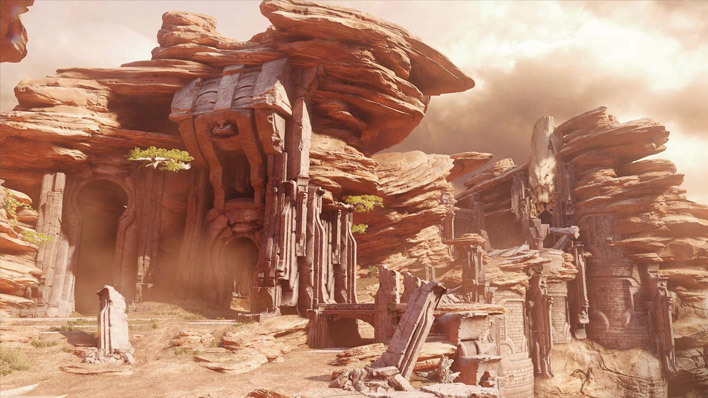 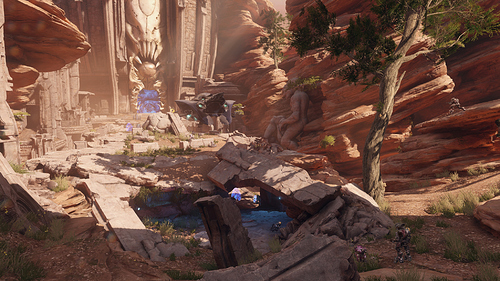 Thel Vadams (Arbiters) skill soon propelled him to ship master but it was his supreme commander days that he was most noted for. Vadamee was one of the most prizes supreme commanders in all of the covenant ranks. 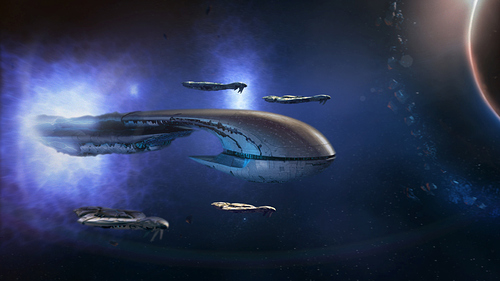 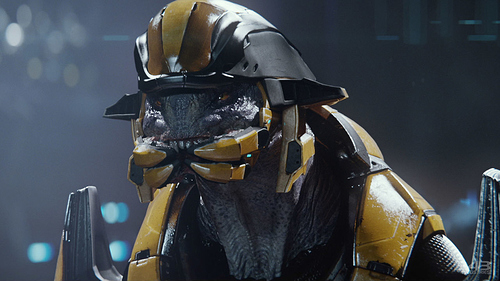 During Thels days as supreme commander Thel was responsible for over 1 billion human casualties, the loss of at least 7 human worlds, the destruction of over 123 human vessels during fleet action and the deaths of over 23,000 UNSC personnel

The battle of Reach (halo reach) was his most prized victory with many spartans dead and a whole planet glassed he pursued Master Chief though slip space. Jumping frantically from covenant the UNSC discovered the first Halo ring. 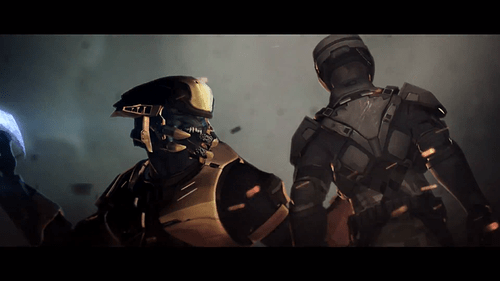 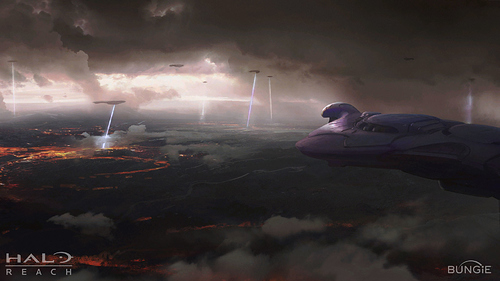 Halo’s and other forerunner tech were seen as religious and sacred in origin. The elder council the prophet of Truth Regret and Mercy believed the Halo’s to be a gate way to heaven or the great journey as they called it.

Cortana Chief AI manage to take down many of the covenant ships that followed them through slip space. Out teched and out gunned Master Chiefs only choice was to crash land on Halo.

Thels armada followed. In the covenants hunt for then remainder of the crash landed UNSC factions a swam of Flood was released. This flood was a parasite feeding on any living organism. They were able to body snatch any living creature and there for populate armies in meer hours.

While trying to find a way to get off Halo Master Chief found out from 343Guilty spark the Halo installations monitor that the Halos were a means to destroy the flood by sterilising the universe.

The only way to save the galaxy was to destroy Halo and the flood on it. Master Chief detonated the nuclear engine’s of the pillar of autumn destroying the Halo and with it the flood (or so he though)

This was Thels Vadamees biggest defeat. The council were enraged. One of the sacred items had been destroyed and Thel was to blame. 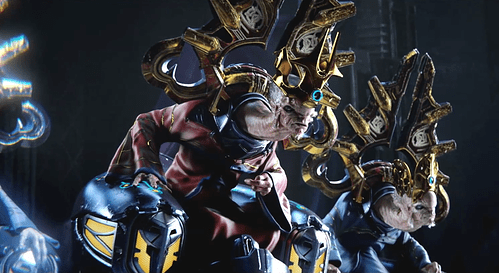 Called to the prophet’s conical Thel was placed on trial. Trying to explain the flood parasites the council grew enraged they wanted blood for Thels incompetence, Thel was branded with the mark of shame publicly but on the eve of his execution the prophets requested his presence. The Prophet’s saw more in Thel than the death sentence that loomed over him.

Thel was offered the role of the Arbiter. Only few in the covenants history had become Arbiters but all had in some way been disgraced or shamed. 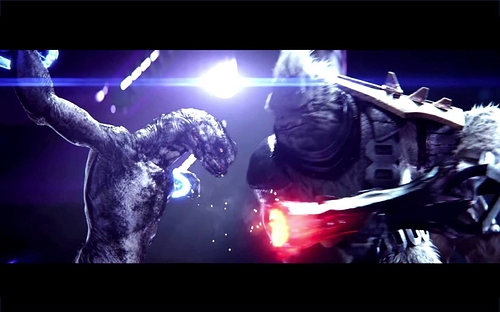 The arbiters role is one of death. They are sent on suicide missions to do work for the prophet and to gain the right to die in battle. The missions set by the prophets were gruelling and only for the most hardened worriers.

The mission at hand was to assassinate a heretic. This heretic called the great journey a lie and there for the prophets liars. Arbiter was sent to silence his blasphemy. 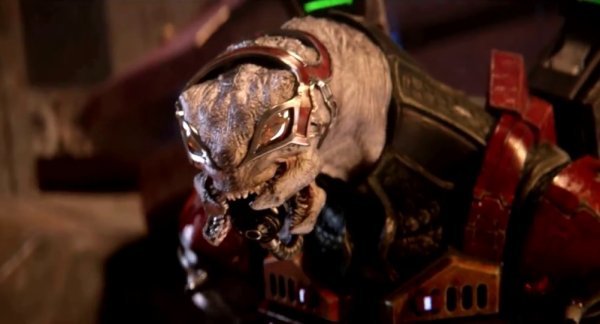 The Arbiter flushed out his pray by cutting the wire that held the installation stable. Face to face the Arbiter learned from the Heretic about the true nature of the halos but following the true code of the covenant the Heretic was silenced. 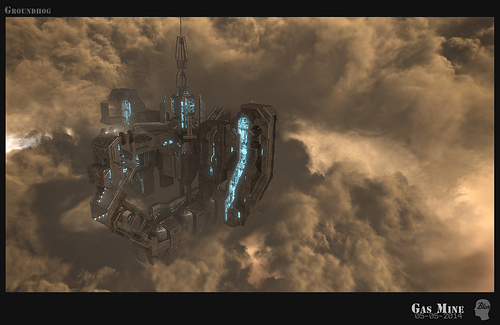 The High Prophet’s, though surprised by the fact that Vadamee had escaped alive from the gas mine, were not ones to waste such an outstanding warrior so Arbiter was sent to the “Quarantine Zone” on Installation 05 to retrieve the “Sacred Icon”, which was needed to activate Delta Halo. 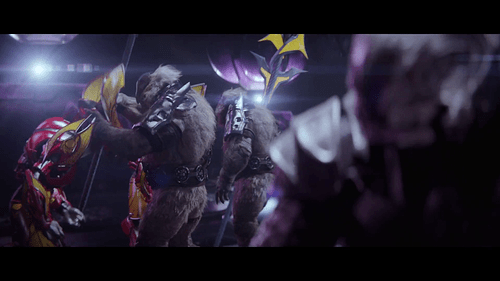 Before this mission, Thel 'Vadamee witnessed the replacement of the Sangheili Honor Guards with Brute Honour Guards. Though distressed by change, and voicing his concerns politely to the Prophet of Truth, 'Vadamee made no further comment.

Arbiter was successful in his battle with the UNSC for the sacred icon. Tartarus the leader of the Brutes (Jiralhanae) claimed the Index for himself. A smug Tartarus informed the wounded Arbiter about the Jiralhanae’ intended genocide of the Sangheili, and that those orders came directly from the High Prophets. A shocked 'Vadamee realised that he had been betrayed seconds before he was blasted into a massive shaft leading to the depths of Installation 05. 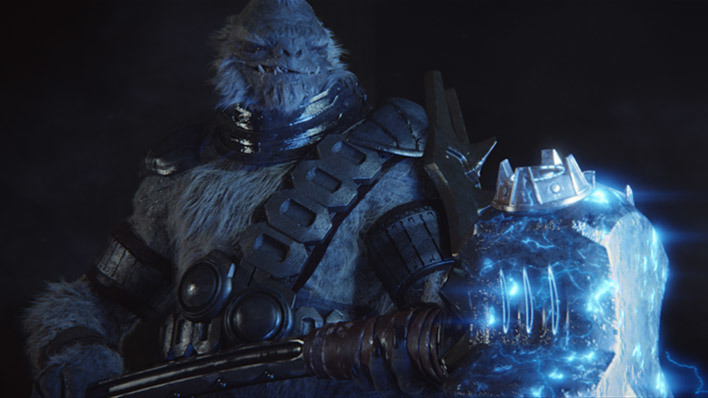 Saved by the grave mind (the consciousness of the ever growing flood parasite) Though 'Vadam was still in doubt about the true meaning of the Halo rings, he was slowly beginning to believe. In order to “show the truth” to 'Vadamee, the Gravemind teleported him to the Control Room where he learns first hand. 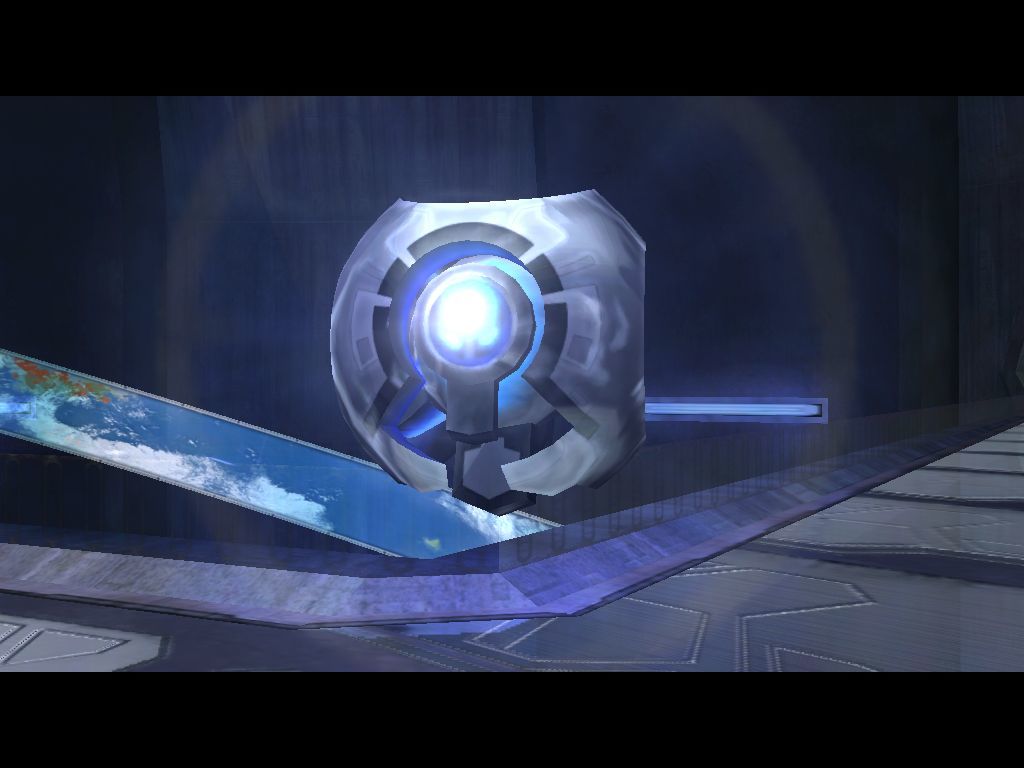 Arbiter is teamed with Master Chief to stop the covenant from activating the Halo array. They are successful. Their final battle was with Tartarus the leader of the Brutes a stone cold heartless killer that has a deep hate for the Sangheili

Vadamee fought several Brute Honour Guards before facing Tartarus, who was forcing Miranda Keyes to activate Installation 05. He was surprised to see the Arbiter still alive and there was a standoff between the two parties. The Arbiter asked 343 Guilty Spark, who was also present, what Halo’s true purpose was. The Monitor replied that the Halos were built “to destroy all sentient life in the galaxy” so that the Flood would die of starvation. In addition, the ones who built the rings, the Forerunners, died upon firing the rings as planned, contradicting the belief of their “transcendence.” This convinced the Arbiter of the truth that he had been repeatedly told. It was from that moment that 'Vadam’s faith in the Great Journey had been shattered, his alliance with the humans absolute, and the treachery of the High Prophets fully realised. 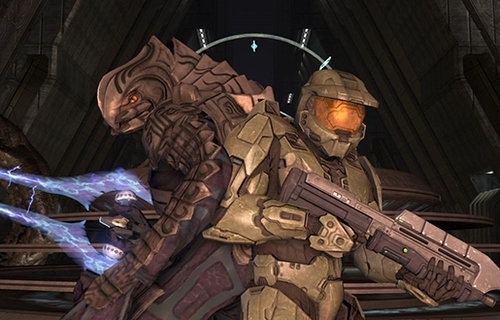 After Tartarus’ defeat on Delta Halo, 'Vadamee officially changed his surname to “'Vadam,” symbolising his resignation from the Covenant; the rest of the Sangheili followed suit.

Upon arriving on Earth with Johnson, 'Vadam and several of his allies discovered the Master Chief, who had just crashed landed on Earth as well. When the Master Chief regained consciousness from his long fall, he attempted to kill 'Vadam, but was stopped by Johnson, who explained to the Chief that the Arbiter and his kind have allied with Humanity. 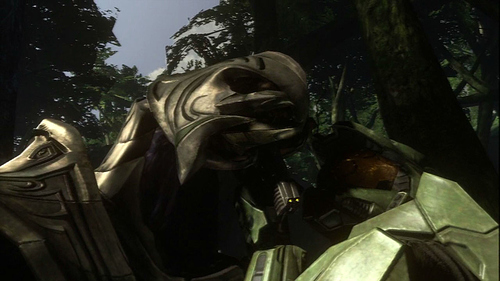 The Gravemind spoke through Truth, informing him that he was deluded in thinking that he would become a god. 'Vadam warned the Flood mind to not infect Truth, stating, “I will have my revenge on a Prophet, not a plague!” Thel held Truth by the neck, and forced him to watch helplessly as the Master Chief deactivated the Halo Rings. 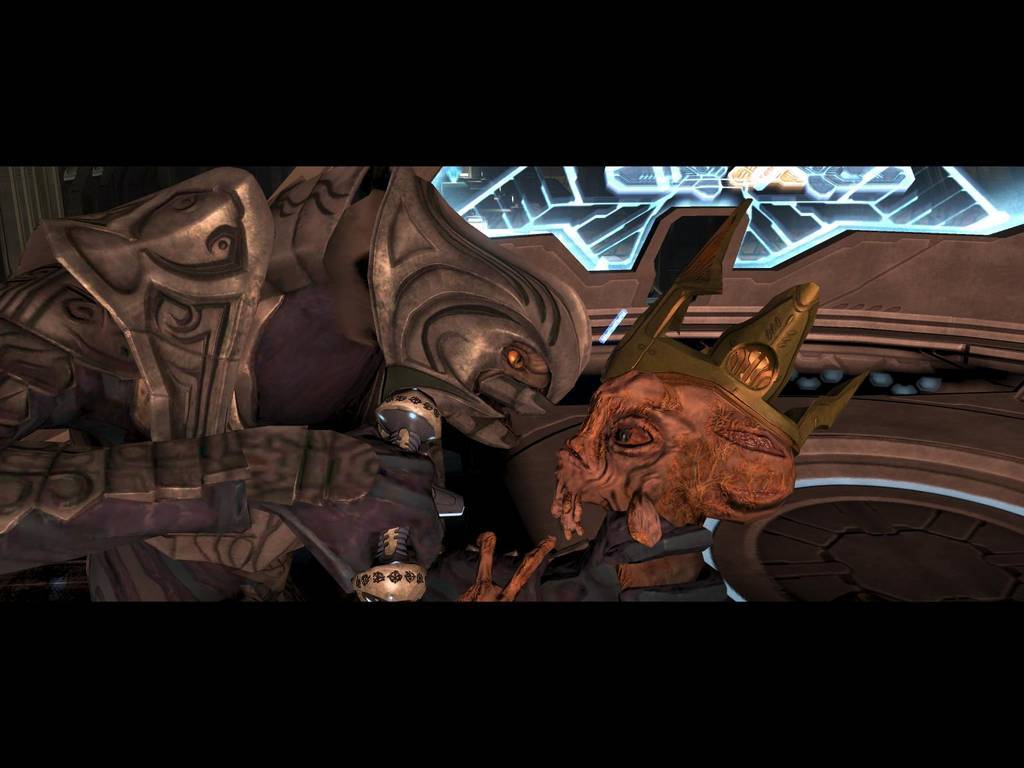 'Vadamee then took his revenge by executing Truth with his Energy Sword. It is at this point that John-117 appears to begin to trust Thel more, having witnessed the death of the Hierarch who called for Humanity’s destruction. John and Thel then faced the betrayal of the Flood’s allegiance with the abortion of Halo’s firing.

Arbiter manages to escape the destruction of the arck the final halo instilation and Master Chief is pulled deeper into slips space, he is asumed to be dead. Arbiter returns to earth to reunite with humanity. 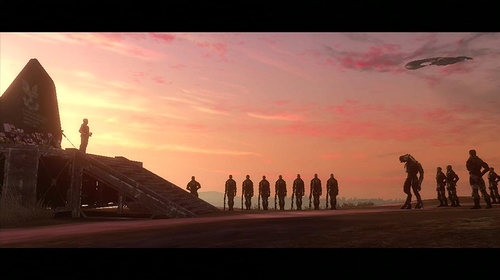 During the aftermath of the Human-Covenant War, Thel 'Vadamee continues to campaign with his fellow Sangheili for an indefinite peace with humanity.

Its at this point with the Sangheli leaving the covenant that the covenant cilvil war starts. Arbiter leads the resistance the swords of Sangheilious against the the covenant. 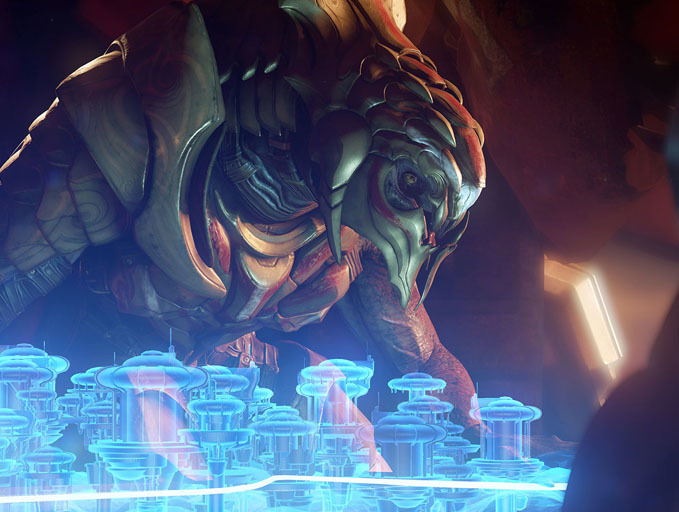 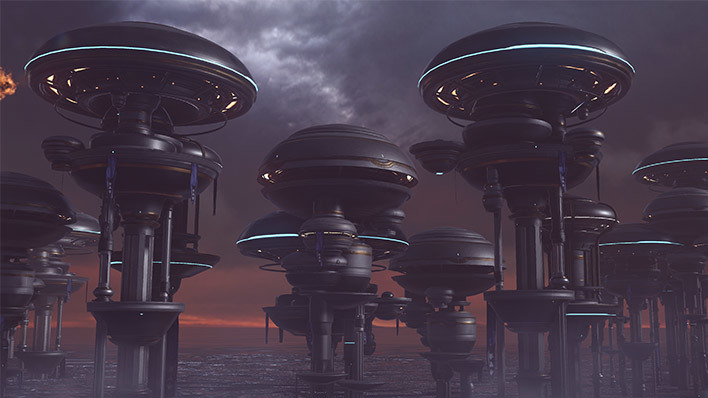 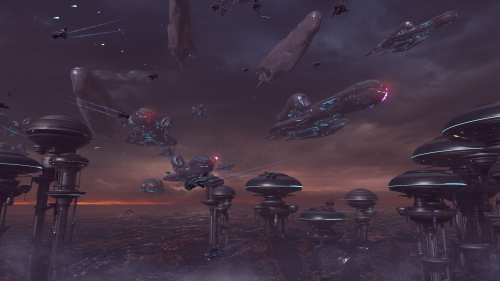 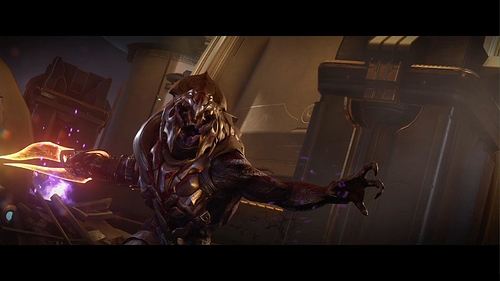 The battle is won and the home world of Sunaion falls to the Arbiters mite. The leader of the Sangheli grows stronger. 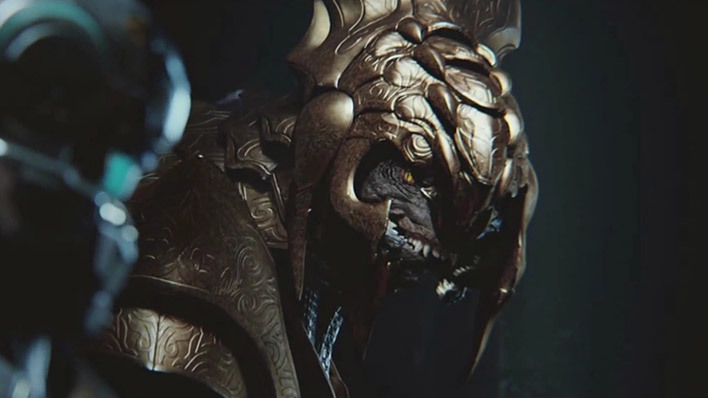 Well he certainly does have a long and varied career filled with numerous highs and lows, doesn’t he?

I love arbbyy hes so amazing!

I’m a HUGE Halo fan so I pretty much knew all this, you summed it up pretty well! Can’t wait to see how Arby plays in KI!

Thanks silver me too!!! Just wanted ppl here you know hardened FGC fans to have some decent visuals and story

Interested to see how the Halo universe connects to the KI universe in Arby’s story mode!

My guess hes not going to be part of the story at all. But all the same thel vadam is AWSOME

I can see them pulling something like “Gargos is too strong, PULL IN EVERYBODY FROM EVERY GAME” Type of deal haha!

Gosh it really could be that bad

No lie joanna would have fitted like a glove! But Arbiter is brilliant!

I mean, to be honest I didn’t expect Arby at all, he was SUCH a pleasant surprise! And I wasn’t all for Joanna, I could see why people wanted her and she would have been cool but I personally think she would be too similar to Orchid.

My guess hes not going to be part of the story at all. But all the same thel vadam is AWSOME
[/quote][quote=“SilverismHD, post:6, topic:4808, full:true”]
Interested to see how the Halo universe connects to the KI universe in Arby’s story mode!

You get the character with their associated moves and abilities, their stage and music, costumes, accessories, emblems, profile taunts, backgrounds, and maybe even some concept art - but that’s it! If that’s not enough for you, then well, you’re probably just too big of a fan.

Well if there’s already 2 characters out of Season 3’s story mode, hopefully that makes room for them to make this story mode incredible for the remaining of the cast!

Tarturus, the Ape with the hammer above, would have made for a more better guest character imo. KI needs a monkey character and he was perfect.

And Keiths right! They did say no story

Thanks @steelfantasy I hope so

even for the photos hehe. Halo is so epic

will NOT play ANY part in KI’s story…

Doesn’t mean they won’t have a non-canonical story mode though.

@doobydude23 i think the meant none at all but who knows they could do?