When is it coming out? I thought before Christmas? I only have gold pack 1-2 out so far I see.

When is it coming out? I thought before Christmas? I only have gold pack 1-2 out so far I see.

Not sure, maybe they had to delay it.

27th. I’ll put out pics or vids later this week if I can.

Today, according to this.

Probably won’t be till later today. I imagine we will get news within the next six or seven hours.

I assume that they are the terror skins we already know:Mira,Fulgore and Riptor.

Yep the pack of three we already know about. I wonder if there will be a gold pack 3 or terror pack 2 next Tuesday, they’ve nnow released all the packs we already knew about.

Next Tuesday should be Kilgore, so it’d probably be the week after.
I’m hoping for more Terror Packs (Especially for Wulf and Hisako), and a Golden Fulgore

I really like the Mirra terror skin in game, way more than I thought I would. It really pops on some stages.

Man a golden fulgore is the dream. I do love his terror colour though. Can’t believe a golden fulgore missed the first wave. It’s probably the only golden colour that’s makes sense! I’m not mad at any of them so far though to be fair.

#Thank You!
I’ve been wanting a Golden Fulgore for YEARS! Since Season 1 I’ve though Gold would look good on him. Throw on some royal purple for his eyes, claws, and ponytail, and he’d be freakin’ Perfect!

Now that would be epic!

I like how terror Riptor’s claws are red in plasma and so is the glowing energy…if only the claw swipe effects could match and maybe make the claws a bit more bright? o3o

other than that it’s pretty friggen’ cool!

Is paying money the only way to get these?

I was hoping buying the definitive edition would at least allow access to unlocking everything in the game, even if I had to work for it

So they released some official hero art on the KI Twitter for the Terror pack and oh my god I want it even more now! 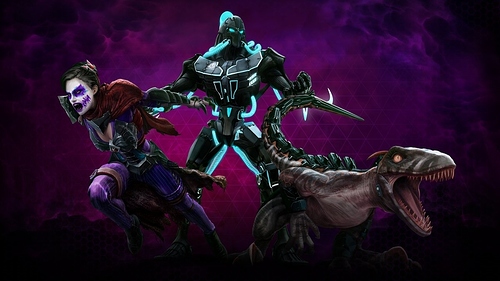