Tendencies That Keep Us From Getting Better

Saw an interesting post on Twitter today that listed out some of the mental blocks and tendencies that people can develop that keep them from getting better at the game. I know that I see some of these in myself, and I imagine most of us have hints of at least one or two of them, and perhaps even a goodly chunk. As ever, I think being aware of our flaws and intentional about fixing them is the best way to improve, so here’s the list, and here’s which ones I think I need to work on. 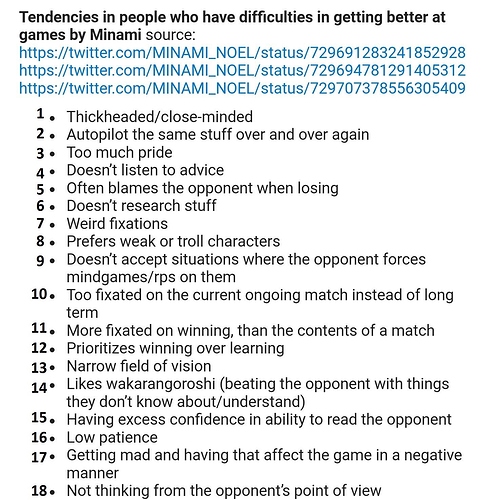 For myself, I’ve definitely got problems sometimes with numbers 11 and 13. I spent a LOT of my early KI days playing a lot and not really learning, because I was just so focused on winning that I rarely stopped to ask why certain things were working or not. And now, I can certainly say that I love hitting people with things they don’t know how to deal with, which can be strong in certain circumstances, but does little to prepare you for that moment when you meet the guy who can deal with your shenanigans. I’ve also got issues with numbers 2 and 6 at times. It’s really easy to develop flowchart tendencies if you’re used to dunking people, and I only head to the lab if I’m really jammed up on a particular setup or issue. Both of these can and do cost me games sometimes.

EDIT: replaced original pic with one where the numbers and bullets weren’t so poorly aligned.

Well, if your goal is to win everything you ever enter, then picking joke characters all the time is pretty much antithetical to your stated goal. If you want to challenge Daigo for SF4 supremacy, then you don’t do yourself any favors by picking Dan or Deejay. Sure, you might be able to pull it off (and there are very good Dan and Deejay players out there), but you’re also forcing yourself to work much, much harder than is strictly necessary to win rounds and games.

I think picking declared “scrub-tier” characters can make sense if the character just fits you like a glove (or a game like KI where the tiers are super compressed), but I also think it’s true that playing unviable characters just because the world thinks they’re unviable is a silly strategy if you’re trying to win big tournaments.

We play top tier characters, so I wouldn’t worry.

I definitely struggle with 2 & 5. I just go with the flow, and that can give me problems if someone can successfully break the flow. Then, I get nervous as I’m constantly trying to play out of my comfort zone. Me not researching why things work can get me in some trouble.

We play top tier characters, so I wouldn’t worry.

This guy gets it.

you don’t do yourself any favors by picking …Deejay.

How would someone stop doing number two even though it works so well a majority of the time? I need help with that.

I guess 2 and 14 are my biggest ones. But can you really blame me for going autopilot when the same series of mix ups works like 99.9% of the time?

Yep. Doing level one fireball ender with Fulgore into fireball cross up overhead hits 99% of the time for some reason.

Autopilot the same stuff over and over again - I take this as “the only way i start offense is jump-in HP into light AD”. Or my combo pattern is L, H, M, L, ender. It isnt terrible.

Too much pride - I swallowed my pride a long time ago…

Doesnt listen to advice - Steady try to learn, steal and adapt from anyone i see play. Even from outside of KI.

Often blames the opponent when losing - As in “they should not be beating me?” kind of blaming my opponent? Then no. Flat out, they beat me, end of story.

Doesnt research stuff - I think thats a strength for me, but only so far as it relates to my main and the game’s systems. Outside of that, not so much.

Weird fixation - I interpret that as “bad habits” and in that sense, yes, absolutely. Like i just noticed a string i use…

The overhead doesnt combo, and makes it tricky, but weak.

Prefers weak or troll characters - To be honest, my usual type of character is not the one i main. It’d be closer to Maya probably.

Doesnt accept situations where the opponent forces mind games/rps on them - Doesn’t accept? Im guessing like, doesn’t deal with? Its sucked, but i think i get it better than i used to.

Too fixated on the current ongoing match instead of the long term - I know i hoard resources like meter too much. Need to get better at it.

More fixiated on winning than the contents of a match - Had a moment where i got perfected in the first round. I could not figure what and why between rounds. Saw it as i need to elevate my thinking to where i notice this in the game, not just between rounds. Even today, saw a stream for a bit with LCD, and was suprised at how he seemingly easily called out his opponent’s play (Raven is raw).

Prioritizes winning over learning - No. Just the opposite, really.

Narrow field of vision - Im assuming this isnt some kind of metaphor, so no.

Likes wakarangoroshi - In other words, showing out… ■■■■■ that. A win is a win if were playing for points or tournament. Exhibition/casual? Not really even then. Just not interested.

Having excess confidence in ability to read the opponent - I feel like my ability to make reads is not nearly high enough, period.

Low patience - I have plenty. I have a career path that exercises it much more than this game ever will. I will admit ive cracked once or twice.

Getting mad and having that affect the game in a negative manner - Not usually. If i lose a tight game and get upset, first off, its at my totality of MY mistakes that cost me. Second, i dont get upset at in-game “upsetting behaviors”. Take a second, brush it off, back to grinding.

Not thinking from the opponents point of view - There are so many things to consider that this one is a constant work in progress.

All of the above (and then some).

#1 Close-minded
Just a little, I still refuse to try mantis combos because I think is too difficult and/or propense to miss.

#2 Auto-pilot the same stuff
I was worse in the past, now I’m trying more different techniques during the match (except mantis combos, yet…)

#3 Too much pride
Never

#7 Weird fixations
Didn’t understand that one

#9 Mindgames
I love it! Because in these type of matches you learn a lot!

#10 Fixated on current match instead long term
Big failure! Most of the time I don’t memorize the techniques of an opponent but I observe that they do this against me! this results in more losses over time.

#11 Fixated on winning
Winning is everything to me, needs to analyze more the matches I won and not just the ones I lost.

#12 Winning over learning
Overtime you are forced to stop and learn, I think it’s natural if you want to keep playing.

#14 Wakarangoroshi
You say Gimmicks? What’s the problem? I think this is part of the game.
For example, when Thunder activates his instinct I instantly run the whole instinct using event mantis to escape to the other side of screen, when it’s about to end I suddenly attack. It’s not stupid if it works!

#15 Excess confidence to read opponent
On the opposite, I lack confidence. And this leads me to more guess breaks than I wish.

#16 Low patience
A lot of players already told me this: you need to chill out! I think I need more months of play to learn this once and for all.

#17 Getting mad
Get mad to myself sometimes but I think this is good because when it happens I know it’s autocriticism and desire to not commit the same error again.

#18 Not think about opponent p.o.v.
50/100, need to improve this. It’s very interesting when the opponent foresees my moves like a mantis. I need more time for this.

How would someone stop doing number two even though it works so well a majority of the time?

I think the best way to break out of that one is to just seek out and play people who don’t fold like origami the instant you get a little momentum. Pit yourself against players who are good enough to recognize “automatic” play and punish you for it.

OH HEY COOL SOMEONE MADE A LIST OF MY PERSONALITY TRAITS!!!

*It’s not that I don’t LISTEN to advice, but that I’ll consistently miss opportunities to APPLY advice. I’ll see a situation playing out that I have been advised in, it will play out as it has x times before, and when the next phase of game arrives on it’s heels, I will mutter to myself “oh, ■■■■”.

**I’m not sure of what the author meant by “weird fixations,” but I will lose games because I fudged a sequence that I have practiced, and will become fixated on recreating or recognizing a situation wherein that sequence will be relevant, that I may try again and (hopefully) to success, and thus feel validated in my practice. But yo that’s dumb, and after a play or two in the opponents favor both my intent and my desperation tend to become obvious, and I become meat, and that situation doesn’t arrive again. It shows me stuff about myself that I don’t like. Let’s not get personal, heh…

But oh dear god autopilot is my worst frenemy.

Oh I see how that would work. That means we should have a long set this weekend

So in short… I lose because I chose Sadira…