Should KI add a serial killer in KI? Like they can have someone who is a psychopath like Bryan Fury. Perhaps someone who possesses Freddy Krueger’s claws? This kind of character would be after the killer.

After reading the post above, and seeing other members on the forum discussing of a slasher themed character in various threads, what would you all say about this idea for a new Killer Instinct character…
(Gonna be a long one, so please strap in!) 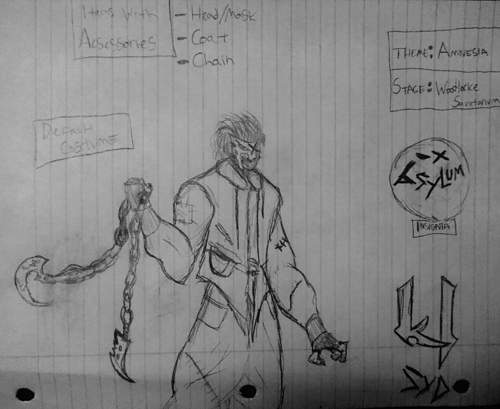 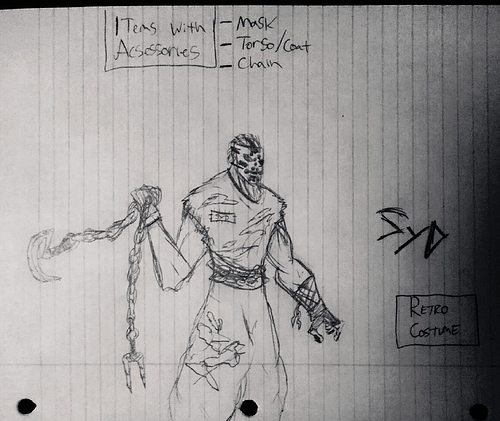 Syd, for lack of better words, is a murderous pig. Clouded by childhood trauma, as well of horrors he had to endure whilst inside the Woodlocke Sanitarium. A home built for children to adults, to help treat their mental illnesses. But they weren’t as honest as they appeared…

Inside the facility, they actually tortured the now classed inmates. Doing outrageous experiments that scarred Syd’s very own mind and body, eventually causing his left eye to be removed during the process of some he had to endure. Some patients were even taken out of their own cells, and moved to an unknown location, as Syd would phrase it…

“The kids were escorted out of the rooms, only thing I really remember was that logo, UltraTech. I’ll never forget that crooked red triangle. Those doctors in their fancy white coats took them, each kid, teen, and adult. One by one. But they never came back. Soon, the halls grew quieter, and quieter. While inside each room, people were still being dissected like animals, and being thrown away like trash.”

Syd’s life prior to the institution was also quite heartbreaking, as his father killed his mother in a state of blind rage one night, while Syd overheard in the other room when he was trying to sleep. His father then put Syd up for adoption the next day, and while in a drunk state, his father then hung himself moments after he returned to his now empty home.

Losing his mother and forced to live in a new home, Syd became distant. Until one unforgettable day, when his foster dad begins scolding Syd in a furious rant, Syd having an urge he never felt before, he eventually snapped. He lunged at his foster dad, and bashed his head with a near by hammer until his foster dad stopped moving.

The foster mother, just now coming home from work, screams as she sees the horrendous murder in her own home. Out of fear, anger, and grief, she sends Syd to Woodlocke Sanitarium, to cure his poisoned mind, however little did they both know his nightmares were far from over. From childhood to adulthood, he stayed there, until the building eventually was shut down for health violations. Even then, he never left…

Back to modern day, Syd is now a low life degenerat, living in the now abandoned Sanitarium. He also hides in alleys, stalking and killing people, pondering who deserves to be hung by his chain, and gorged by his hook. As of the building’s closing, he’d killed 23 people, some who previously worked for the now closed institute.
After a recent killing, he realizes something odd on the man’s shirt, he sees a logo for UltraTech. Memories begin rushing back to him, as Syd decides to pay the company a little visit, while also maming anyone who stands in his way.

“If you cowards are responsible for all those horrors in that asylum, then someone needs to put you in your place… Permanently.” 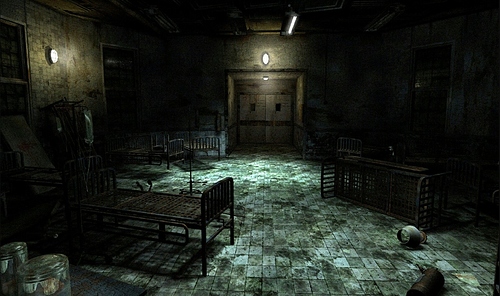 -Something akin to this would be what I picture. Except with rats running along the ground, and maybe ghosts of murdered inmates begin wondering the halls during the ultra combo.

Gameplay: Rushdown/Grappler is the best that comes to mind. Several of his attacks revolve around his chain and hook, which could definitely be used to haul the opponent over in multiple ways, maybe even a parry where he uses the chain to deflect attacks. But his hook and knife can also be wielded for close combat, which allows him to charge right in, and hack away until your health starts dropping.

For his theme, it definitely needs to be haunting.
World of Goo’s “Cog in the Machine” comes to mind for inspiration. (Video Below) Maybe for the idle state.

Intro: (Hook is dragged along the ground making a loud shrieking sound, the chain gets yanked rapidly, then wraps around his arm until the hook is now in his hand.)

“(Maniacal Laughter) Another body for the pile…”

Outro: (Camera shakes frantically, almost as if the camera man himself has been stabbed)

“(Laughter continued) Don’t worry, this will only sting for a moment…”

(He then lunges at the camera with the knife end of his chain in hand, ready to kill his newest victim.)

Also when the match runs out of time, his winning animation will be him licking the hook, then laughing sadistically.

If he loses, he’ll violently strangle himself with his own chain, until he slips into unconsciousness.

Accessories (First 3 are Default, other 3 are Retro)

Each one follows changing his Mask, Coat, and the tools he uses at the end of the chain. (A Hook and Knife are his default weapons) 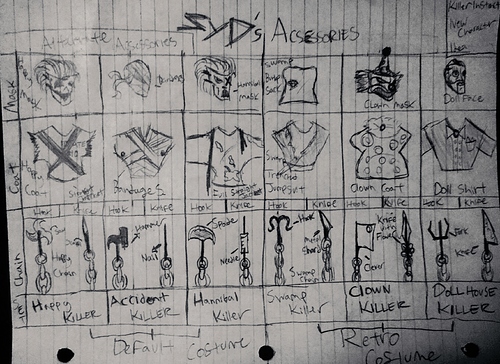 Taunt: (Head leans back as he begins laughing hysterically.)

And with that, there is my idea for a horror movie slasher in Killer Instinct.
Would this concept fill the role, or would you prefer a different take on the idea?

Any feedback is welcomed.

That backstory is amazing. Works perfectly. I say we don’t make him a standard grappler. Lets make it crazy. Make him a full screen grappler. Full screen slow command grab that when hits, traps the opponent in place while Syd walks forward into a combo. Full screen command grab opener seems really cool.

I wonder, what would his Instinct Mode would be.

Maybe he lowers the chain, and becomes more frantic as he swings it around the arena. Considering he’d be a very unstable person, It’d definitely fit his character.

I love your ideas. Iron Galaxy should hired you!

But he seems… Big, strong. I mean, if he uses his chain, grabs Aganos and brings him up close, that’s impressive and he has to be very strong to do it.

In the other side, if he throws the hook, hits Kim-Wu, and pulls himself in… Well, seems weird XD

Is he only going to use his hook to grapple? I mean, his weapons being on a chain would surely be useful for long-range poke and antiair command normals which pull the opponent in, like Axl Low from Guilty Gear. I suppose it’d be different from Kan-Ra in that he’d try to keep his opponent from escaping rather than keep them away until some traps are prepared.

Liking the idea, by the way.

How about it being based on Ghost Rider from Mahvel. Long range normals that can grapple at a distance, pull the opponents in, send them out for a wall bounce, or ranged combos. I think this can be interesting. Perhaps instead of Shadow Meter, he has fear meter? Certain moves scare the opponent and when the Fear Meter is full, he gets access to a normal command grab that insta kills(overpowered I know) the opponent? He can combo at full screen but not with the KI combo system. Mainly manuals that pull the opponent closer/further. One of his special moves can be walk of fear. The classic horror walk. It can be confirmed from certain full screen moves that allows Syd to approach his opponent and add fear. Does no damage and only walks forward.

But what about a chainsaw instead of a chain? Or both?

And seeing your version of a serial killer character, what would you do next? I hope you get to see the rest of my threads.

True. I’ll admit, I was more focused on the visuals and story behind the idea, but then again mentioning his status as a grappling type, and noting the main weapon he uses while in combat, that being a chain with a small tool, that itself I think could bring good conversation and ideas of what can and can’t be done with a character like this, at least in his move set.

Getting the ball rolling as it were.

Since he’s a killer, ever watched Death Note? Maybe relate something to that.

I like that idea of him getting more PO’ed while in Instinct Mode, but say instead of him getting roided up like Bane or Broly, it just makes him faster and much more unpredictable (sorta going back to the idea of him lowering the chain, and swinging it at farther areas of the fight.)

A Fear Meter you say?

Now that would be an interesting mechanic.

This really ain’t half bad man. I really like this idea and wouldn’t mind it being in the game.

How about it being based on Ghost Rider from Mahvel. Long range normals that can grapple at a distance, pull the opponents in, send them out for a wall bounce, or ranged combos. I think this can be interesting. Perhaps instead of Shadow Meter, he has fear meter? Certain moves scare the opponent and when the Fear Meter is full, he gets access to a normal command grab that insta kills(overpowered I know) the opponent? He can combo at full screen but not with the KI combo system. Mainly manuals that pull the opponent closer/further. One of his special moves can be walk of fear. The classic horror walk. It can be confirmed from certain full screen moves that allows Syd to approach his opponent and add fear. Does no damage and only walks forward.

-Uses his chain to attack from the distance
-Command grab leads to combo, pulling his opponent up close
-Bad mobility, great damage up close, easy to break, good dealing unblockable damage
-Fear grab: Up close command grab, also ender. Deals minor damage(something like Aganos payload asault ender), fills fear meter
-Fear meter: Once filled, your next special is unblockable. Useful for his long range chain attack.
-Instinct: His fear meter gets filled, once he uses his next special, the fear meter will refill automatically, giving him access to several unblockables during his instinct

Something akin to this would be what I picture. Except with rats running along the ground, and maybe ghosts of murdered inmates begin wondering the halls during the ultra combo.

Don’t lke the idea of ghosts in his stage. Maybe the building starts to break apart and remnants of some victims were to randomly pop out/drop from the cracks?

If he loses, he’ll violently strangle himself with his own chain, until he slips into unconsciousness.

A little much, me thinks. I’d suggest one where he pulls on the chain hard enough to make it snap and throw it off screen.

Shadow: Similar to the L version, but it’s unblockable, deals more damage, and leads to combo

Shadow version’s first hit sinks into the opponent’s body and the other 4 hits are Syd pulling the chain to bring the opponent closer, making the sounds of flesh tearing until the last hit pulls the hook out through them and leaves them in an opener state. You can only manual to start a combo though, that would be my drawback for this move.

I don’t think he needs an additional mechanic, he can be pretty deadly with the kind of range that chain would allow.