Stagger and flipout should never been introduced

Combo breakers should of never changed

The season 1 characters have always been the most used by pros. And they all got buffs to deal with Season 3 characters.

Also, the combo breaking system has been improved. Before you could get around 30% unbreakable damage, or a free Sweep set-up. IG changed that.

So what’s the problem?

Not another one. About time this happened. First characters. Now mechanics. People will always find something. It isn’t like the originals. The IG characters do not overpower the KI OG cast. Sorry that combo breakers where changed so it doesn’t give a player the advantage. Do you know what else is different from the originals? New music. New stages. IF YOU WANTED THE ORIGINALS,GO PLAY THE ORIGINALS!!! 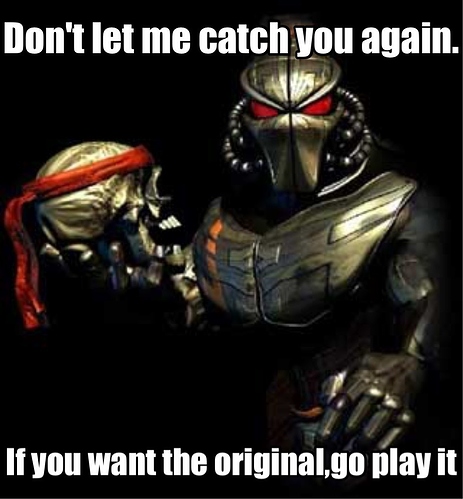 Again, this is Microsoft’s baby which they’re jointly working on with Iron Galaxy so they have had the biggest influence in the making of the game. It’s not all Iron Galaxy.

Also, if you’re having trouble with Combo Breakers reseting the match into neutral, leaving the game more in your hands, instead of a knockdown where momentum swings like a metronome, then maybe start asking questions on how to adjust.

I don’t like the flipouts but have the option not to use them.

Yeah… sure… Spinal and Sadira are worst than Kim Wu or Cinder. Suuuuure, mate.

(In case someone do not catch it, it’s a sarcasm)

Is it me or there are a lot of complaints lately?

I feel if you wanted to add new mechanics wait for a sequel. Dh made it a point to keep ki the way we remembered now its like a whole new game dont like it all

Hooray. No new mechanics unless you have a sequel. $60 for new mechanics. “Dh made it a point to keep ki the way we remembered it”. Who is this we? It is like a new game because it is. This Ki is not the originals. Now can you actually explain why the mechanics are bad? Saying that it is new and I don’t like it is not a valid complaint.

Just like SF4 into USF4 right. You need to pay in order to get the update with new mechanics. Sorry they are changing the combo breaker so it resets the game in neutral instead of giving a player the advantage. Sorry they added stagger which you don’t have to use. Sorry they added a new reset tool that you don’t have to use. So what if it differs. IT IS A DIFFERENT SEASON. Why would they make a sequal? It doesn’t fit with the model of the game. Instead,they are doing updates by Season. It is different from Season 1 because it isn’t Season 1.

Leaving the “we” aside…

If this was really “classic” KI we’d…

We’re obviously not the original KI, because KI needed to evolve from what it was 22 years ago to what it can be today. We’re still in the process of figuring out all the elements that make KI what it is, but it’s all centered on combos, breaking, and mind-games, with a promise that no player is ever left inactive for long. We’ll continue to explore how we can manifest that attitude.

Sometimes things we do won’t work out and we’ll address them. However specifically on stagger and filpout, they help continue the mental game and keep the momentum of play going in a fair way. Wins in our book.

Too many mind games not enough emphasis on footises or fundamentals imo. Alot of people i know still feel ki is way to complicated and they play guilty gear and blazblue exclusively.

Mind games are a bad thing? You act like footsies and fundamentals aren’t there. Proof of this please? They are there. Stop pulling ■■■■ from your arse.

You cant win with just footises tho you have to do combos yes thats what kis known for but why add more mind games and complicity if there is no fundamentals or footises ? Basics before gimmicks imo

You should think of it more this way:

With no agreed upon definition of what “fundamentals” entails, it’s way too broad of a term to throw out there anyway.

No offense, but it sounds like you just want to play KI like you’d play some other fighting games, rather than embrace what is unique to KI.

Ki lost what was unique to ki with changing gameplay mechanics

…but why add more mind games and complicity if there is no fundamentals or footises…?

Except there is, perhaps not the way you like it, per say.

Too many mind games not enough emphasis on footises or fundamentals imo. Alot of people i know still feel ki is way to complicated and they play guilty gear and blazblue exclusively.

Are these two separate thoughts? I’m not very familiar with Blazblue, but from what I’ve played and seen of Guilty Gear, that game is far from fundamental and footsie based. I’d argue it’s more complicated than KI.

what i got from this: enough with gameplay changes…