StarFox 2 is going to be included as well.
Sign me up, I need one to go next to my NES mini!!!

One thing I noticed that’s neat about this system unlike the NES mini is they’re using the same style controller ports as a standard SNES. The NEW mini used Wiimote ports. The upside to that though is you can use any old Wii classic controller, but it’s just not the same as the authentic rectangle NES controllers.

Gee, I can’t wait to get my hand o- WHAT DO YOU MEAN THEY’RE OUT OF STOCK?!

Shame the game selection isn’t better. I’ll have to pass.

Honestly I’m guessing internally the hardware won’t be any different than the NES mini, and via hack it’s capable of running pretty much the entire SNES library (with exceptions like the super scope games), as well as N64 games.

BTW…I had to do this: 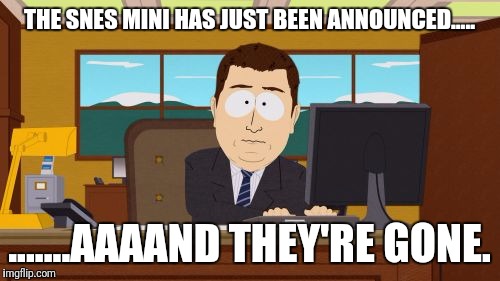 Now they just gotta do the N64. And maybe the Game Boy and GBA. Can’t see them going further than that though.

I just saw on Twitter IGN reported that Nintendo said they plan to produce “significantly more” SNES minis than the NES ones last year. I certainly hope so. I had actually went ahead and overpaid (a little more than double) to secure a NES mini earlier this year, and it has been so awesome I don’t regret it considering the cancellation, but if at all possible I’d rather not do that again.

I would like one, however I would rather have a virtual console on my Switch. Everything in one place, especially now that I didnt get a nes classic.

I’m still waiting for a console that allows you to play entire libraries of pre-32 bit consoles… Atari, NES, SNES, Genesis, Game Boy, Neo Geo… I wonder if a hacked SNES Mini would be able to do that…

I’m waiting for a proper FF6 release on the switch.

Yes the steam one is okay… but it looks bad…

If the internal hardware is the same as the NES mini, it’s likely that it might. The only limiting factor that I know of on the NES one is the internal memory is only 512 Mb.

I’m making the assumption that the guts of the SNES are going to be near identical to the NES one…there’s no real reason for it not to be from a manufacturing standpoint. It’d likely be cheaper to just swap out the outer shell.

Can you connect an external drive to the NES Mini?

Not that I’m aware of.

Pretty cool, but just a hair away from my birth console.

If Nintendo 64 gets a mini treatment, I will buy it the instant it hits shelves. Though, I do hope Nintendo makes enough supply this time around. Always annoyed me that they never stock enough products for anything besides amiibos.

im gonna scalp the hell outta this one, i lost out on 600 bucks last time for NES mini lmao need that $$$$ for partzz

From what this is showing there are a couple of new details: it uses the same controller ports as the Wiimotes/nes classic, it just has a faux snes port panel covering the controller ports. Also something I’m happy about, earlier pics made the buttons look like all 4 face buttons were going to be convex on top where originally the X & Y buttons were concave, and judging from this video they’re just like the original with the concave buttons. I know it’s a minor detail, but if the reason for making this is the nostalgic experience, that small detail would have felt off.

I’ve also been checking around for when/if preorders are going to be available. From my understanding in Europe what few stores have already put it up for preorder were sold out in minutes. But from what I hear the initial batch is going to be more than what they made of the NES mini all total, so they should be easier to find… in theory anyway.

The HDD is fixed.
Nice collectors piece though.

So…apparently Best Buy and Amazon put up pre-orders last night and they already sold out…both of them were in minutes.

The thing that bothered me is I was signed up for notifications on Amazon’s preorder page, and they put up an entirely new page so no-one got notified. I found out just late enough that I was able to get one in my cart, and then they sold out.