Since everyone is talking random tech stuff all over the forums in different threads I figured it be easier to just have a tech thread for everyone to come to. Hopefully it’ll be as active as Hisako’s S2 tech thread was. So, who’s found some dirt?

Just some simple things, but…

One of my favorite tricks is to stick an orb on the enemy with a throw, then scuttle backwards to the other side of the screen. Then, as soon as they give chase, BOOM! FULL SCREEN OVERHEAD!

Also. A neat trick to do with her instinct is to pop it, then use the delayed Spirit Slice (probably best if canceled from Shin Ryo Zan). The enemy will try to block, but the strike doesn’t come out right away, leaving them wide open to the grab.

After some lab time and using Lemon’s example:

Exchange ender > Back dash > Orb > Light slash to stay in front, medium slash to go behind. You recover in time to block DPs, fireball hits meaty, go for mix up.

Exchange ender > Forward dash > Delay Orb > Jump over HK. You land in time to block DPs, fireball hits meaty, go for mix up. Can be backdashed.

And the holy grail of my day one finds:
Exchange ender > Jump over > Low orb > standing MP > Forward dash cross up attack. Can’t be DPd. At all. Even with an instinct cancel into DP, the Fireball hits meaty and stuffs it before the DP gets high enough to hit you, also stuffs anything non invincibe. Fireball hits the instant you appear on the other side so it has to be blocked the opposite direction. Oh, and they also can’t block the orb and shadow counter the cross up hit because the two hit on basically the same frame. Only escape is to use projectile invincible shadow move and even then it won’t actually hit Shisako just get them out of the setup.

(On a side note, I love how the meaty fireball hits people out of DPs in a grounded state letting you combo.)

If you ever manage to land a heavy jump-in with her, you can get some very solid damage that can only be prevented by a guess break on moves whose strengths have no distinction.

This essentially gives you a midscreen wallsplat ender, and none of the breakable parts look any different from each other. After a medium or heavy overhead, you can get a throw for about 25%, then go for another ambiguous crossup (which she’s good at).

Instead of a throw, you can also manual anything you want after the stagger and still have all the KV in the world to maximize lockout damage.

Instinct can be cruel:

Like, even if you simply wanted to eat the grab and not deal with the pressure you still have to guess right on the mix ups because if you get hit the grab won’t land. And it’s not like those mix ups are easy to guess on.

Shinsako’s damage is kind of weird. Her enders aren’t that strong, but she has a handful of options that hit for serious raw damage. Her shadow linkers are pretty average too. I think her damage is going to work out to be average, maybe above average; if she slips an option like rekka rekka overhead by without getting broken that can lead to big damage situations but otherwise her damage isn’t anything notable. One wrinkle: her HKD ender doesn’t actually give her that much advantage, the exchange ender is much better for that, but it’s quite a bit weaker in terms of damage.

Stand HP and toward MP are very strong pokes, far MK is very plus on hit/block, combos into itself on counter hit, and vacuums slightly on block, far HK staggers and is super plus on block, close MK is 6 frames of startup and +1 on block, she has two versions of crouch HP that are both excellent anti-airs, and close HP is two hits and very plus on block. Her range is good, but she also retains decent-to-great advantage on most of her moves on block. As far as her jumping normals go, jump MK has a killer downward angle, jump HK is a godlike crossup, and jump HP has huge range with some limited crossup ability–pretty much the same as regular hisako.

Shinsako has to walk to get places. Her dash is better as a mixup tool, and her forward-advancing specials are unsafe. However, things change once a spirit orb is onscreen. Spirit slices can be safe with the right orb placement, and air ORZ can even be plus if the fireball’s hit is staggered properly. Also, if you use a normal to send a fireball out, it’s pretty safe to teleport in afterward. Placing a spirit orb has a decent amount of recovery though, so it may end up being risky to just toss one out.

Each of shinsako’s normals gives her a different version of her fireball when she cuts a spirit orb. Most notable versions, imo:

The others are useful in various ways but those cover a pretty broad range of neutral applications.

Shinsako’s exchange ender offers a ludicrous amount of advantage, enough to do 2.5 jumps before your opponent wakes up. As a result, she has some brutal setups from it. If you do exchange, forward spirit orb, jump over, close MK, the fireball will connect as a meaty but you’ll have plenty of time to block your opponent attempting a reversal. If you substitute light spirit slice for close MK, the fireball will be a meaty crossup you can manual from. This is just one setup, you’ll want to experiment with other combinations of fireballs and sword moves to find her really nasty stuff.

Note that on some skinny characters, for instance maya, you’ll get far MK instead of close MK. In this situation you’ll want to use a different button, or a different setup.

Some very nice stuff right off the bat! @sithlordedp that was a very nice sequence, her vortex seems really strong, loved it.

Can’t wait to have the time to lab her up!

While it’s not projectile invincible, I’ve noticed that Shadow Spirit Slice can go under a few specific projectiles with the right spacing and timing. It works for Jago’s non-shadow fireball and Maya’s dagger toss.

Her Heavy DP has good damage and really nice range. It’s really good for catching jump ins (and even jump outs!) and since it has Invincibility it’s a great wakeup tool.

It’s kinda unusual that her True DP is on the Heavy, since most other characters have it on only the light version of only one strength is invulnerable. It means that her wakeup is actually a pretty serious threat, because that heavy button hits pretty hard.

Now, the other versions of Awakened Soul seem to serve a different purpose: they can be used as AA tools, but they’re much better for juggling. MK functions similarly to Eyedol’s Medium Uppercut, able to be repeated or to leave room for normals. Light doesn’t have a lot of inherent juggle power, but it can be canceled right into Shadow Shin Air for a recapture. Good for if you cancel into it from the rekka and want to capitalize.

Her Heavy DP has good damage and really nice range.

The problem is on jump ins and neutral jumpers, it can go right under them and completely whiff. It goes forward at first then up, like the letter L. It’s not a straight diagonal like Jago’s, so it can miss things you normally would nail with other character’s DPs.

Not sure if this is tech or not but with the orb setups but on hit you can manual a sHP and go into combo pretty reliably off any projectile hit if you’re in range. fMP also manuals into it.

Here’s something goofy. Because summoning an orb while jumping forward shoots Shisako forward, if you do it as soon as you switch sides when you jump over someone she’ll change her jump direction and fly back over where she started. 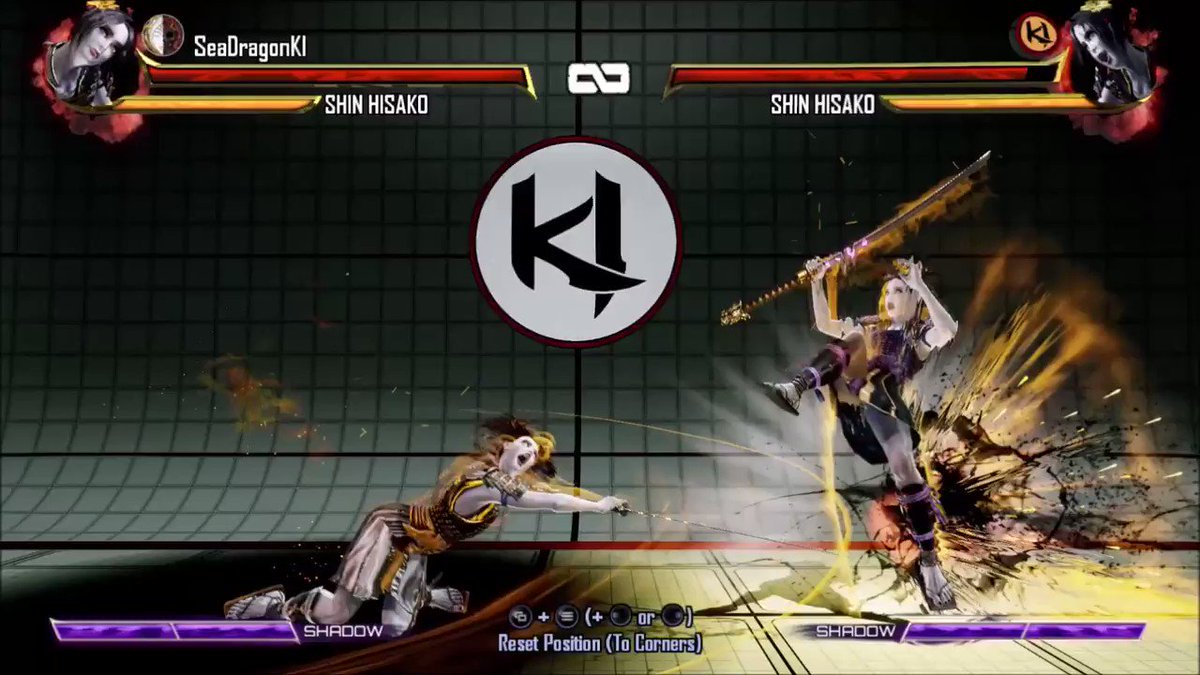 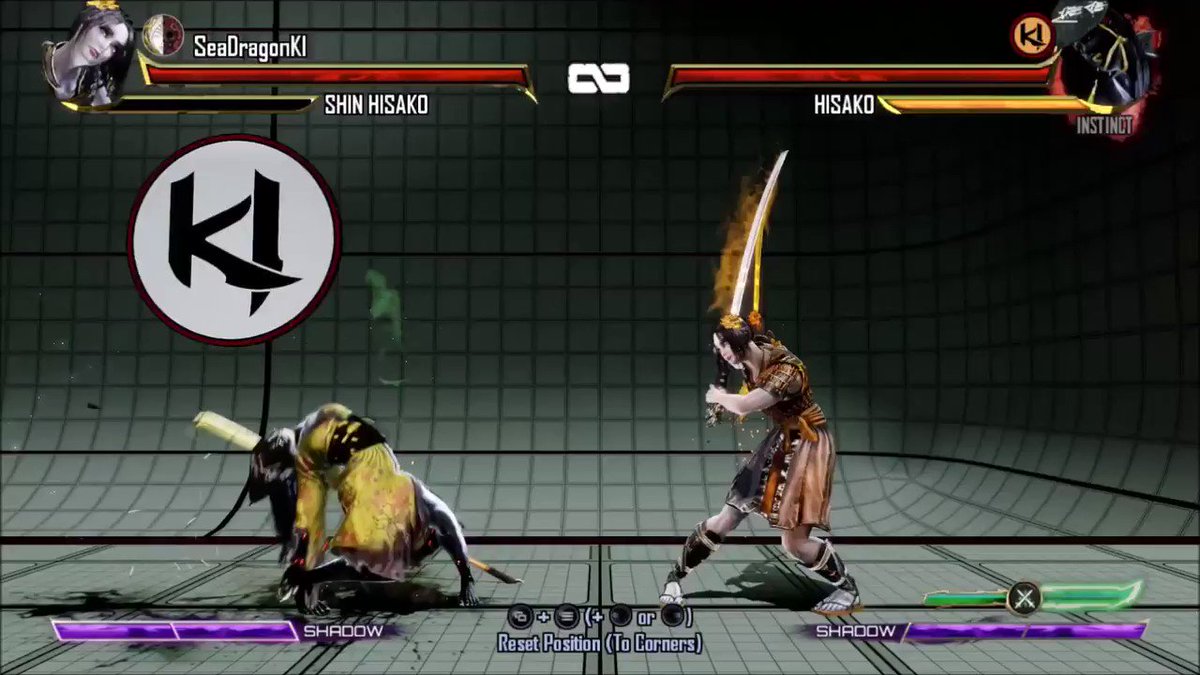 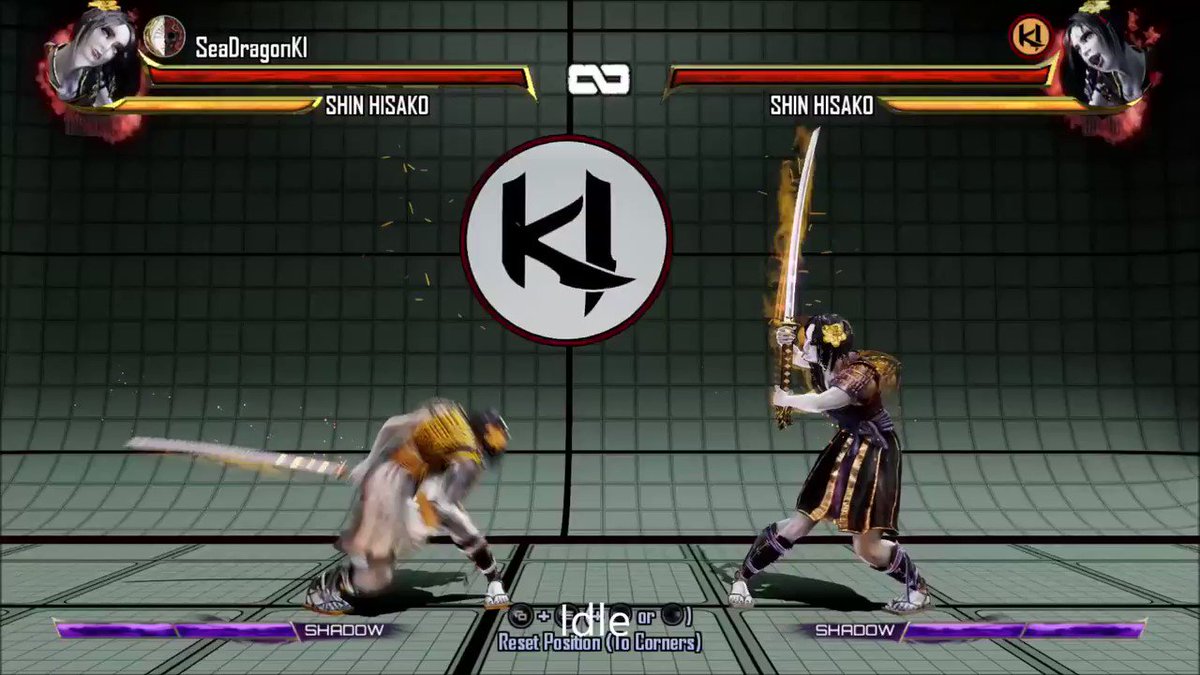 Are the hands supposed to vanish when the instinct ends?

In this video Shisako summons the hands at the very end of her instinct, they chase me for nearly two minutes before i get KO and they finally take a piece of my soul to the abyss. I even tried to give them a peaceful handshake.

I don’t know what you posted but my browser keeps trying to download it as soon as I open this page.

I think you need to have flash player enabled /installed to be able to see it.